After Twitter took the major step Friday of permanently banning President Trump’s @realdonaldtrump Twitter account, the President aimed to get the last word in through his government account @POTUS which has a fraction of the Twitter followers but still offered the President a megaphone on the service to send out a few last tweets.

The tweets were deleted within minutes by Twitter which does not allow banned individuals to circumvent a full ban by tweeting under alternate accounts.

In screenshots captured by TechCrunch, Trump responds to the account ban by accusing Twitter employees of conspiring with his political opponents. “As I have been saying for a long time, Twitter has gone further and further in banning free speech, and tonight, Twitter employees have coordinated with the Democrats and Radical Left in removing my account from their platform, to silence me — and YOU, the 75,000,000 great patriots who voted for me.” 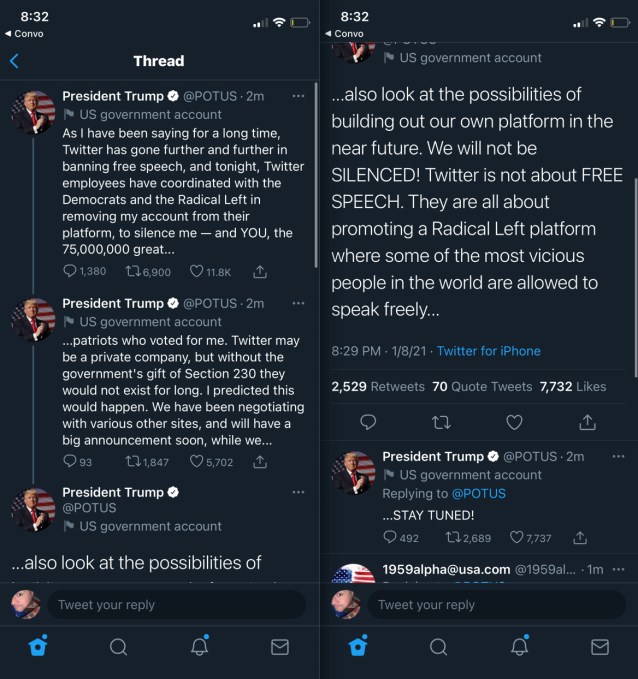 The President’s rant further contends that he will soon be joining a new platform or starting his own. Many contended Trump would join right wing social media site Parler following the ban, though Friday afternoon the site was removed from the Google Play Store with the company saying Apple had threatened to suspend them as well.

“We have been negotiating with various other sites, and will have a big announcement soon, while we also look at the possibilities of building out our own platform in the near future,” other tweets from the @POTUS account read in part.

In a statement to TechCrunch, A Twitter spokesperson wrote, “As we’ve said, using another account to try to evade a suspension is against our rules. We have taken steps to enforce this with regard to recent Tweets from the @POTUS account. For government accounts, such as @POTUS and @WhiteHouse, we will not suspend those accounts permanently but will take action to limit their use.”