Twitter took a new action against President Trump’s account Wednesday, adding a large, pop-up warning message to his latest tweet addressing the ongoing chaos on Capitol Hill. The company has restricted engagement on the tweet, citing a “risk of violence.”

Trump’s new message to his mob of angry supporters came in video form, following an earlier tweet encouraging the crowd to be “peaceful.” In the video, Trump both affirmed his supporters’ conspiracy-rooted grievances and gently encouraged them to leave.

“I know your pain. I know you’re hurt. We had an election that was stolen from us. It was a landslide election and everyone knows it. Especially the other side. But you have to go home now,” Trump said. “Go home, we love you. You’re very special.” 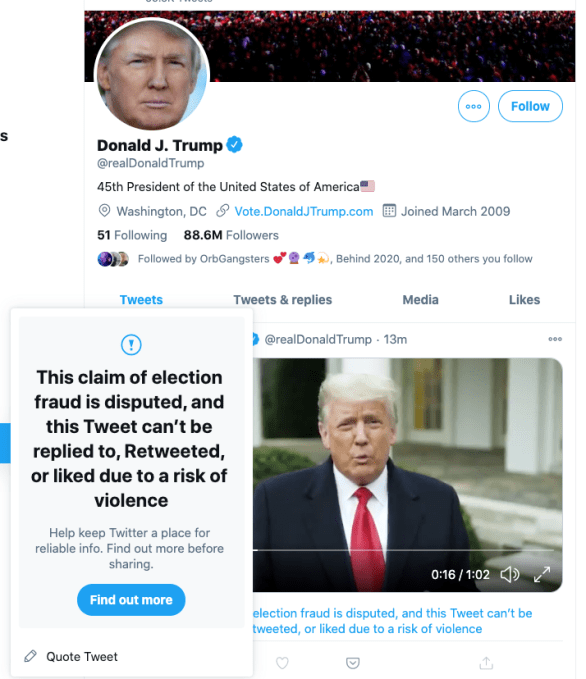 A crowd of agitated Trump supporters broke into the U.S. Capitol building in Washington, D.C. Wednesday, storming into congressional chambers and even invading the office of House Speaker Nancy Pelosi. The effort, connected to the “Stop the Steal” movement which Trump has regularly encouraged, happened as Congress was meeting to certify President-elect Joe Biden’s electoral win.

Twitter has previously hidden the president’s rule-breaking tweets, affixed them with small warning labels and limited their engagement, but the large pop-up is a tool we hadn’t yet seen the company use. Twitter said today that it would “[explore] other escalated enforcement actions” in light of the situation unfolding at the Capitol. It’s not clear if the pop-up is appearing for all users and we’ve asked the company if this was one of the escalated measures it referred to.

“In regard to the ongoing situation in Washington, DC, Twitter’s Trust & Safety teams are working to protect the public conversation occurring on the service and will take action on any content that violates the Twitter Rules,” a Twitter spokesperson said. “Let us be clear: Threats of and calls to violence have no place on Twitter, and we will enforce our policies accordingly.”

Update: Shortly after restricting the video, Twitter restricted another tweet by Trump complaining of a “sacred landslide election” being “stripped away from great patriots.” 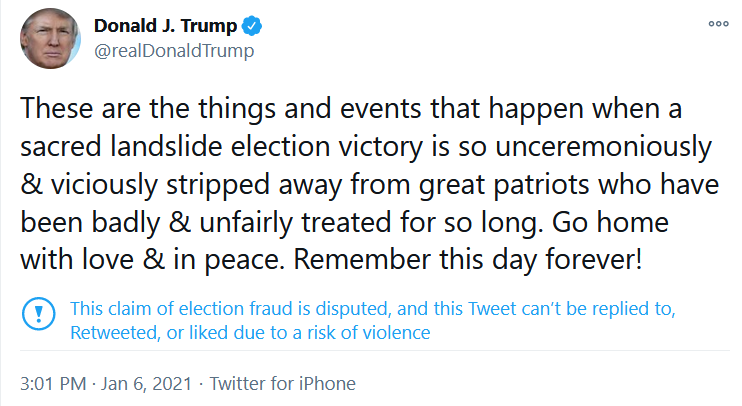