Online video platform Biteable, a startup that makes it easier to create polished and professional videos using templates and a library of images and animations, has raised $7 million in Series A funding led by Cloud Apps Capital Partners. The service today competes with products from Vimeo, Canva, Adobe and others, but focuses on creating video assets that have more staying power than temporary social videos.

These sort of videos are in more demand than ever, as the pandemic has prompted increased use of video communications — particularly among smaller businesses — which has also helped Biteable to grow, the company says.

“[The pandemic] accelerated the move toward video that was already happening,” notes Biteable CEO Brent Chudoba, who joined the company at the end of last year. “It helped, obviously, things like Zoom and products like Loom. We saw a benefit, as well. I think, actually, we’ll see an even bigger benefit over time as companies are now used to working and sharing messages remotely, and having to get more creative in how they distribute information,” he says.

The startup itself was originally co-founded in 2015 in Hobart, Australia by CTO Tommy Fotak, Simon Westlake, and James MacGregor. Fotak’s background was in software development, while Westlake had experience in animation and studio production. MacGregor, who has a software, product and marketing background and previously worked at BigCommerce, is Biteable’s chief product officer.

The team had initially been working on freelance projects for people who needed advertising and explainer videos, which led them to realize the opportunity in the video creation market. They believed there was demand for a video builder product that simplified a lot of the decisions that needed to be made when making a video. That is, they wanted to do for video creation what Squarespace, Wix and others have done for website creation.

Chudoba more recently joined the company as a result of Biteable wanting to bring in a CEO with more experience growing freemium software productivity businesses. Prior to Biteable, Chudoba worked in private equity, was an early SurveyMonkey employee (CRO), and also spent time at PicMonkey (COO), Thrive Global (COO and CFO) and Calendly (head of business operations).

While Chudoba admits Biteable is not without its competition, he views that as a positive thing. It means there’s opportunity in the market and it gives Biteable a chance to differentiate itself from others.

On that front, Biteable’s customers tell him the product offers a good balance between the amount of time and skill set they have and the quality of the results.

“They can produce results that they are very proud of and that exceed what they thought they could do with — not necessarily low effort — but without having the training, skills and design background,” says Chudoba.

Above: A Biteable explainer video built with Biteable.

The customers also appreciate the sizable content library, which includes a combination of stock photography, stock video footage and hundreds of animations and scenes. Biteable licenses content from Unsplash and Storyblocks, while its animation library and templates are built in-house by its own professional design team. This allows the company to release hundreds of scenes per month, to keep the library content refreshed and current.

Unlike some of the other products on the market, Biteable’s sweet spot isn’t on “quick hit” social videos, like Instagram Stories, for example. Instead, it focuses on assets that companies use and reuse — like video explainers for a business, online marketing and ads, videos that appear on product pages, and more. Its videos also tend to be between 30 seconds and three and half minutes.

Already, Biteable has found individuals from companies like Amazon, Microsoft, Google, Disney, Salesforce, BBC, Shopify and Samsung have used its service, though it doesn’t have any official contracts with these larger businesses.

Above: A Biteable recruiting video template.

A free plan for individual users offers access to the suite of tools for video creation, including the 1.8 million pictures, clips and animations within the Biteable library. However, free videos are watermarked with Biteable’s branding. A $19 per month plan for single users removes the watermark and allows you to add your own and offers HD 1080p resolution and other features, like commercial usage rights. Professionals pay $49 per month for shared editing and projects and use by unlimited team members and more. Custom pricing plans are also available.

Combined, Biteable’s free and paid users total over six million. They create around 100,000 unique videos per month, and that number had roughly doubled over the course of 2020. 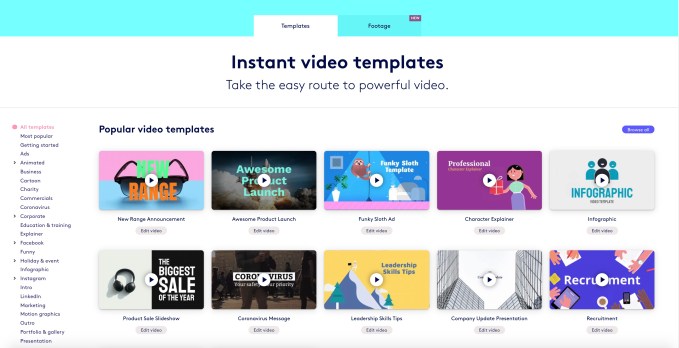 The new $7 million round, announced today, was led by new investor Cloud Apps Capital Partners. Existing investor Tank Stream Ventures also returned for the round and was joined by both new and existing angel investors. In total, Biteable has raised over $9 million to date.

With the additional funds, Biteable aims to hire and continue to develop the product.

Another shift attributed to the pandemic is that people have warmed up to remote work. Biteable had already been a remote-first operation whose team of 46 is geographically distributed across Australia, the U.S., Canada, and Western Europe. Now, Biteable no longer has to convince people that remote work is the future — and this helps with recruiting talent, too.

Chudoba believes Biteable can grow to become a larger company over time.

“Video is a platform concept and so I think you can build a really big standalone company,” Chudoba says. “We’re a freemium model so that’s a low customer acquisition cost. It’s a high-value service and it can be very sticky when you get teams involved,” he notes.

“The power of online video has been incredible, and the events of 2020 have accelerated adoption trends that would have otherwise taken five or more years to evolve,” notes Matt Holleran, general partner at Cloud Apps Capital Partners, in a statement about his firm’s investment. “As a firm, we look for great businesses in high-growth industries with excellent teams that we can help reach the next level. In Biteable, we see all three of those elements and are incredibly excited to partner with Brent and the Biteable team on this next chapter of growth,” he says.