The COVID-19 pandemic has led to a major upswing in virtual learning — where some schools have gone (and stayed) remote, and others have incorporated significantly stronger online components in order to help communities maintain more social distancing. That has in turn led to a surge in the usage of tools to help home learners do their work better, and today, one of them is announcing a growth round that speaks to the opportunity in that market.

Brainly, a startup from Poland that has built a popular network for students and their parents to engage with each other for advice and help with homework questions, has raised $80 million, a series D that it will be using both to continue building out the tools that it offers to students as well as to home in on expansion in some key emerging markets such as Indonesia and Brazil. The news comes on the heels of dramatic growth for the company, which has seen its user base grow from 150 million users in 2019 to 350 million today.

The funding is being led by previous backer Learn Capital, with past investors Prosus Ventures, Runa Capital, MantaRay and General Catalyst Partners also participating. The company has now raised some $150 million and while it’s not disclosing valuation, CEO and co-founder Michał Borkowski confirmed it is “definitely” an up round for the company. For more context, PitchBook estimates that the company was valued at $180 million in its last round, a Series C of $30 million in 2019.

Brainly, a crowdsourced homework helper for students, raises $30M to expand in the US

That C round was raised specifically to help Brainly grow in the U.S. It currently has some 30 million users in that market, and it happens to be the only one in which Brainly is monetising users. Everywhere else, Brainly is currently free to use. (In the U.S. there are also some formidable competitors, like Chegg, which has strong traction in the market of helping students with homework, with some 74% of Chegg’s user spend concentrated in that one single country.)

“Brainly has become one of the world’s largest learning communities, achieving significant organic growth in over 35 countries,” said Vinit Sukhija, partner at Learn Capital, in a statement. 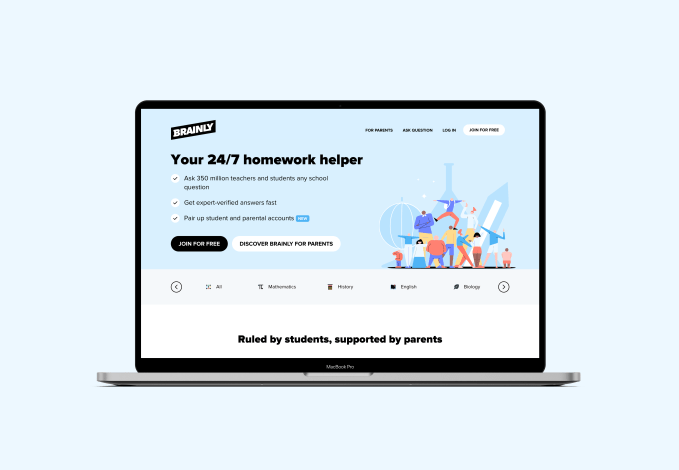 Even before the COVID-19 pandemic, Brainly was finding an audience with students — primarily those aged 13-19, said Borkowski — who were turning to the service to connect with people who could help them with homework when they found themselves at an impasse with, say, a math problem or getting to grips with the sequence of events that led to the revolutions of 1848. The platform is open-ended and is a little like a Quora for homework, in that people can find and answer questions they are interested in, as well as ask questions themselves.

That platform, however, took on a whole new dimension of importance with the shift to virtual learning, Borkowski said.

“In the western world, online education wasn’t a big investment area [pre-COVID] and that has changed a lot, with huge adoption by students, parents and teachers,” he said. “But that big transition, switching from offline to online, has left kids struggling because teachers have so much more to do, so they can’t engage in the same way.”

So with “homework” becoming “all work”, that has effectively led to needing more help than ever with home studies. And while many parents have tried to get more involved to make up the difference, “having parents as teachers has been hard,” he added. They may have been taught differently from how their kids are learning, or they don’t remember or know answers.

One thing that Brainly started to see, he said, was that with the pandemic more parents started using the app alongside students, either to work out answers together or to get the help themselves before helping their kids, with a number of these being from parents of kids younger than 13. He said that 15-20% of all new registrations currently are coming from parents.

Brainly up to now has been mainly focused on how to build out more tools for the students — and now parents — that use it, and has so far been about organic growth for those communities.

However, there is clearly scope to expand that to more educational stakeholders to better organise what kind of questions are answered and how. Borkowski said that the company has indeed been approached by educators, those building curriculums and others so that answers might tie in better with the kinds of questions that they are most likely to ask of students, although for now the company “wants to keep the focus on students and parents getting stuck.”

In terms of future products, Brainly is looking at ways of bringing more tutoring, video and AI into the mix. The AI aspect is very interesting and will in fact tie in to wider curriculum coverage based on more localised needs.

For example, if you ask for help with a particular kind of quadratic equation technique, you can then be served lots of same practice questions to help better learn and apply what you’ve just been learning, and you might even then get suggested related topics that will appear alongside that in a wider mathematics examination. And, you might be offered the chance to meet with a tutor for further help.

Tutoring, he said, is something that Brainly has already been quietly piloting and has run some 150,000 sessions to date. Having such a large user base, Borkowski said, helps the startup run services at scale while still effectively keeping them in test mode.

“It will be about looking at what students are studying and how to map that to the curriculum in the country, and what we can do to help with that.” Borkowski said. “But it will require a heavy lift and machine learning to pinpoint students” for it to work properly, which is one reason it has yet to roll it out more comprehensively, he added.

Tutoring and more personalization are not the only areas where Brainly is actively testing out new services.

The company is also creating more space for adding video to demonstrate different techniques (which I suspect is especially good for something like mathematics, but equally helpful for, say, an art technique). This is presumably in part based on a 2018 acquisition the startup made to bring on more video tools, which underscores in some ways how deliberate Brainly’s expansion strategy has been.

There are “thousands per week” being added already, but as with tutoring “that, for us, is a testing stage,” added Borkowski. There should be more coming in Q1 about new products, he said.