Last month, Bumble introduced a new feature that would prevent bad actors from using the dating app’s “unmatch” feature to hide from victims. Now Tinder has done something similar. The company announced on Friday it will soon roll out an update to its app that will make it easier for users to report someone who has used the unmatch feature in an effort to get away with their abuse. But in Tinder’s case, it’s only making it easier for users to learn how to report the violation, rather than giving the victims a button in the chat interface to report the abuse more directly.

Tinder notes that users have always been able to report anyone on the app at any time — even if the person had used the unmatch feature. But few users likely knew how to do so, as there weren’t obvious explanations in the app’s user interface about how to report a chat after it disappeared.

With the update, Tinder says it will soon add its “Safety Center” shield icon within the Match List, where the chats take place. This will direct users to the Safety Center in the app, where they can learn how to report users who aren’t displayed on the Match List because they used the unmatch feature. 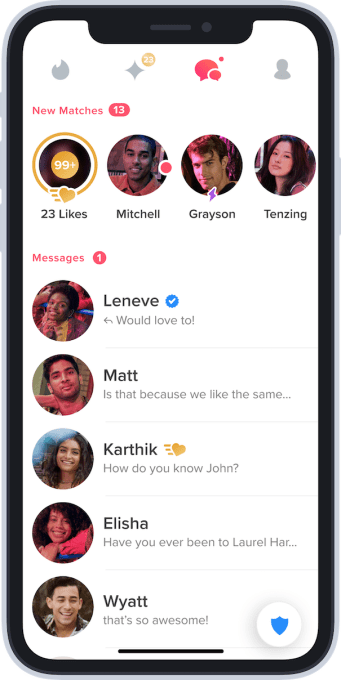 The updates to both Tinder and Bumble came about following an investigation by the Australian Broadcasting Corporation, which found that 48 out of 231 survey respondents who had used Tinder said they had reported other users for some kind of sexual offense. But only 11 of those reports had received any replies, and even fewer offered specific information about what was being done.

The story had also explained how bad actors would take advantage of the dating app’s “unmatch” feature to hide from their victims. After unmatching, their chat history would disappear from the victim’s phone, which would have allowed the user to more easily report the abuse to Tinder or even to law enforcement, if needed.

Though Tinder was the focus of the story, Bumble quickly followed up to say it was changing how unmatching on its app would work. Instead of having the chat disappear when unmatched, Bumble users are now shown a message that says the other person has ended the chat. Here, they’re given the option to also either delete the chat or report it.

The ability to report the chat directly from the messaging inbox is what makes Bumble’s solution more useful. Tinder, on the other hand, is just redirecting users to what’s essentially its help documentation — the Tinder Safety Center — to learn how to go about making such a report. The addition of this extra step could end up being a deterrent to making these reports, as it’s less straightforward than simply clicking a button that reads “Report.”

Tinder also didn’t address the other issues raised by the investigation, which said many reports lacked follow-up or clear information about what actions Tinder was taking to address the issues.

Instead, the company says that it will continue to acknowledge when reports are received to let the member making the report know an appropriate action will be taken. Tinder added it will also direct users to trained resources for crisis counseling and survivor support; remove accounts if it finds account holders have been reported for violent crimes; and will continue to work with law enforcement on investigations, when required. These actions, however, should be baseline features for any dating app, not points of pride.

Tinder stressed, too, that it would not remove the unmatch feature, which is necessary for safety and privacy of its members. That seems to miss the point of what users’ complaints were about. Tinder users were not angry or concerned that an unmatching feature existed in the first place, but that it was being used by bad actors to avoid repercussions for their abuse.

The company didn’t say precisely when the changes to the dating app would roll out, beyond the “coming weeks.”

Today, Tinder’s parent company also announced a partnership with RAINN, a large anti-sexual violence organization, to conduct “a comprehensive review of sexual misconduct reporting, moderation, and response across Match Group’s dating platforms” and “to work together to improve current safety systems and tools.”

The organization will review Tinder, Hinge and Plenty of Fish to determine what best practices should be. Match says the partnership begins today and will continue through 2021.

“Every person deserves safe and respectful experiences, and we want to do our part to create safer communities on our platforms and beyond,” said Tracey Breeden, head of Safety and Social Advocacy for Match Group, in a statement. “By working together with courageous, thought-leading organizations like RAINN, we will up level safety processes and strengthen our responses for survivors of sexual assault. Safety challenges touch every corner of society. We are committed to creating actionable solutions by working collaboratively with experts to innovate on meaningful, industry-led safety approaches,” she added.