Strong e-commerce sales are predicted to help lift overall holiday retail spending in the U.S., according to forecasts released today by the National Retail Federation (NRF) and eMarketer. Both firms expect to see overall retail sales growth during November and December, though the market may be impacted by slowing brick-and-mortar sales. 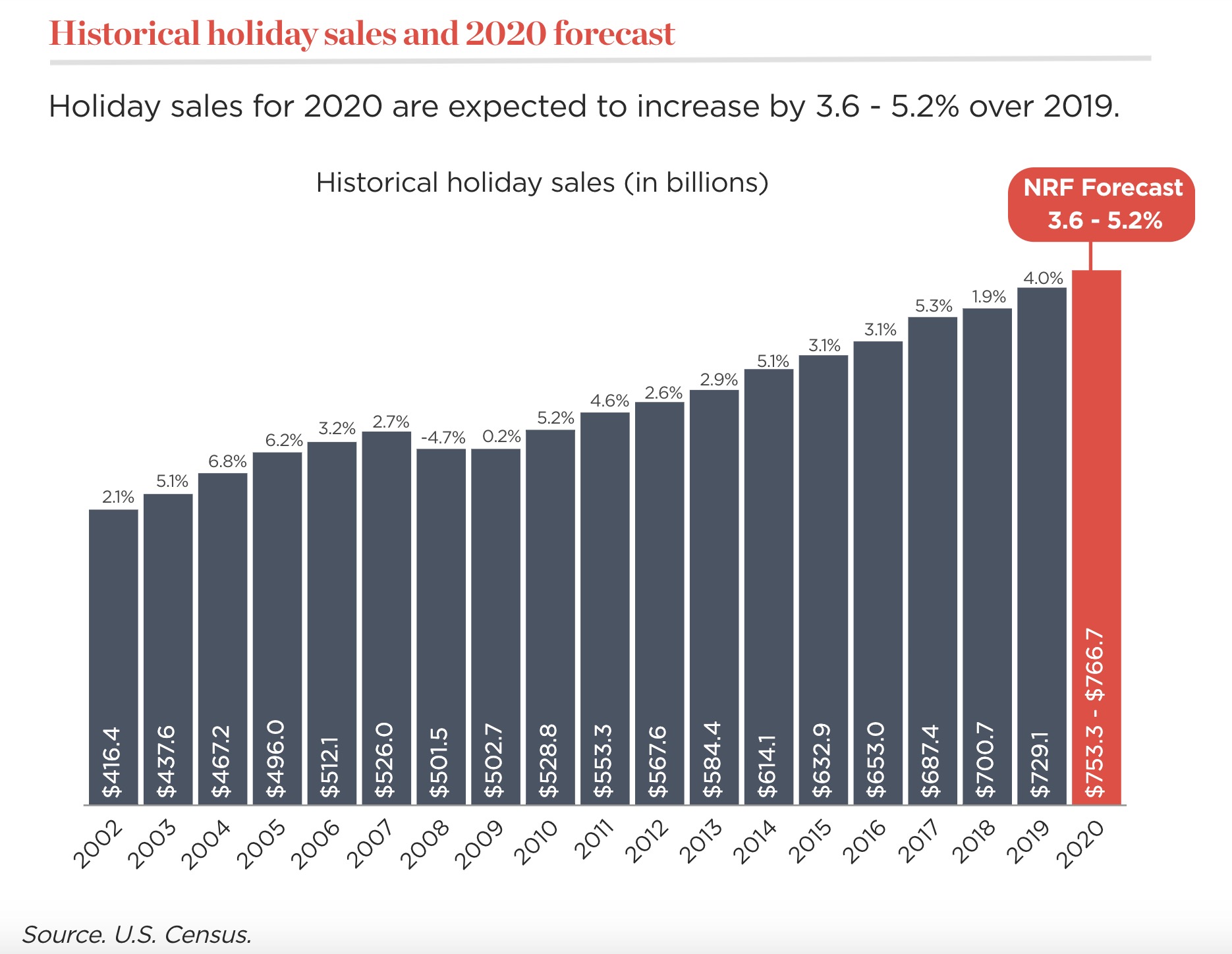 Growth will come from online and other non-store sales, which are included in the total, which will increase between 20% and 30% to reach between $202.5 billion and $218.4 billion. That’s up from $168.7 billion last year.

NRF’s takeaway is that consumers are willing to spend — perhaps because of the challenging year that 2020 has been, rather than despite it.

“After all they’ve been through, we think there’s going to be a psychological factor that they owe it to themselves and their families to have a better-than-normal holiday,” noted NRF Chief Economist Jack Kleinhenz. “There are risks to the economy if the virus continues to spread, but as long as consumers remain confident and upbeat, they will spend for the holiday season,” he added.

The firm also noted Americans may have reduced their spending in other categories, like personal services, travel and entertainment due to the pandemic, which could increase the money they have for retail spending.

EMarketer, on the other hand, paints a less rosy picture when it comes to overall sales.

The firm predicts that total holiday season retail sales will see the lowest growth rate at just 0.9% year-over-year. This growth will come from the e-commerce sector, which will see its highest growth rate — 35.8% — since the firm began tracking retail sales in 2008. Brick-and-mortar sales, on the other hand, will decline 4.7%. 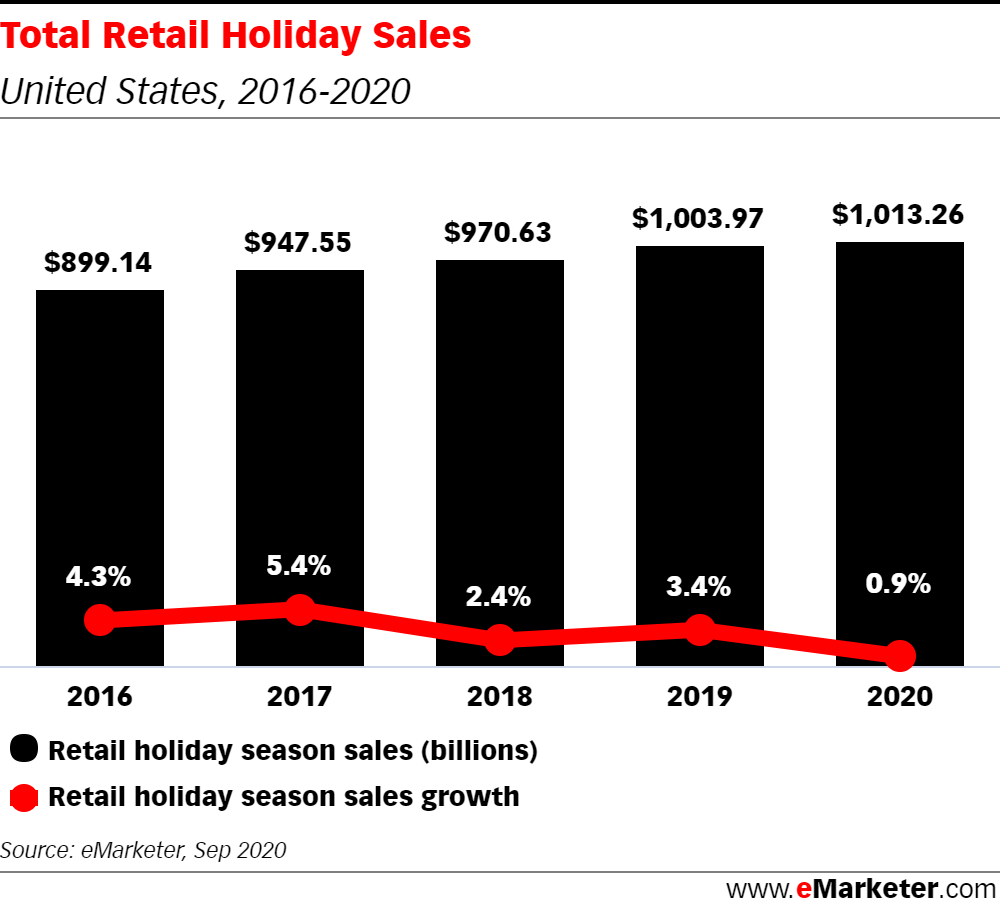 The discrepancy between these two firms’ estimates have to do with how they calculate “retail sales.”

EMarketer’s estimates include auto and gasoline sales, but exclude restaurants, travel and event sales. NRF’s figures, on the other hand, exclude auto, gasoline and restaurants.

However, both agree on an e-commerce surge. NRF notes online sales were already up 36.7% year-over-year in the third quarter — in part, due to early holiday shopping. This year, some 42% of consumers had started shopping earlier than usual, it recently found. Plus, retail sales were up 10.6% in October 2020 versus October 2019, in aggregate, its forecast noted. 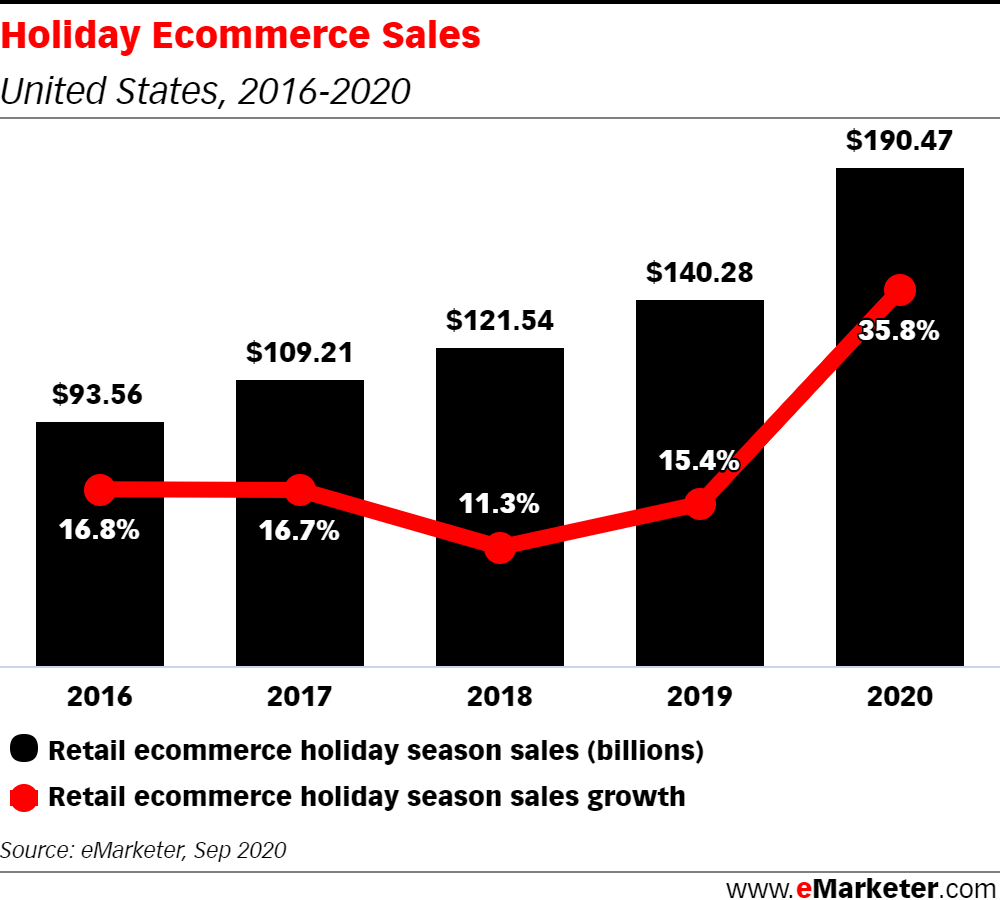 NRF also expects seasonal hiring to be in line with recent years, as retailers hire between 475,000 and 575,000 seasonal workers compared with 562,000 in 2019. Some of that hiring may have already taken place in October, due to early shopping, it said.

Though Black Friday may not see the same levels of in-person shopping as in years past, brick-and-mortar retailers have made it easier to shop digitally, then either have items shipped home, picked up in-store, or even curbside. Outside of Amazon, Walmart and Target have particularly benefited from investments in e-commerce, as both retailers easily beat Wall St. expectations in their latest earnings reports, released just ahead of the holiday quarter.

Online, however, Cyber Monday will continue to rule, however, eMarketer says. 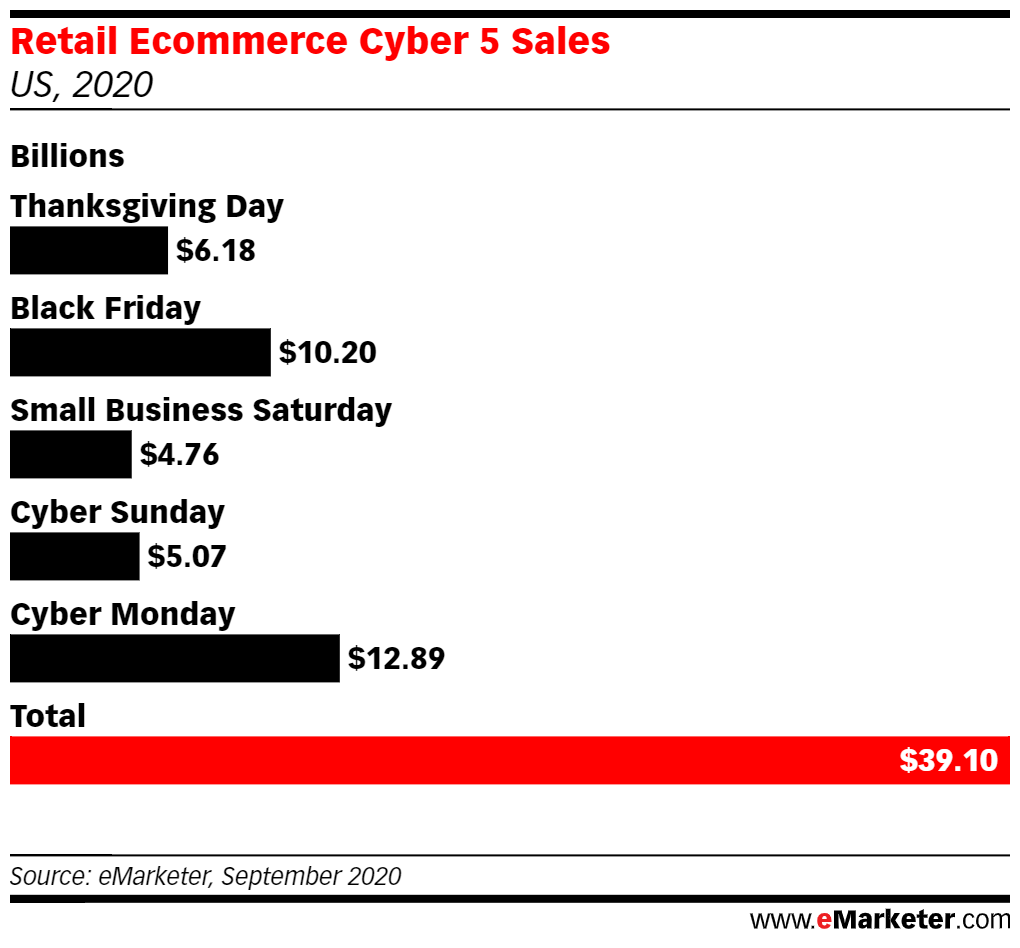 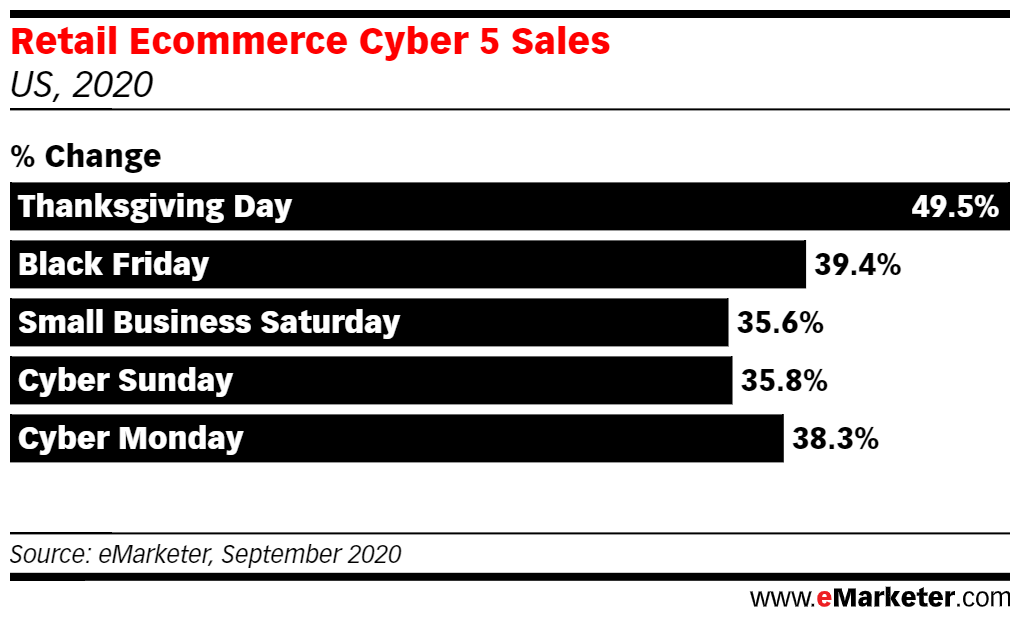 In a mobile forecast, analytics firm App Annie predicted Americans would spend over 110 million hours in shopping apps on Android devices during the two-week period consisting of Black Friday and Cyber Monday weeks. It noted the pandemic had already accelerated mobile device usage to 4 hours, 20 minutes per day, and Americans spent over 61 million hours shopping during the week of Prime Day.