Lime is launching its fourth-generation scooter in Paris this week, an example the company says of its financial turnaround and commitment to growth. But the product rollout isn’t over.

Lime CEO Wayne Ting hinted Thursday during the WSJ Future of Everything event that a “third mode,” beyond bikes and scooters, is also in the works for the first quarter of 2021, as well as the addition of third-party companies to its platform. Earlier this year, Lime started to include on its app Wheels-branded electric bikes in certain cities. Ting said users should expect more partnerships like these.

Ting wouldn’t give specifics on this “third mode” except to explain that it will probably serve a slightly longer distance than its scooters and be better at carrying cargo.

“We want to make sure that it continues to appeal to different demographics that maybe don’t see themselves on a scooter,” Ting added.

For now, Lime is focused on deploying the Gen4, a model that Ting says will surpass the more than two-year lifespan of its previous generation. The Gen4 will roll out across Europe in early 2021. Much of the Gen4 work was done by engineers at Uber’s Jump micromobility unit. Uber offloaded Jump to Lime this spring as part of a complex $170 million fundraising round.

Lime gave some credit to the Jump employees in a blog post Thursday and thanked them for their “work in the initial development of this new model.” Lime said its R&D team added to the design to bring it to market and will iterate further on the Gen4 over time. Lime focused on improving the Jump scooter’s durability and swapped out some parts that would allow the company to reuse parts from existing Lime vehicles.

The Gen4 features swept-back handlebars that are similar to the design of bike handles, which Lime says allows for a more comfortable grip. The new model also sports an enhanced suspension and larger wheels, a dual hand-brake system, a lower baseboard to optimize the center of gravity on the scooter and a new kickstand with two legs.

Perhaps the biggest change is the addition of a swappable battery, which Ting described as a “huge improvement on existing technology.” These swappable batteries will be interchangeable with the Lime bike fleet, further streamlining its operations, the company said Thursday. 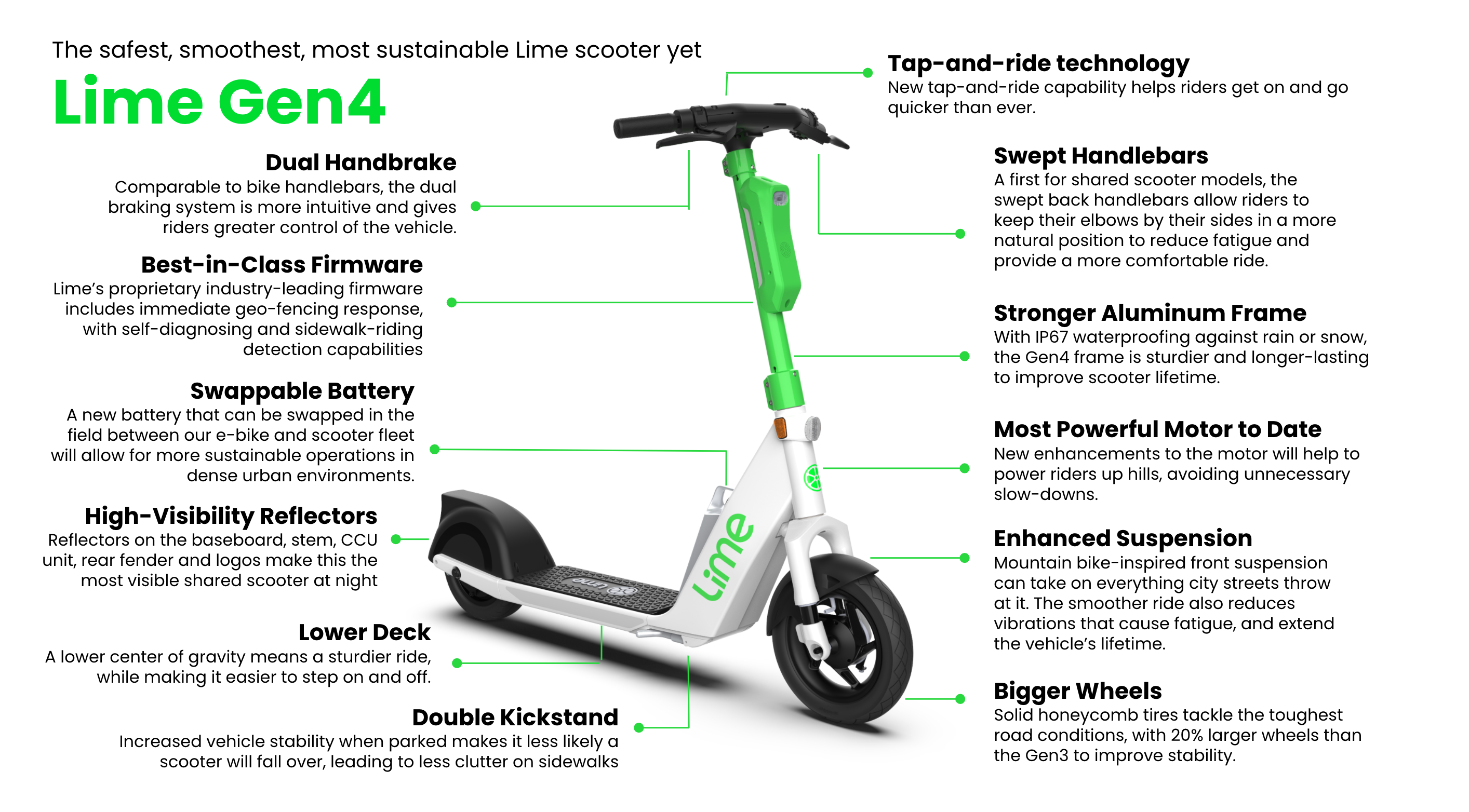 Lime said Thursday it was both operating cash flow positive and free cash flow positive in the third quarter — a first — and is on pace to be full-year profitable, excluding certain costs (EBIT), in 2021. That turnaround will allow the company to continue to invest in product development and expand its footprint, according to Ting.

Lime touts a 2020 turnaround and 2021 profitability