Statespace, the training platform for gamers, has today announced the close of a $29 million Series B financing led by Khosla Ventures. This comes just six months after the announcement of a $15 million Series A funding, also led by Khosla, with participation from FirstMark.

Statespace launched out of stealth in 2017 with a product called Aim Lab. Aim Lab runs on Steam and replicates the physics of popular video games to give users a training environment to practice their aim. Moreover, Aim Lab (which was developed by neuroscientists) measures visual acuity and lets users know their strengths and weaknesses. 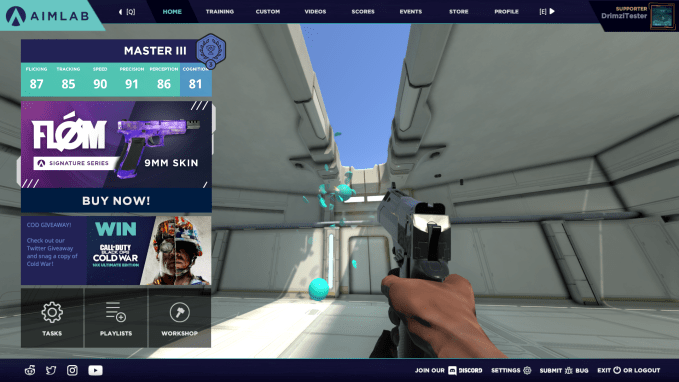 The company also has plans to launch a product called The Academy, which lets users pay for courses that are taught by top streamers and players. These players include KingGeorge (Rainbox Six Siege), SypherPK (Fortnite), Valkia (Overwatch), Drift0r (CoD) and Launders (CS:GO).

The tech behind Aim Lab can be applied to a number of use cases in the gaming world. For one, pro esports organizations don’t necessarily have the breadth of data they want to make decisions on roster formation, recruiting, etc. Statespace partnered with the Pro Football Hall of Fame to develop a “Cognitive Combine,” giving players an overall score based on a wide range of skills outside of any specific game.

There are also medical applications for the tech. The company has applied for a grant alongside several universities to work on a commercial application for stroke rehabilitation, and believes that its tech can be used to help with cerebral palsy rehabilitation.

Statespace has also grown its team to more than 40 people, and interestingly around one quarter of those people do not have a college degree.

“Internally, we talk about being like the island of misfit toys as a company,” said Mackey. “Give us all the underdogs and weirdos and people that traditionally wouldn’t have this type of career or a shot and let’s put them all together and win.”

Mackey explained that growth is the number-one priority of the company, which has yet to determine a primary revenue channel. Statespace is currently partnering with teams and big streamers to develop skins that are for sale, but Aim Lab is free to use.