Right now, TousAntiCovid appears to be a rebranding more than a pivot. There’s a new name and some changes in the user interface. But the core feature of the app remains unchanged.

StopCovid hasn’t been a success. First, it’s still unclear whether contact-tracing apps are a useful tool to alert people who have been interacting with someone who has been diagnosed COVID-19-positive. Second, even when you take that into consideration, the app never really took off.

Back in June, the French government gave us an update on StopCovid three weeks after its launch: 1.9 million people had downloaded the app, but StopCovid only sent 14 notifications.

French contact-tracing app StopCovid has been activated 1.8 million times but only sent 14 notifications

Four months later, StopCovid/TousAntiCovid has been downloaded and activated by close to 2.8 million people. But only 13,651 people declared themselves as COVID-19-positive in the app, which led to 823 notifications. Even if you’re tested positive, in most cases, no one is going to be notified.

Hence today’s update. If you’ve been using the app, you’ll receive TousAntiCovid with a software update — the French government is using the same App Store and Play Store listing. When you first launch the app, you go through an onboarding process focused on contact-tracing — activate notifications, activate Bluetooth, etc.

France is using its own contact-tracing protocol called ROBERT. A group of researchers and private companies have worked on a centralized architecture. The server assigns you a permanent ID (a pseudonym) and sends to your phone a list of ephemeral IDs derived from that permanent ID. 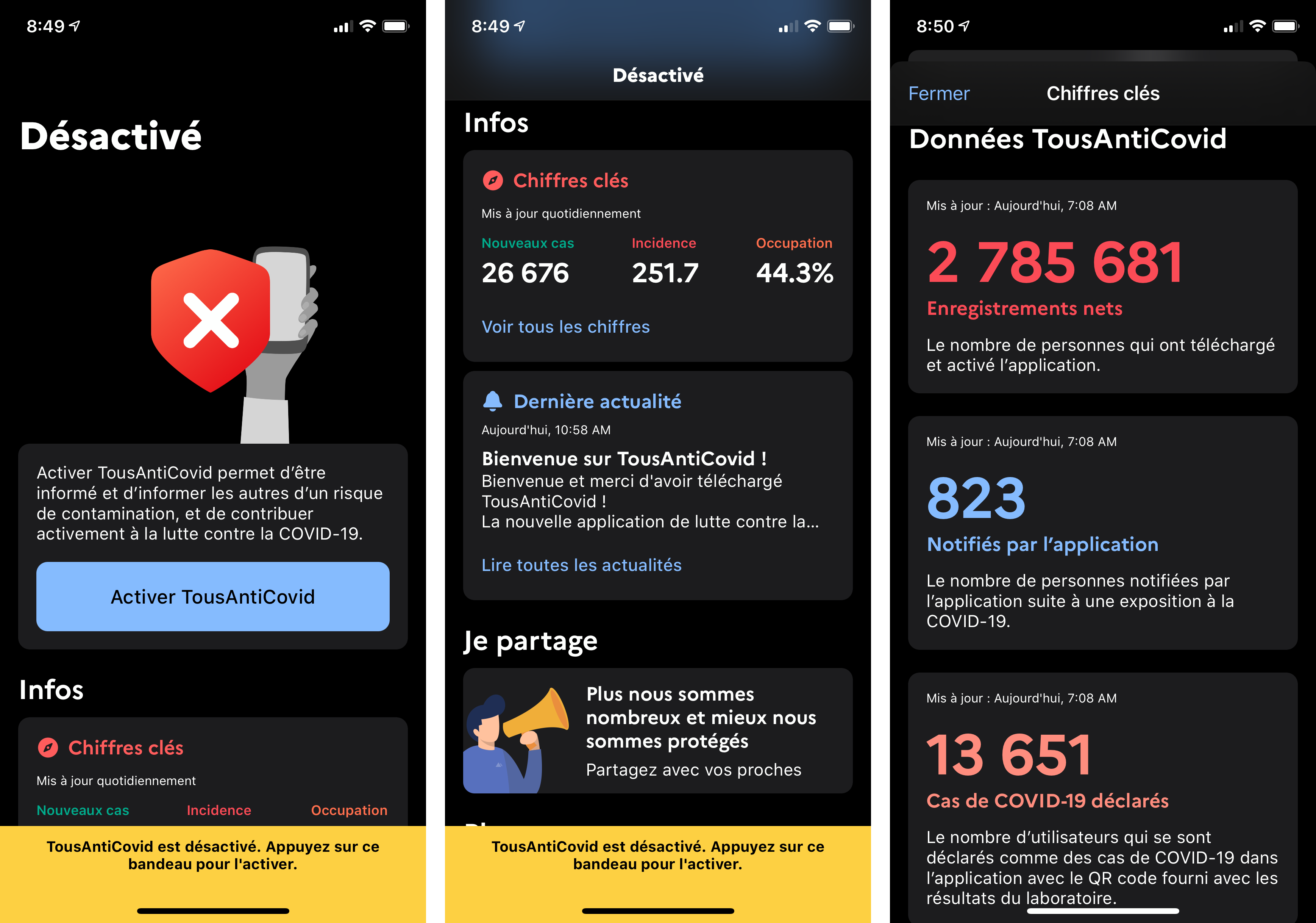 Like most contact-tracing apps, TousAntiCovid relies on Bluetooth Low Energy to build a comprehensive list of other app users you’ve interacted with for more than a few minutes. If you’re using the app, it collects the ephemeral IDs of other app users around you.

If you’re using the app and you’re diagnosed COVID-19-positive, your testing facility will hand you a QR code or a string of letters and numbers. You can choose to open the app and enter that code to share the list of ephemeral IDs of people you’ve interacted with over the past two weeks.

But there are some new things in the app. You can now access some recent numbers about the pandemic in France — new cases over the past 24 hours, number of people in intensive care units, etc. There’s also a new feed of news items. Right now, it sums up what you can do and cannot do in France.

And there are some new links for useful resources — the service that tells you where you can get tested and a link to the exemption certificate during the curfew. When you tap on those links, it simply launches your web browser to official websites.

Let’s see how the app evolves as the government now wants to actively iterate on TousAntiCovid to make it more attractive. If TousAntiCovid can become a central information hub for your phone, it could attract more downloads.