Google’s strategy around its messaging apps is nothing if not messy right now (hello Hangouts, Meet, Chat, Duo and Co.), but it looks like things will get a bit easier come next year. We already knew that Hangouts’ time was coming to an end and as Google announced today, the company will allow all current Hangouts users to migrate to Chat — which was originally meant to only be its Slack-like messaging service for business users — in the first half of 2021.

One interesting wrinkle here: Chat will now also become free to use for consumers. Currently, you have to be a paying G Suite/Workspace user to access the service (though somehow it’s enabled on my free personal account).

While Chat isn’t an exact 1-to-1 replacement of Hangouts, it actually offers a bunch of additional features for group chats and collaboration around files and tasks, as well as new security tools. Chat, together with Rooms and Meet, will also be integrated deeply into the Gmail app as part of Google’s Workspace migration. 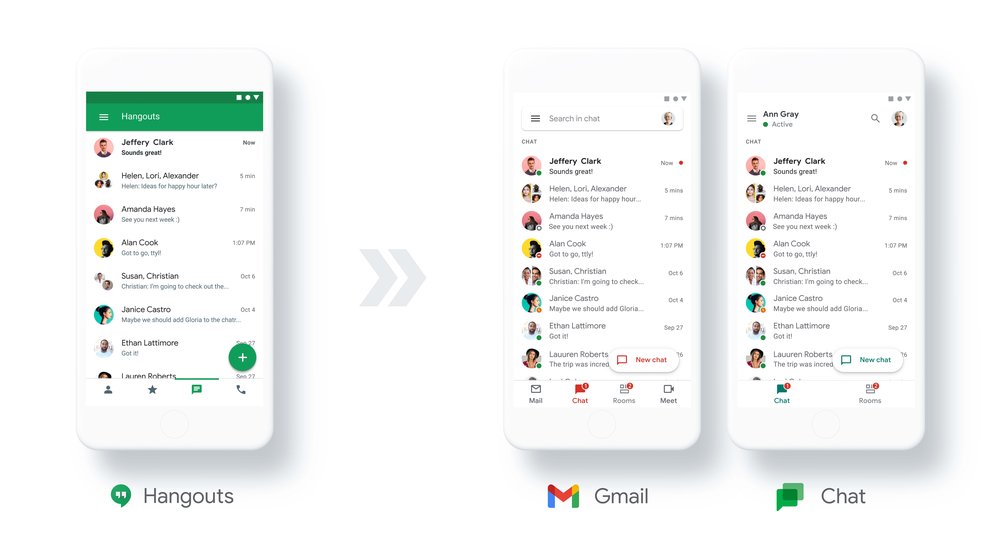 Google says it will automatically migrate all Hangouts conversations, contacts and history to Chat, but it’s not providing details about this yet. Final timing, Google says, may still shift. It’s not clear, though, when Google will force everyone to migrate and shut down the Hangouts servers for good.

There are a few more details here: If you use Hangouts with Google Fi, Hangouts support will go away “early next year.” Traditionally, Fi users were able to make calls and manage their text messages from Hangouts. That experience will migrate to Google’s Messages app.

If you’re a Google Voice user, there’s a similar transition happening. For voice calls and text messages, Hangouts users will now be directed to the Voice app, and early next year, your Voice support will be removed from Hangouts.

And for all users in the U.S. and Europe, the ability to call phones from Hangouts will disappear at the beginning of next year — and group video calls in Hangouts will transition to Meet in November.

Yeah — that all sounds complicated, but it’s a problem of Google’s own making. A few years ago, the idea was to move Hangouts users to its Allo and Duo apps and business users to Chat and Meet (or whatever they were called back then). Allo flopped (and few people use Duo), leaving Google with the unenviable task of keeping the aging Hangouts platform around for the foreseeable future and making the overall transition harder and more complicated, to the point where I’m not sure that consumers really understand what’s happening.

Classic Hangouts will hang in there a bit longer