Facebook announced today it will begin rolling out new functionality that will allow Instagram and Messenger users to communicate across apps, in addition to bringing a host of Messenger-inspired features to the Instagram inbox. On Instagram, users will be presented with an option to update to a new messaging experience that offers the ability to change your chat color, react with any emoji, watch videos together, set messages to disappear and more. As a part of this update, they’ll also have the option to chat with friends who use Facebook, the app will inform them. 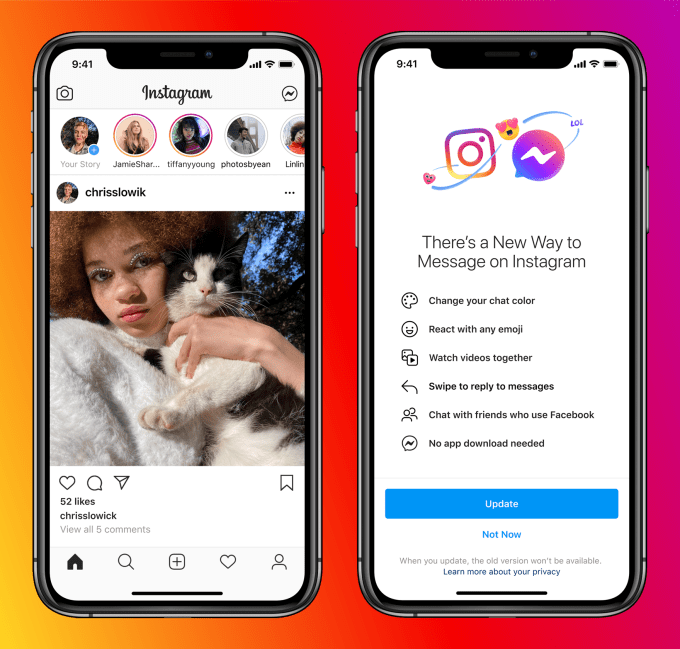 The broad set of more “fun” additions to the Instagram inbox will serve as a way to entice users to agree to the upgrade. This decision, in turn, locks users further inside the Facebook universe. With cross-platform messaging interoperability, users may see fewer reasons to try a different chat app as one messaging app can reach friends and family across two of the world’s largest social networks.

In time, Facebook plans to fold WhatsApp into the experience, too, in a further consolidation of its market power.

Though many users may choose to update for the fun enhancements, Facebook notes they can then opt out of being reachable across platforms using new privacy controls, after the fact.

Through an expanded set of privacy tools, users can specify who can reach their main Chats list, who is sent to the Message Request folder and who can’t reach them at all. If an Instagram user doesn’t want to hear from anyone on Facebook, they can turn this feature off. 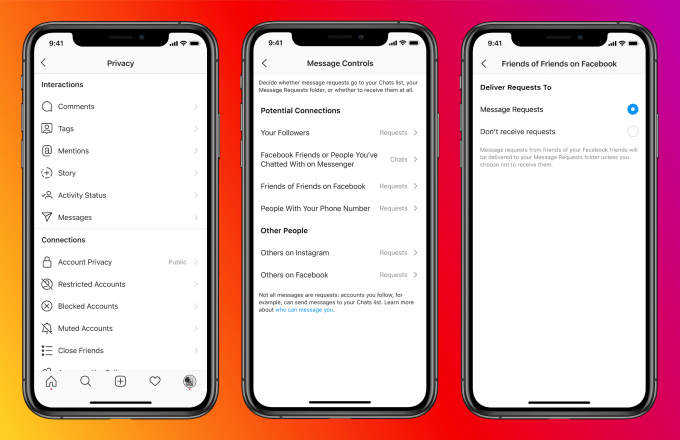 These controls can also be managed in the new Accounts Center, which Facebook launched yesterday. The tool allows users to manage a growing set of cross-app features, like Single Sign On and Facebook Pay.

As before, users on both Instagram and Messenger apps will be able to block and report suspicious and unwanted messages and calls on an as-needed basis. But blocking and reporting will be expanded to allow users to report full conversations in addition to single messages on Instagram. The “Safety Notices” feature in Messenger, which helps users spot and respond to suspicious activity, will also come to Instagram — initially to minors’ accounts.

Even if you agree to being reachable across platforms, Facebook clarifies that it’s not actually merging your inboxes.

In other words, you won’t see all your Instagram chats in Messenger or vice versa. Instagram users’ messages and calls from friends and family will remain in the Instagram app, but these may now include messages initiated by a Facebook user, if permitted.

If these changes seem a bit confusing, that could be by design. Facebook and Instagram users have to navigate a labyrinth of privacy and security settings that grow more complicated every year as the functionality offered by Facebook’s networks also expands. Though Facebook offers a range of nuanced controls, many users no longer bother to try to figure them out, as they’re constantly changing, relocated or made more complex.

Consumers may only view the messaging interoperability as a handy way to reach their friends on other services. But for industry observers, it’s another example of how Facebook appears to be leveraging its market dominance to possibly stifle new competition. For a company already under multiple antitrust investigations, it’s a move that seems to thumb its nose at government regulators.

The project to make Facebook’s chat platforms interoperate has been a significant technical undertaking from an infrastructure perspective. Last year, Facebook CEO Mark Zuckerberg detailed the company’s plans for messaging interoperability as part of his larger vision for a more private social networking experience.

Earlier this summer, Facebook began testing the changes with a small percentage of users.

In terms of the larger update beyond interoperability, Instagram users will also be able to watch videos together, including those from Facebook Watch and soon Reels.

They’ll also be able to make their messages disappear, like Snapchat, with a “Vanish Mode” option. Other new features include Boomerang-like “Selfie Stickers,” the ability to personalize the chat’s colors, use custom emoji reactions, forward messages with up to five friends or groups, reply directly to a specific message in a group chat for clarity’s sake and add visual flair to messages with animated effects.

Facebook says the features will begin rolling out to the general public, initially with a handful of countries around the world before expanding globally.