Twitter’s experiment to get people to actually read the content they’re sharing is going so well the company plans to expand it to the platform at large “very soon.”

In June, Twitter introduced a test feature on Android to promote “informed discussion” on the platform — something social media’s staccato conversational bursts are rarely conducive to.

The experimental prompt appeared for users who went to retweet an article they hadn’t clicked to open, and suggested they read before they retweet. 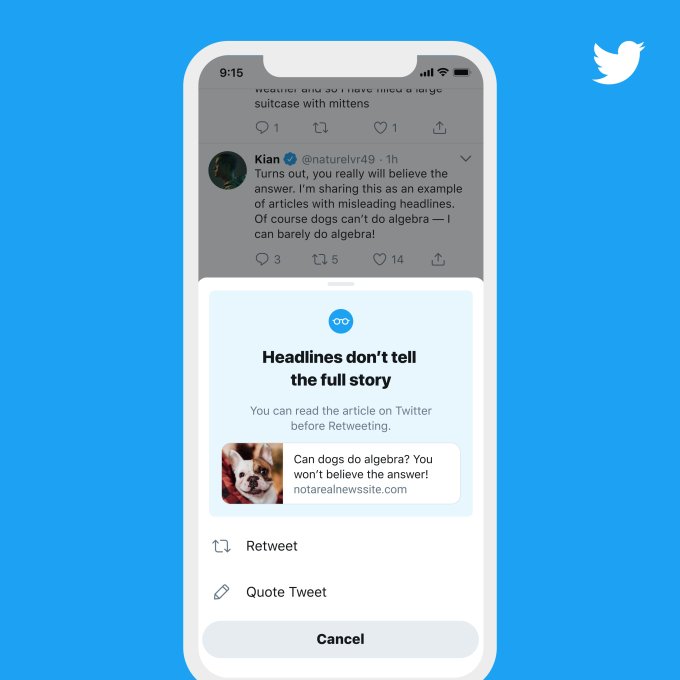 “It’s easy for articles to go viral on Twitter. At times, this can be great for sharing information, but can also be detrimental for discourse, especially if people haven’t read what they’re Tweeting,” Twitter Director of Product Management Suzanne Xie said.

📰 More reading – people open articles 40% more often after seeing the prompt
📰 More informed Tweeting – people opening articles before RTing increased by 33%
📰 Some people didn’t end up RTing after opening the article – which is fine! Some Tweets are
best left in drafts 😏

After building platforms tuned to get users sharing and engaging as much as possible, introducing friction to that experience seems counterintuitive. But inspiring even just a moment of pause in user behavior might address a number of deeply entrenched social media woes.

Ridding platforms of their problems won’t be easy, particularly for companies that are seldom motivated to make meaningful changes. But reprogramming user behavior away from impulsivity could help undermine the virality of misinformation, harassment, hyper-polarization and other systemic issues that we’re now seeing seep across the thin barrier between online and offline life.