Book clubs can be magical. Bring together a group of friends, tear apart a book and all of a sudden the words have a second, paperless, life.

But what if the author could join in the banter? Imagine riffing with Roxane Gay, debating with Ta-Nehisi Coates and eavesdropping on Jhumpa Lahiri. The experience would resemble that of an epilogue, but one reserved exclusively for your friend group.

For those intrigued, a new Salt Lake City startup wants to talk. BookClub launched today to bring author-led book clubs to readers. The platform will allow authors to join personal book groups, share exclusive video-based interviews and engage in questions you might have (including cliffhanger complaints).

The startup is founded by some familiar names: Degreed co-founders David Blake and Eric Sharp, as well as early product leader at Degreed, Emily Campbell.

“When you think of Instagram Stories and TikTok, the mainstream social media movement is mostly video-based,” Blake said. “But the book world has not yet caught up. If you think of Goodreads, it’s kind of like the internet, circa 2010.” BookClub, he hopes, will lead to more modern experiences with authors that are, at the same time, easily scalable.

To better picture the experience, see how BookClub produced a video based on the novel “The Suspect,” by Kent Alexander and Kevin Salwen.

Readers can also request an author to join their club. 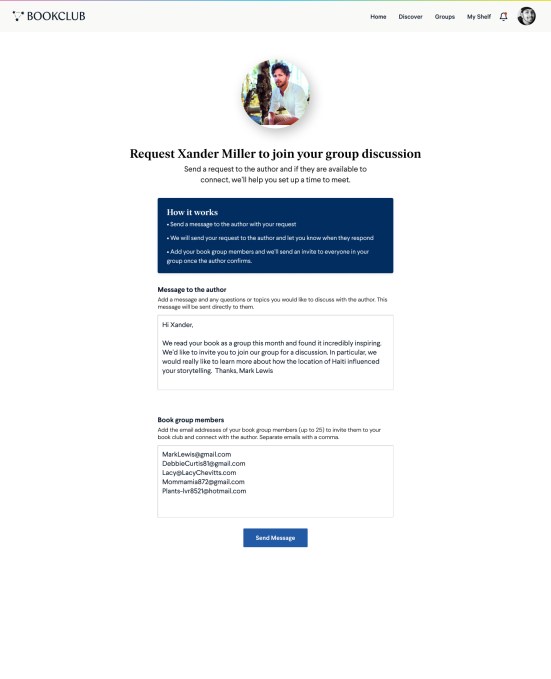 BookClub is taking a MasterClass approach to education and entertainment. MasterClass, which raised $100 million in May, sells celebrity-taught classes with a big focus on production. For a subscription fee, MasterClass users can learn how to cook from Gordon Ramsay or how to play tennis from Serena Williams.

Blake wants to offer a similar experience, but with authors.

“MasterClass has authors already on their platform, but they are all 100% teaching the skill of how to be a good writer,” Blake said. “Our platform is being built from the ground up, exclusively for this use case — and will be feature rich with things that can help tag, explore, discuss by characters, themes, questions.”

He did not share any big author names that BookClub has secured just yet, although those partnerships will be vital to BookClub’s success.

Blake declined to share specific details on pricing, but said that it will be a consumer subscription business with shared economic benefits for authors and moderators.

Although the product is pre-launch, Blake is clear about what BookClub is not.

“Rather than doing what’s easiest or most accessible, we’re trying to step back and say ‘what will it take to unlock the power of a great book?’ ” he said. “We’re giving [the book] the justice it deserves, rather than being Zoom for authors.”

One benefit of going with Zoom is that it is already a household name and millions of people have downloaded the client. BookClub will live as a media platform, not a downloaded client, and is going mobile-first. The decision to go mobile before desktop was driven by the fact that most people don’t want to hold a laptop during their book clubs. Instead, BookClub wants to recreate a FaceTime-like experience with an author.

It has been a busy pandemic for the co-founders of Degreed, which raised over $32 million in June. In April, the duo founded Learn In, a venture that plugs into company HR software to help decisionmakers manage sabbaticals for their employees. The startup raised $3.5 million from Album, GSV and Firework Ventures. BookClub will be their third company in the edtech space, and second startup launched within five months.

When asked how he’s handling juggling all of the startups, Blake simply said that he was “travelling 200 days a year, and got all that time back.” He added that he is now only at Degreed at an operational capacity, so will be evenly splitting his time between Learn In and BookClub. Still, leading two startups at the same time is a challenge, since most people can’t even handle one.

BookClub tells TechCrunch that it successfully secured funding. The startup has raised $6 million in a seed round led by Maveron. Other investors include Signal Peak Ventures, Pelion Venture Partners, Mike Levinthal and GSV (a firm that has invested in all three of Blake’s ventures).

The money will be used for video production costs.

“Unless the author has been on Oprah’s book club, this will be the highest video treatment that an author will have ever received,” he said. “We’re trying to do Hollywood cinematic levels.”

Edtech investors are panning for gold