Last year, Amazon announced its Sidewalk network, a new low-bandwidth, long-distance wireless protocol it developed to help connect smart devices inside and — maybe even more importantly — outside of your home. Sidewalk, which is somewhat akin to a mesh network that, with the right amount of access points, could easily cover a whole neighborhood, is now getting closer to launch.

As Amazon announced today, compatible Echo devices will become Bluetooth bridges for the Sidewalk network later this year, and select Ring Floodlight and Spotlight Cams will also be part of the network. Because these are low-bandwidth connections, Amazon expects that users won’t mind sharing a small fraction of their bandwidth with their neighbors.

In addition, the company also announced that Tile will be the first third-party Sidewalk device to use the network when it launches its compatible tracker in the near future.

When Amazon first announced Sidewalk, it didn’t quite detail how the network would work. That’s also changing today, as the company published a whitepaper about how it will ensure privacy and security on this shared network. To talk about all of that — and Amazon’s overall vision for Sidewalk — I sat down with the general manager of Sidewalk, Manolo Arana. 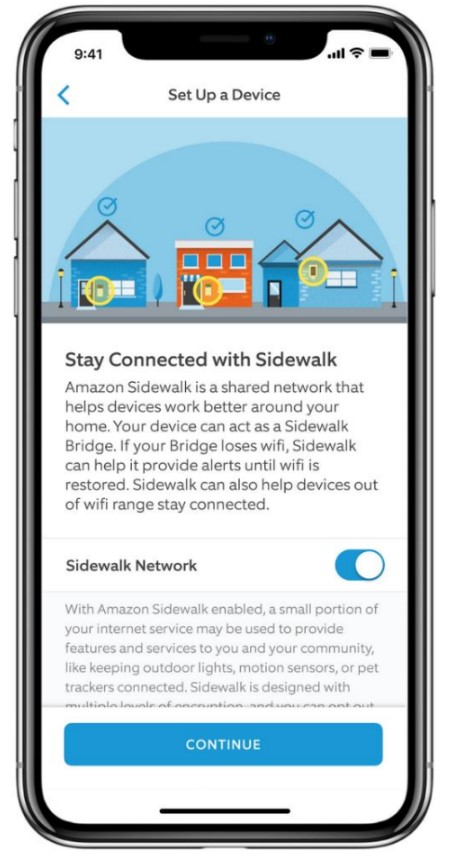 Arana stressed that we shouldn’t look at Sidewalk as a competitor to Thread or other mesh networking protocols. “I want to make sure that you see that Sidewalk is actually not competing with Thread or any of the other mesh networks available,” he said. “And indeed, when you think about applications like ZigBee and Z-Wave, you can connect to Sidewalk the same way.” He noted that the team isn’t trying to replace existing protocols but just wants to create another transport mechanism — and a way to manage the radios that connect the devices.

And to kickstart the network and create enough of a presence to allow homeowners to connect their smart lights at the edge of their properties, for example, what better way for Amazon than to use the Echo family of devices.

“Echos are going to serve as bridges, that’s going to be a big thing for us,” Arana said. “You can imagine the number of customers that will benefit from that feature. And for us to be able to have that kind of service, that’s super important. And Tile is going to be the first edge device, the first Sidewalk-enabled device, and they’ll be able to track your valuables, your wallet, whatever it is that you love.”

And in many ways, that’s the promise of Sidewalk. You share a bit of bandwidth with your neighbors and in return, you get the ability to connect to a smart light in your garden that would otherwise be outside of your own network, for example, or get motion sensor alerts even when your home Wi-Fi is out, or to track your lost dog who is wearing a smart pet finder (something Amazon showed off when it first announced Sidewalk). 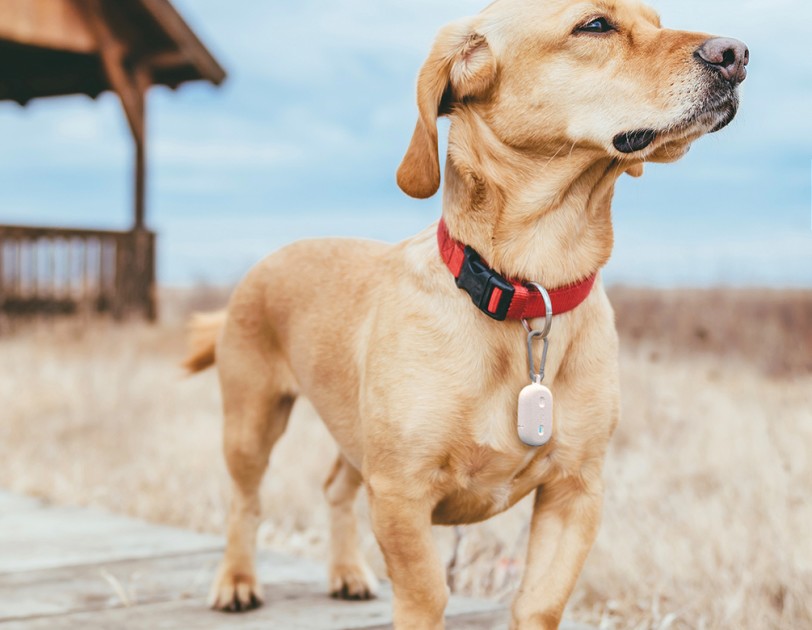 In today’s whitepaper, the team notes that Amazon will make sure that shared bandwidth is capped and provide a simple on/off control for compatible devices to give users the choice to participate. The maximum bandwidth a device can use is capped at 500MB and the bandwidth between a bridge and the Sidewalk server in the cloud won’t exceed 80Kbps.

The overall architecture of the Sidewalk service is pretty straightforward. The endpoint, say a connected garden light, talks to the bridge (or gateway, as Amazon also calls it in its documentation). Those gateways will use Bluetooth Low Energy (BLE), Frequency Shift Keying (FSK) and LoRa in the 900 MHz band to connect to the devices on one side — and then talk to the Sidewalk Network server in the cloud on the other.

That network server — which is operated by Amazon — manages incoming packets and ensures that they come from authorized devices and services. The server then talks to the application server, which is either operated by Amazon or a third-party vendor. 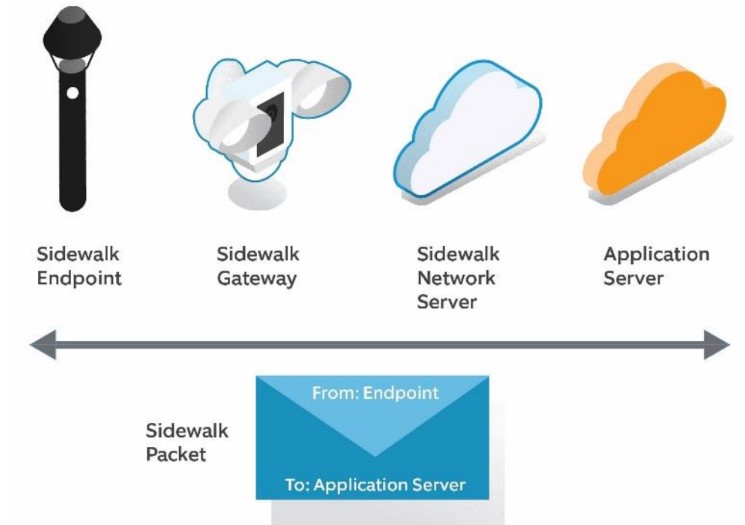 All these communications are encrypted multiple times, and even Amazon won’t be able to know the commands or messages that are being passed through the network. There are three layers of encryption here. First, there’s the application layer that enables the communication between the application server and the endpoint. Then, there’s Sidewalk’s network layer, which protects the packets over the air. In addition, there’s the so-called Flex layer, which is added by the gateway and which provides the network server with what Amazon calls “a trusted reference of message-received time and adds an additional layer of packet confidentiality.”

In addition, whatever routing information Amazon receives is purged every 24 hours and device IDs are regularly rotated to ensure data can’t be tied to individual customers, in addition to using one-way hashing keys and other cryptographic techniques.

Arana stressed that the team decided not to go public with this project until it had gone through extensive penetration tests, for example, and added kill switches and advanced security features. The team also developed novel techniques to provision devices inside the network securely. 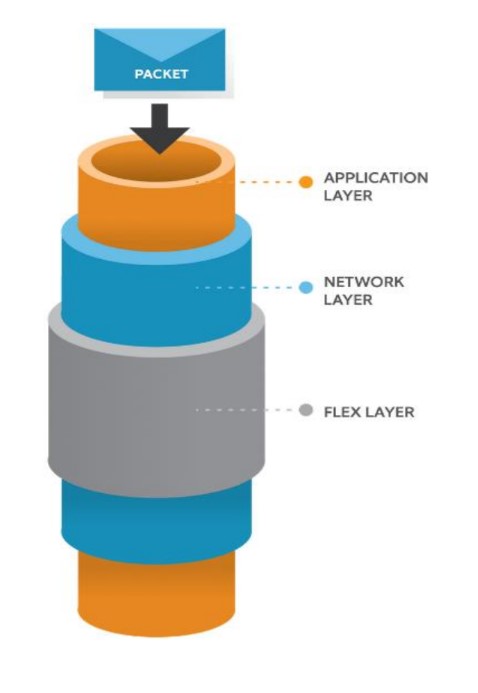 He also noted that the silicon vendors who want to enable their products for Sidewalk have to go through an extensive testing procedure.

“When you look at the level of security requirements for the silicon to be part of Sidewalk, many of our silicon [vendors] haven’t been qualified, just because it needs to be the new version, it needs to have certain secure boot features and things. That has been quite an eye-opener for everyone, to see that IoT is definitely improving — and it is going to get to a super level — but there’s a lot of work to do and this is part of it. We took it on and embraced that security level to the maximum and the vendors have been extremely positive and forthcoming working with us.”

Among those vendors the team has been working with are Silicon Labs, Texas Instruments, Semtech and Nordic Semiconductor.

To test Sidewalk, Amazon partnered with the Red Cross to run a proof of concept implementation to help it track blood collection supplies between its distribution centers and donation sites.

“What we do with this is very simple tracking,” Arana said. “If you think about what they need, it is: did [the supplies] leave the building? Did they arrive at the other building? And it’s just an immense simplification for them in terms of the logistics and creates efficiencies in terms of the distribution of those [supplies].”

This is obviously not so much a consumer use case, but it does show the potential for Sidewalk to also take on more industrial use cases over time. As of now, that’s not necessarily what the team is focusing on, but Arana noted that there are a lot of use cases where Sidewalk may be able to replace cell networks to provide IoT connectivity for sensors and other small edge devices that don’t have large bandwidth requirements — and adding cellular connectivity also makes these devices more expensive to build.

Because Amazon is jumpstarting the network with its Echo and Ring Devices, chances are you’ll hear quite a bit more about Sidewalk in the near future.