Everything we do seems to have an associated app these days, and all day they vie for your attention, pinging and lighting up in their needy ways. TouchWood wants to tone down this exhausting non-stop competition with a quiet, simplified interface built right into the natural material of your desk or wall.

Co-founders Matthew Dworman and Gaurav Asthana were fed up with the idea that making your home or workplace smarter usually meant adding even more stuff: a smart speaker that sits on your desk, a smart watch constantly telling you your step count, a smart fridge that slips advertisements into your morning routine. Not only that but these devices and apps are constantly drawing you away from what you want to do, whether that’s work or trying not to work.

They wanted (they told me) something like the enchanted sword Sting from Lord of the Rings: It’s just a sword 99 percent of the time, but it’s also an orc radar if and when you need it, and even then it just glows. Why doesn’t the digital world similarly only appear when you need it, and in the least obtrusive fashion possible?

Dworman previously worked in high-end furniture design, and with Asthana developed the idea of interacting with tech via “a slab of wood instead of an app,” as the latter put it. 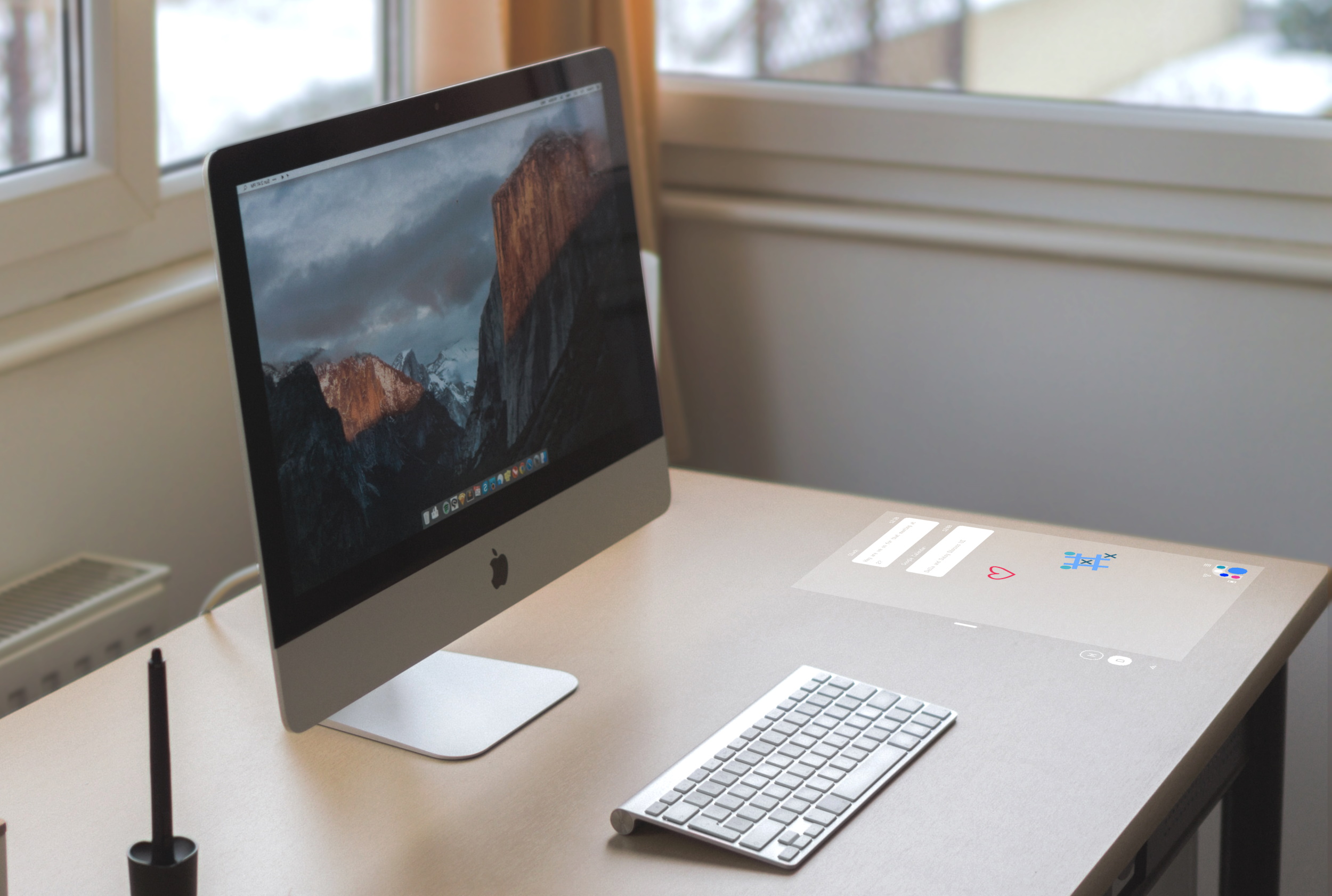 “What we’ve created is a modular tech platform that uses high-intensity LEDs with capacitive touch sensing. This allows us to embed it in essentially opaque material,” Dworman explained. “The wall, countertop, desk, in the home, the office, retail, transportation, we see so many ways to provide information and completely invisible controls.”

The surface would appear completely normal when the display is off, and indeed it is. Mui Labs, which demonstrated at CES its own natural material display, requires a specially perforated wood surface that you probably wouldn’t want to spill coffee on. A TouchWood display is just that: wood — or many other common surface materials.

A TouchWood surface in action. (The lines are an artifact of the camera’s framerate.)

It’s not meant to be a second display, but a friendly overflow for the information avalanche presented to us via our desktops, laptops, and phones… and speakers, watches, coffee makers, robot dogs, and so on.

“We’re not trying to put a computer in a surface — we want to provide you with a better touchpoint for your existing devices, to enhance their capabilities by taking away some of the information pressure that’s put on them,” said Asthana. 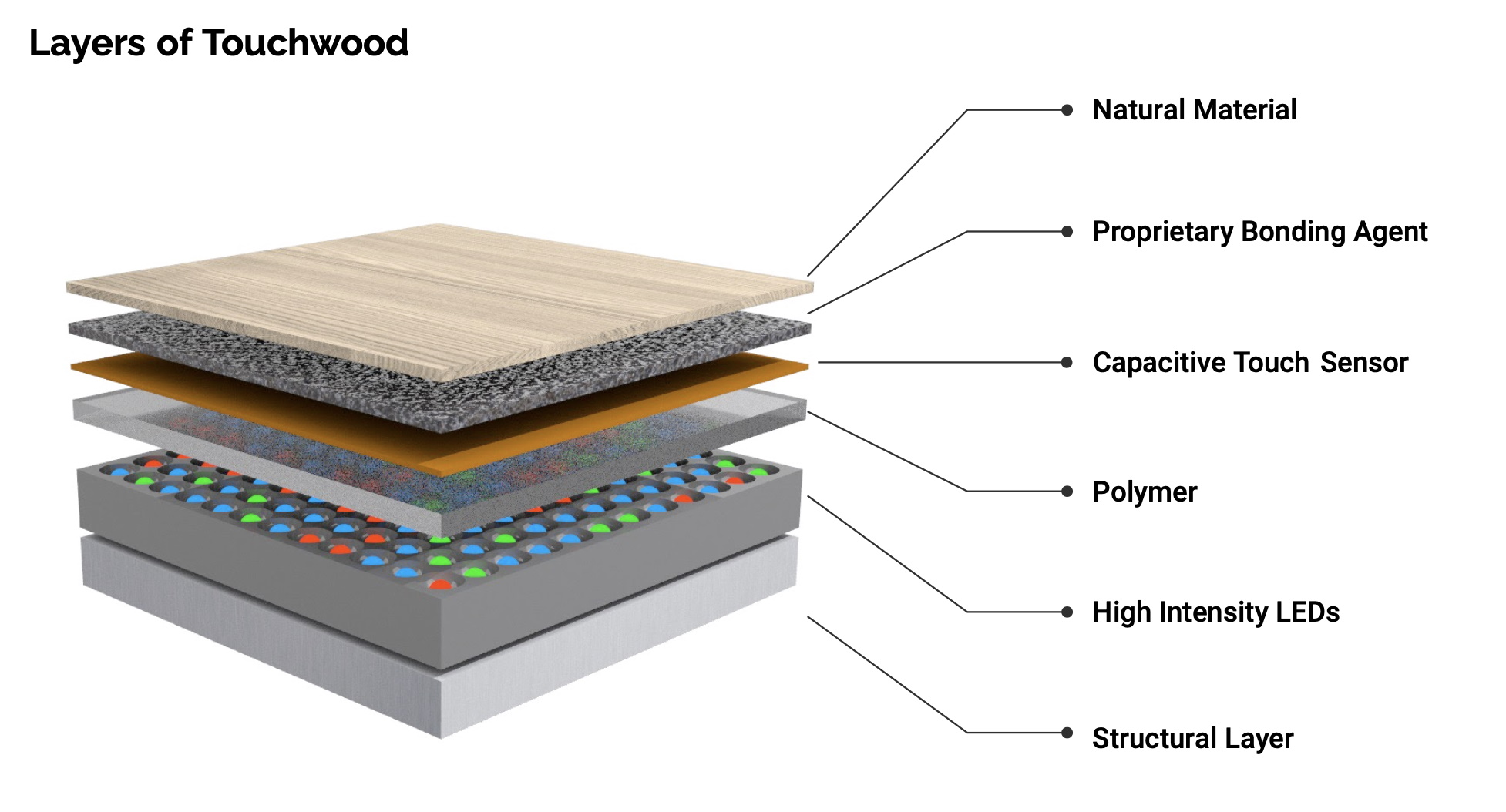 Perhaps you, like me, constantly flick your eyes towards the tabs in your browsers, or the apps arrayed on the bottom of your screen, to see if there’s any change — a new email, a message on Slack, a calendar item. A TouchWood desk would let those notifications take alternative routes, like a glowing circle off where you put your coffee or mouse. Tap it there and get a summary, or go to the content, or swipe it away — but you never have to switch tabs, or go to a different app, or unlock your phone. And when it’s done, the desk is just a piece of wood again.

Dworman sees the transition as natural. “Touchscreens the way we know them have really only been around for 10 or 11 years. But because they’re so ubiquitous we kind of take them for granted,” he said. “When you watch sci-fi films, this tech is still being used 500 years in the future! But it shouldn’t be. In car terms, the iPhone as it is now is like the Model T.”

TouchWood aims to be a platform eventually, but needs to launch a product of its own first. It plans to have a nice sit/stand desk with two large display areas available next year for somewhere in the $2,000 region. Expensive, yes — but you may be surprised what people will happily spend on new furniture, especially something like a major component of a newly important home office.

After proving out the concept with a flagship product, they can start working their way into other niches and working with partners. Embedding an invisible display in a countertop, wall, or of course a restaurant table leads to all kinds of use cases. Here’s hoping TouchWood’s tech leads to a future with slightly fewer screens in it — at least ones we can see.