A new startup called Kinspire wants to make it easier for parents to find activities to help keep kids occupied — away from a screen. The app, which launches with hundreds of activities vetted by parents and teachers alike, arrives at a time when the coronavirus pandemic has many families continuing to engage in social distancing, cutting kids off from regular playdates and other activities. Meanwhile, millions of schoolchildren are now spending long hours online, engaged in distance learning activities.

For parents, this rapid and dramatic increase in screen time has many looking for alternative ways to keep kids occupied and entertained, preferably offline. 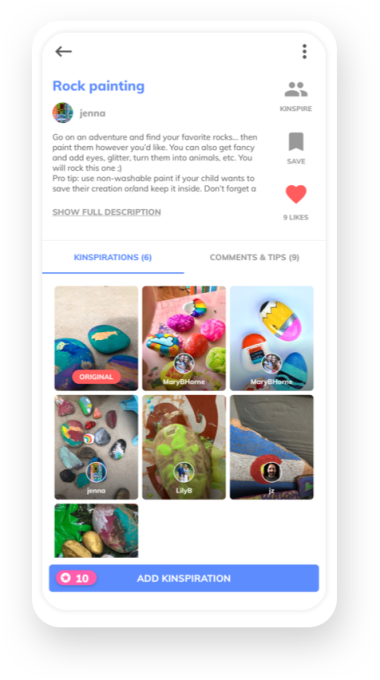 “We needed Kinspire in our lives as parents, so we built it,” explains Rob Seigel, PhD, a father of two and Kinspire’s CEO and co-founder. “Before Kinspire, I found it stressful having to search for an activity on websites and social media, then pitch it to my kids. Inevitably after all that work, they’d say no. Kinspire is the one-stop shop where kids can choose what they want to do, not what looks fun to dad,” he says.

He also wanted the app to offer the convenience of having the instructions and the materials together in one place. When quarantine started in the U.S., Seigel put a team together and built it.

At launch, Kinspire features over 350 screen-free activities, including project-based STEAM activities from Tinkerclass, via NPR’s “Wow in the World” — a kids’ podcast designed to encourage kids to think and “tinker” with ordinary household items. None of this content, at present, is paid, we’re told.

The Kinspire community will source the activities going forward by using the app’s “add activity” feature, after first creating their profile. Seigel says the team moderates the content through a combination of an A.I. moderation service and human review.

When you first open the Kinspire app, you’ll see a vertical feed of images, similar to Instagram. But instead of artsy photos or memes, kids and parents can scroll through the activity suggestions to find something fun to do. Each activity card will feature a photo taken by the Kinspire community, which includes teachers, activity creators, as well as parents and caregivers.

Some of the initial creators participating in Kinspire include Nicole Roccaro of @naturallycuriouschildren, Kari McManamon of @entertainmytoddler, Viviana Maldonado of @makethingsbox_, and Kira Silvera of @totsonlock.

Parents can also filter the suggested activities by age, whether it’s designed for indoors or outdoors, prep time, how much parental involvement is needed, activity type, materials needed, and even the mess level involved. (Now that sounds like a parent built this!) 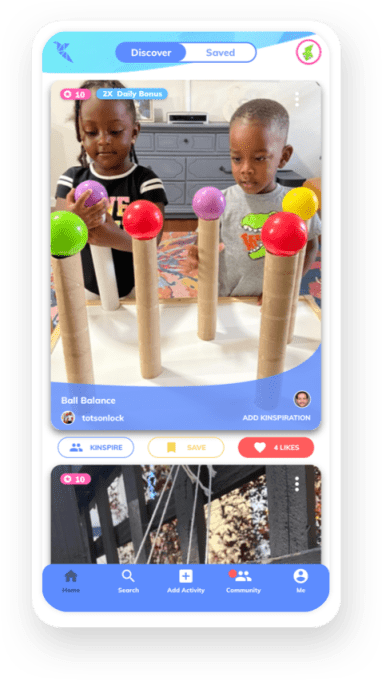 You can also save favorite activities you may want to try later.

As kids complete the activities in Kinspire, they earn in-app rewards as they accomplish things like doing a creative or scientific project, a nature exploration, engaging in pretend play, practicing cooking, math, music, mindfulness and more. Some of the in-app rewards turn into digital character badges for profiles. Rewards also deliver printable instructions to help kids build origami characters with paper from home.

The app could help homeschoolers, remote learners, and any other families who are struggling to come up with new ideas for kids after exhausting so many during the early days of the pandemic.

The company plans to generate revenue by adding a premium subscription that will allow parents to subscribe to individual content creators to receive exclusive, additional content within Kinspire. This also lets Kinspire’s creative content partners monetize, as they share in that revenue.

Kinspire is also working on shoppable activities, a top user request during testing. This lets parents easily purchase all the necessary materials for an activity directly in the Kinspire app, instead of having to go to Amazon or another store. Kinspire would take a commission on those purchases.

Denver and New York-based Kinspire was founded in May 2020, during the pandemic, by a team with backgrounds in tech and children’s play experiences.

Sara Berliner is on the founding team and is an advisor at YC-backed Hellosaurus, a new interactive video platform and creator tool. Before Kinspire, she co-founded children’s IP studio Star Farm (2002-2008), started and built the Kids & Family group at ScrollMotion, now Ingage (2008-2012), and was Chief Strategy Officer at Night & Day Studios, home of Peekaboo Barn, from 2012-2018. She’s also a mother of two.

Kinspire’s other co-founders Rob Seigel, Dave Tarasi, and Nate Ruiz, meanwhile, have a combined twenty years of experience at startups like HeadsUp, Nodin, SolidFire, and NetApp. CEO Seigel was previously co-Founder and CEO of HeadsUp, CTO at Nodin, and a software engineer at SolidFire/NetApp, in addition to being a father of two boys.

The startup is currently bootstrapped and raising a seed round.

The Kinspire app is a free download on iOS and Android in the U.S. and Canada.