A new report disputing the validity of Triller’s recently announced download figures led Triller to respond with the threat of a lawsuit. Triller, a newly litigious TikTok rival that could potentially benefit from a TikTok ban in the U.S., has been pushing to capitalize on the recent turn of events regarding its chief competitor. Earlier this month, Triller issued a press release claiming it saw a surge of new downloads following the news of a possible TikTok ban, bringing Triller’s app to a total of 250 million global downloads across iOS and Android. The company also separately reported 65 million monthly active users. Estimates from third-party mobile data and analytics firms call these figures into question, however.

Initially, the app store intelligence firm Apptopia crunched the numbers around Triller’s downloads and found the claim of 250 million downloads to be inflated. According to its analysis, Apptopia had estimated Triller’s app has been downloaded 52 million times since launch across both iOS and Google Play worldwide, not 250 million times, as Triller had said.

TechCrunch reached out to Triller for comment on Apptopia’s findings. Triller and Apptopia then ended up independently getting in touch with one another, through a shared investor. After some back-and-forth between the two, Apptopia decided to pull its report.

During this time, Triller also threatened to sue Apptopia for providing false information in a comment provided to TechCrunch.

Triller CEO Mike Lu told TechCrunch, via an emailed statement, that Apptopia “clearly have allowed themselves to become a pawn of these giant conglomerates, especially those like TikTok who we are in active litigation with for stealing our patents.” (Lu was referring to the recent lawsuit Triller filed against TikTok over patent infringement.)

“We would have welcomed Apptopia with open arms had they just reached out to us, and helped them understand our numbers, and now they have just made themselves part of our TikTok litigation,” Lu threatened. “We will be pursuing a claim against them for spreading harmful, false and knowingly damaging information,” he said.

This is a fairly aggressive response over a dispute about app store downloads. Industry insiders understand that none of the app store analytics firms have perfectly accurate figures. Meanwhile, regular consumers can get a sense of how popular an app is just by looking at the app store’s top charts, which are public.

Sensor Tower suggested the discrepancies between third-party estimates and Triller’s own numbers could have to do with how Triller counted its installs. Some publishers count other forms of installs, like re-installs, updates and direct installs of Android APKs (meaning, installs outside of Google Play). Third-party firms don’t see these figures. Third-party firms also don’t count things like re-installs because that’s effectively counting the same user twice. Sensor Tower, of course, doesn’t know how Triller was counting installs internally.

Though Apptopia is no longer standing behind its original report and estimate of 52 million installs, its report contained some other interesting insights that are still worth looking at, as they don’t rely on its forecasting technology.

For instance, Triller recently told CNBC it had 65 million monthly active users (MAUs). Counting an app’s MAUs is a way to measure its current usage and popularity. This tends to be a much smaller figure than an app’s total downloads, as not everyone who tries out an app sticks with it as a regular user.

Triller’s response to this part of the claim is that its app has changed a lot since its 2015 launch. It didn’t become a social media platform, for example, until 2018. It says if you look at the 90-120 day retention figures for TikTok or Snap, they would be above 30%, which is how its numbers should be compared. 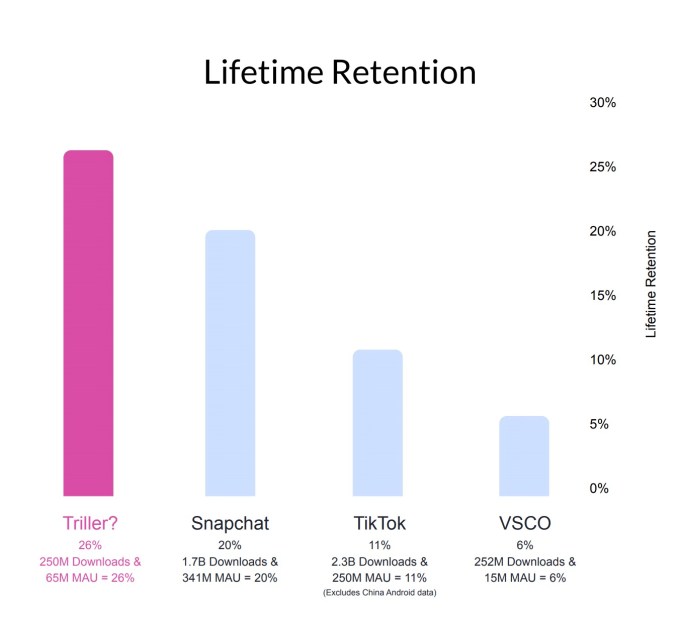 For those unfamiliar, the app store chart rankings are driven by downloads combined with other factors, like velocity of downloads, ratings, user retention and more. 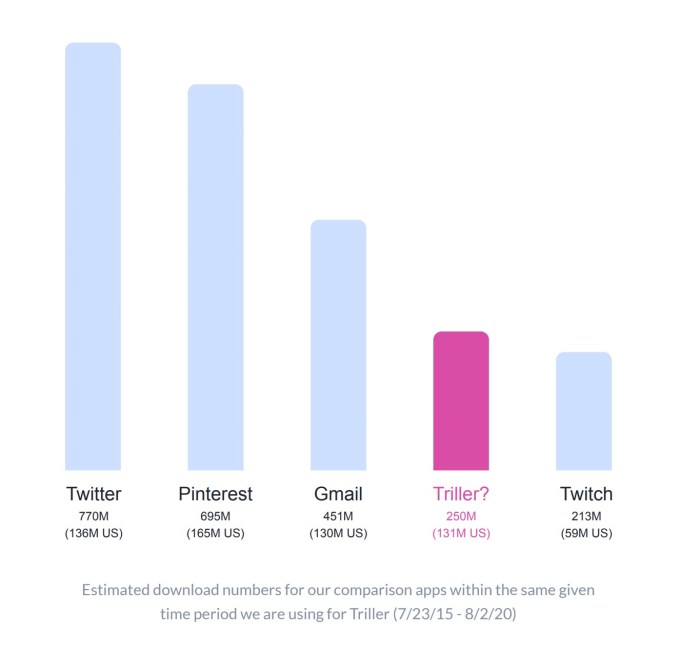 To analyze Triller’s claim in the context of its chart rankings, Apptopia examined several other popular U.S. apps for comparison’s sake, including Twitter, Pinterest, Gmail and Twitch.

These apps were selected because they had a similar number of U.S. downloads to Triller for the time period Apptopia used to analyze Triller’s claim: July 23, 2015-August 2, 2020. The former is the date of Triller’s launch and the latter is when it issued a press release stating its 250 million download figure. 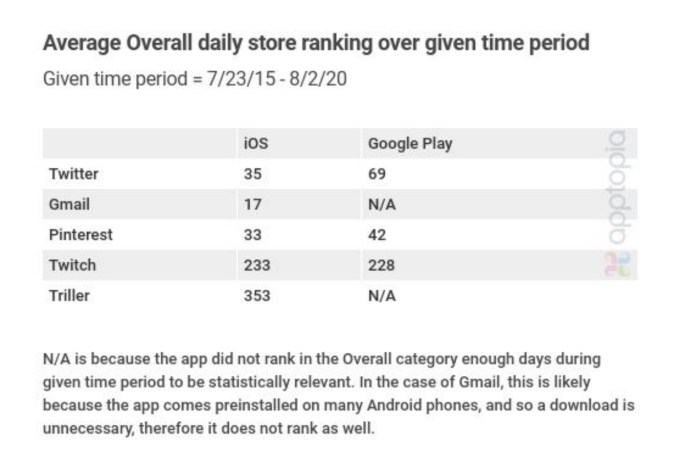 Simply put, if Triller’s 250 million figure was correct, then the app would seemingly appear much higher on the U.S. App Store and Google Play charts than it does.

On iOS, the average overall ranking for Gmail during this time period was No. 17, Twitter was No. 35, Pinterest was No. 33 and Twitch was No. 233. Triller, meanwhile, was No. 353. (Twitch is lower than the others because it’s a less-used app, because chart rankings aren’t entirely download-dependent and because many Twitch users stream on the desktop, not mobile. But even it ranks higher than Triller.)

You can see that Triller consistently trends well below the others in the U.S. charts. This trend is even clearer when zoomed into the last 90 days (see below).

Apptopia’s estimate here is also in line with App Annie’s data. Though App Annie couldn’t pull a lifetime average rank, as Apptopia did, it was able to pull Triller’s average U.S. iPhone App Store Overall rank for the past 90 days, which was No. 303. 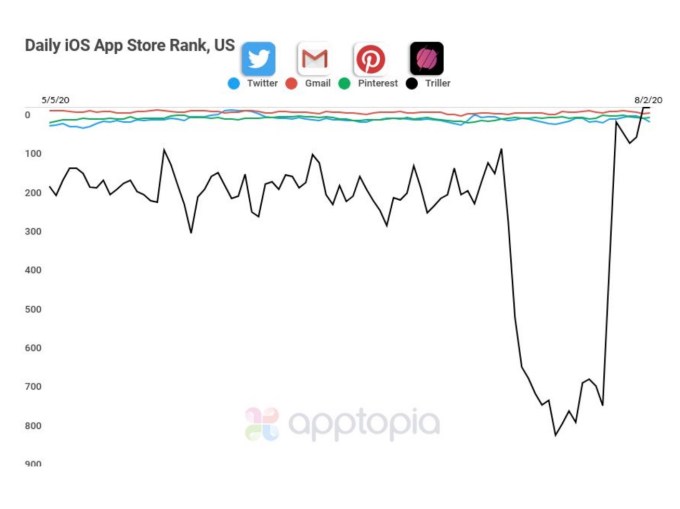 A similar trend can be seen on Google Play, where Triller doesn’t even rank in the Overall category enough days during the given time frame to be statistically relevant. (Gmail didn’t either, but that’s because the app is preinstalled on many Android phones, so users don’t need to download it.)

Triller’s response to this claim is that it, again, was a different app before 2018 and it has hit No. 1 in many non-U.S. markets, including Korea, where it’s currently No. 1. In the last 10 days, it has been No. 1 in Pakistan, Indonesia, Brazil, Mexico, Italy and France, and in the last 30 days in India, U.S., South Africa, Nigeria and dozens of others.

“Our growth and numbers are very fresh and very new, so taking anything long term or just the U.S. is neither relevant nor applicable to us,” said Triller CEO Mike Lu.

The timing of Triller’s claim of 250 million downloads follows reports that said the startup is raising hundreds of millions in new funding. Fox Business recently reported Triller has “commitments from investors of $200 million to $300 million.” Pegasus Tech Ventures, a Triller investor, emailed journalists in early August to pitch Triller coverage, saying the app was “now raising around $250m at a $1B valuation.”

None of this is coincidental. Triller has been angling to become the TikTok alternative that wins the U.S. market in the event TikTok can’t get a deal done in the time allotted by Trump’s executive order requiring TikTok to sell its U.S. operations or be banned in the country.

Mr. Lu disputed claims made by third-party mobile data firms, when reached for comment. The company stands by its numbers.

“No app intelligence firm has been provided our data,” Lu said. “Any numbers they provide have no relevance or accuracy to our numbers. We are able to validate each and every one of our users. They should also disclose which of our competitors are paying them hundreds of thousands of dollars such as TikTok,” he added.

Lu also openly wondered if a Triller competitor was feeding false information. His full statement is below:

The biggest app intelligence firms have less than 1M total users/customers and less than a few hundred large companies actually providing them real data, any numbers they present are based solely on guessing based on a very small sample group and are far from accurate. The terms of service of all app intelligence firms state that any numbers they provide come from their own guesstimates. While certain companies pay upwards of a few hundred thousand dollars to these firms and give them access to their numbers, we have not provided such access. Any numbers provided by them are wholly inaccurate and they themselves state they have no actual way of validating without us providing them access. These is clearly just a transparent attack by one of our competitors who pays them handsomely to disseminate this false information. It’s sad to see firms that are supposed to be neutral and claim to be pro entrepreneurial and pro American allow themselves to become a pawn of these giant conglomerates, especially those like TikTok who we are in active litigation with for them stealing our patents.”

Following their conversation with Triller, Apptopia tells us it will soon have access to more accurate figures for Triller and will release those at a later time. The companies seem to be working things out.

We are working closely with Triller who has been very transparent and is opening up all of their analytics accounts to Apptopia. We are working on internal reports and working with Triller to create the most accurate and up to date data over the short term. Between their tremendous success in emerging mobile markets, which are typically hard to model, (i.e. India, Africa, etc.) and the fact that Triller’s growth is very recent, it is especially hard to compare to peers who have years of growth and history. We feel strongly about publishing the most accurate estimates, and the best way for us to do that is to work hand in hand with Triller and authenticate their real data. We plan to do this over the coming weeks and do our best to be the source of truth on the matter.