The Galaxy Note Ultra is a $1,399 smartphone. Even by Samsung’s standards, this is a high-end luxury device. It’s the phone for people who board the plane early and derive a sense of pride in watching the rest of us slowly shuffle onto the plane, wondering just how close to the back we’ll get.

Sure, most or all of these features will eventually trickle their way down into less-expensive models, but this is the phone for those willing to pay a premium to get a year ahead of the competition.

5G is the perfect example of the phenomenon. Still a luxury on last year’s models, it’s now standard across the Note line (and almost certainly will be with the Galaxy S when the new models arrive in six months). The world’s cellular networks may not have been ready to support it at the time, but it was yet another bleeding-edge tech available for early adopters willing to pay a premium.

The truth of the matter is you’d be getting a nice phone whether you opt for the Note 20 or Note 20 Ultra — or, for that matter, any member of the S20 line. In spite of the $400 gulf, there are only a few key differences between the Note 20 and the Ultra. The first and most immediate difference is the screen. That’s how you know you’ve got a truly premium device. It’s really, really big.

Here that means the difference between a 6.7-inch (2,400×1,080) and 6.9-inch (3,088×1,440) display. It’s a far smaller difference than the gulf between the 6.2-inch and 6.9-inch S20 options. It’s ultimately to the detriment of the Note line that its largest screen size is the same as the S20, and that there’s relatively little size difference between the two Notes. I would say that the high-end is really starting to bump up against the ceiling on smartphone screens, but we’ve said that time and again, and yet here we are. 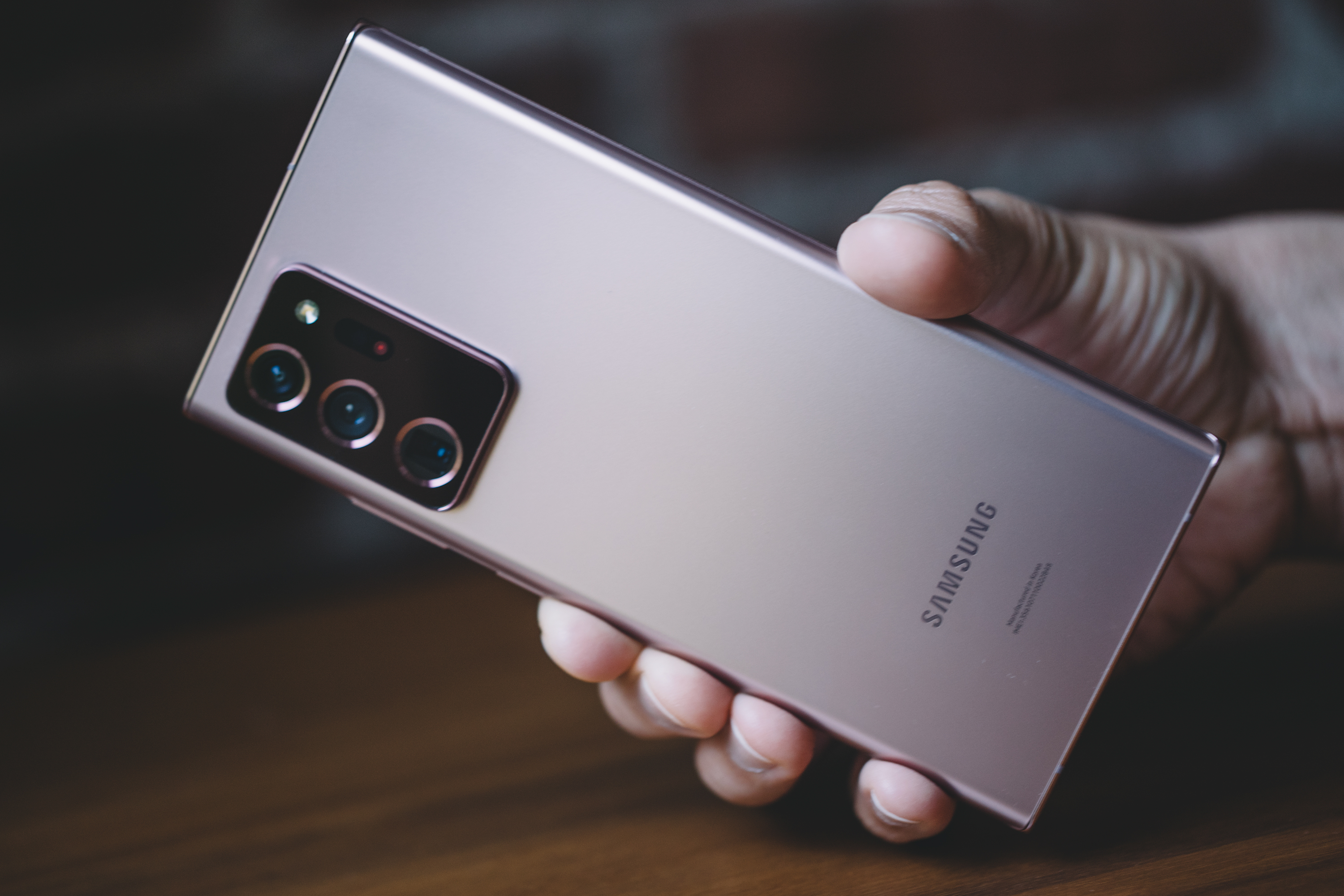 The primary factor that has facilitated the Note’s growth from what seemed like an impossible large 5.3 inches to 6.9 in its nine-year existence is Samsung’s commitment to reducing the handset’s screen-to-body ratio. Even so, the Ultra is a very large phone. I can’t wrap my hand fully around it. Honestly, depending on the size of your hands and/or pockets, the sheer size of the product could well be a deal breaker.

The upshot of having such a big phone is that you get more space for a battery. Here that means a 4,500mAh battery life to the 20’s 4,000. That’s good, but still significantly smaller than the S20 Ultra’s 5,000mAh, likely owing to the presence of the S Pen slot, which eats up a chunk of the internal footprint. I was able to make it more than 24 hours on a single charge (closer to 28), definitely hitting the company’s benchmark of “all day” life.

Your results, as ever, will vary. But that goes double in a time when 5G coverage remains spotty in the U.S. Samsung sent a model with a Verizon SIM (TC’s parent company, for the record). I wasn’t able to get onto the 5G network in Queens where I live, but things did flick on when I walked across the bridge into Manhattan over the weekend. In a more ideal situation, I would be able to do a more controlled test between LTE and 5G battery ratings, but it’s 2020 and ideal is far too much to hope for. 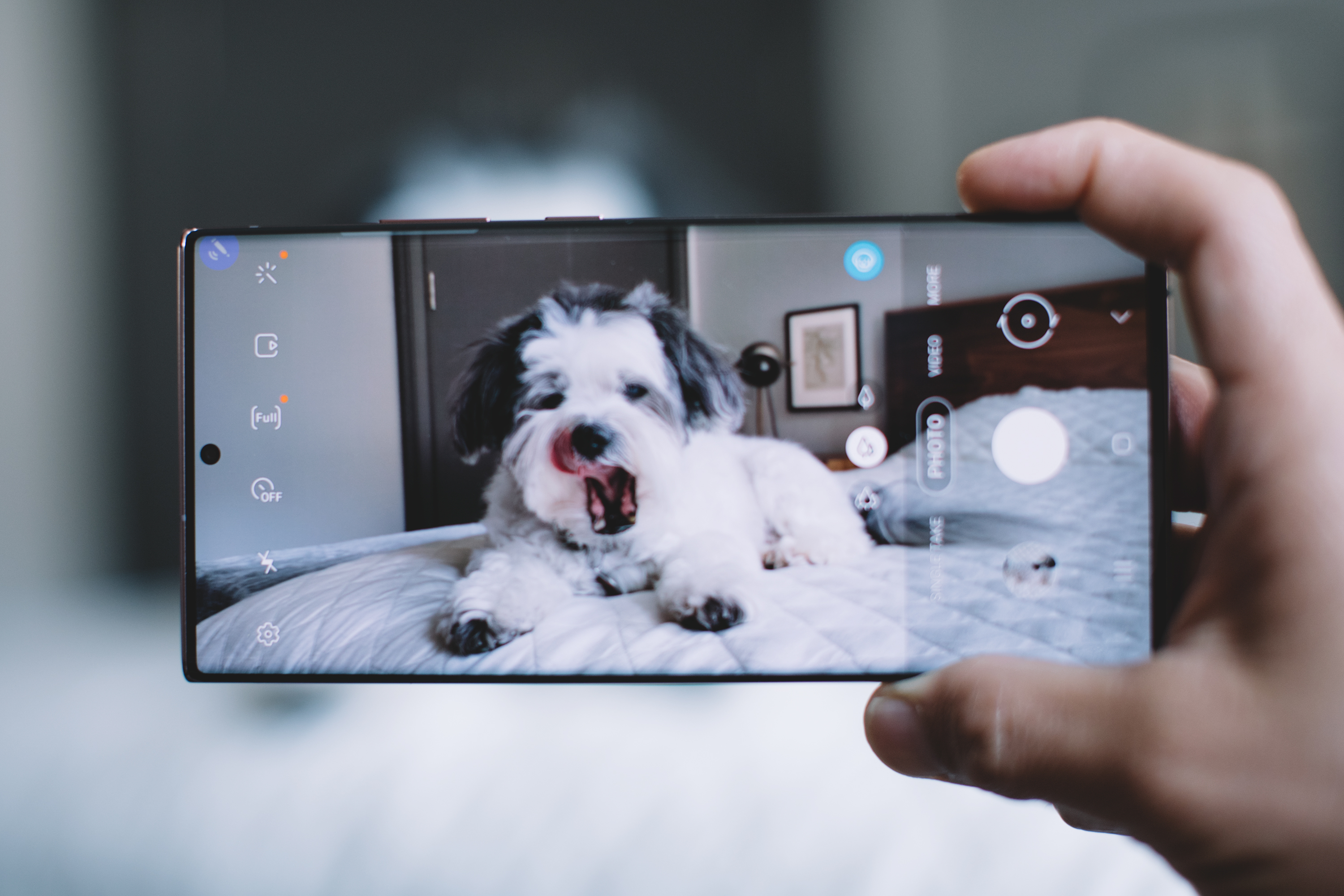 The other major difference between the Note 20 and Note 20 Ultra is, of course, the camera. Once again, the camera module is massive. Samsung’s freshened up the industrial design a bit, but it’s frankly still pretty massive. That’s forgivable, however, when you factor in what the handset is packing here. Both new Notes sport a triple camera system, but the Ultra swaps the 12-megapixel wide lens for a 108-megapixel, joining the 12-megapixel ultra wide and 12-megapixel telephoto. 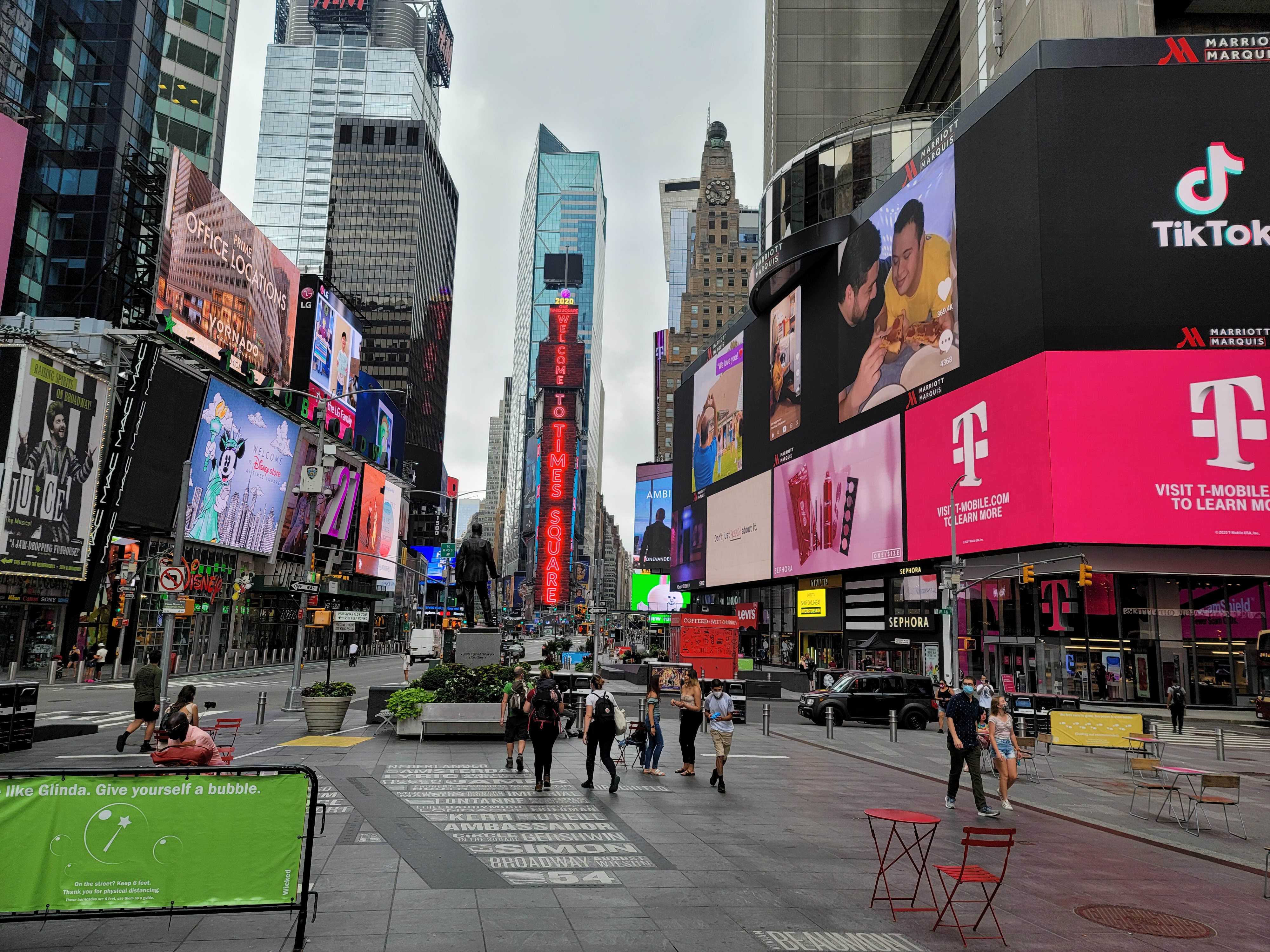 The setup is similar to the S20 Ultra’s, with a few important distinctions. For starters, the time-of-flight depth camera has been swapped out for a laser autofocus. The TOF definitely feels like a more future-proofing aspect. In addition to current portrait mode demands, it will likely play an important role as augmented reality becomes an increasingly important aspect of mobile software, going forward. That said, laser autofocus just feels more pragmatic for the demands of everyday picture taking. And even without portrait mode enabled, the camera setup has a real and effective bokeh on images and is pretty effective with close-up macro photos. 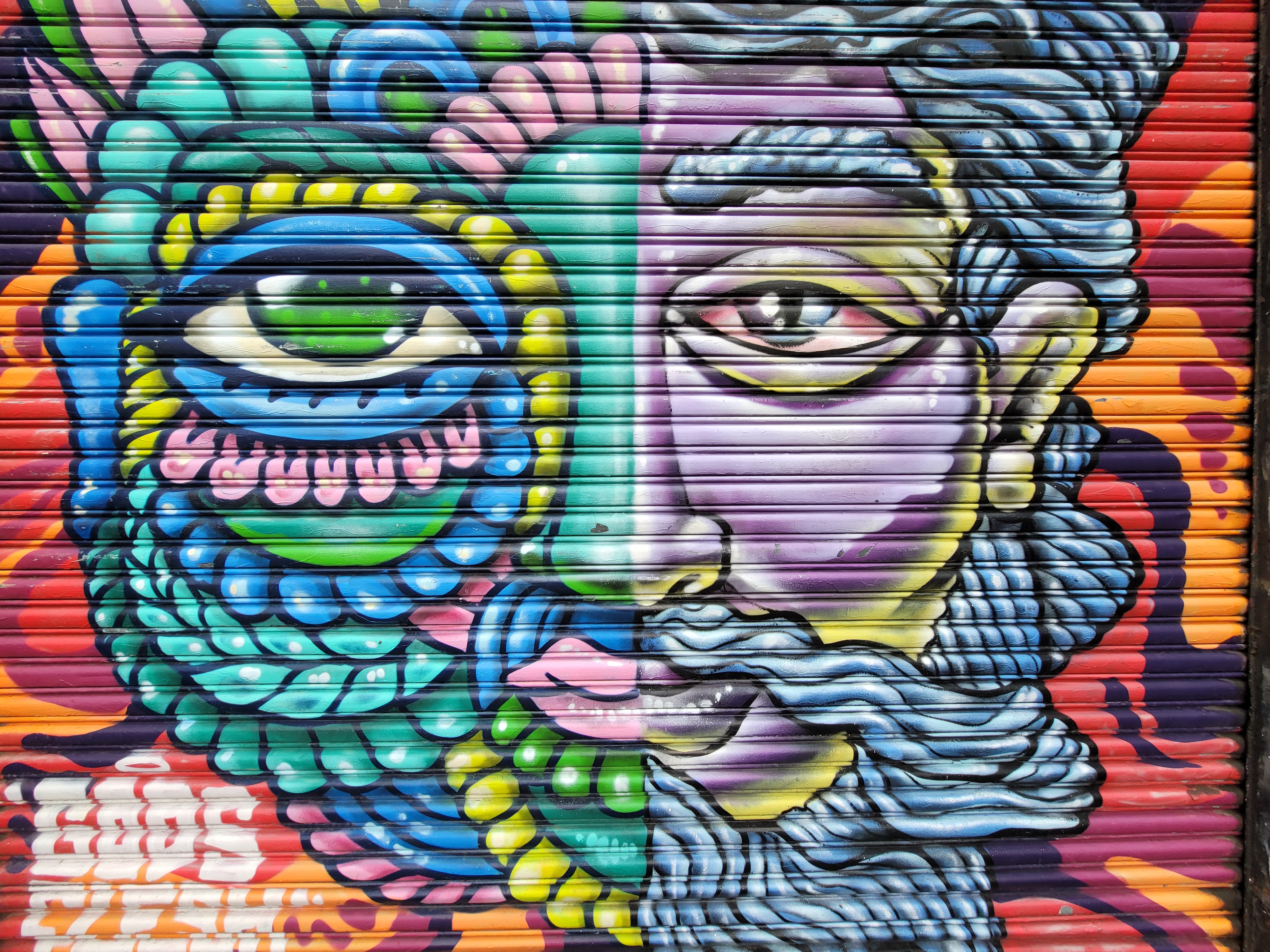 The other big update here are some tempered expectations on the Space Zoom front. Introduced for the S20 Ultra, the feature promised a mind-boggling 100x zoom. The truth of the matter was less exciting, as anything approaching that top number was ultimately unusable. Most shots ended up looking like a work of abstract impressionism. The Note Ultra keeps things to a still-impressive, but more manageable, 50x. 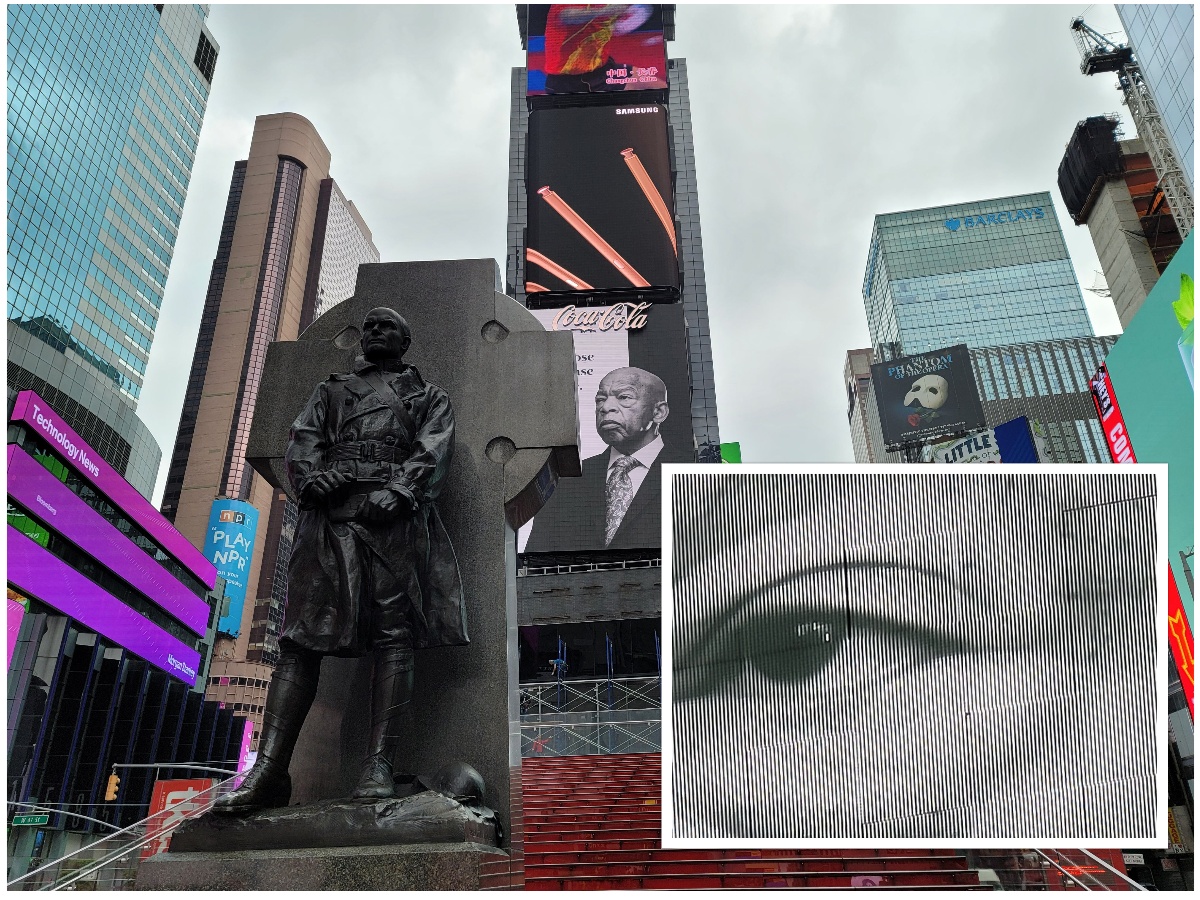 You’re still risking some fairly serious image degradation at that number, but overall, the results are going to be more pleasing than going double that number. And overall, the zoom on this thing is really excellent. Using the default photo software, I’d recommend sticking to the three tree icons to switch between the three primary cameras. That will keep it at a maximum 10x optical zoom. But if you need a bit more than that, go for it.

Samsung’s approach to camera quality has been largely hardware-focused, and the results are clear in the images it takes. It’s a contrast to Google’s approach, which seeks to almost exclusively differentiate itself with computational photography. The Pixel’s camera is very good in its own right, but it just can’t compete with the Note on things like quality zoom. Of course, Samsung’s approach costs money. It’s important to remember that we’re talking about a $1,400 phone here, friends.

The screen is really excellent. The colors can be a bit oversatured for my tastes — particularly when it comes to bright reds, but that’s an easy fix by toggling from “vivid” to “natural” under screen settings. For some the reds might be a bit muddy under the latter setting. Either way, it’s really just a matter of personal preference, but I recommend playing around with it. The 120Hz refresh rate makes for some extremely fluid animations, but this is also one of those features you can easily disable when you need to conserve battery.

The directional mic was one of the more underrated features introduced on the S20, allowing you to determine the focus of the audio recording based on the device’s positioning. Cooler still is the ability to use the Galaxy Live Buds as mics while recording. That’s something that will come in handy for standup interview videos, particularly in noisy environments. 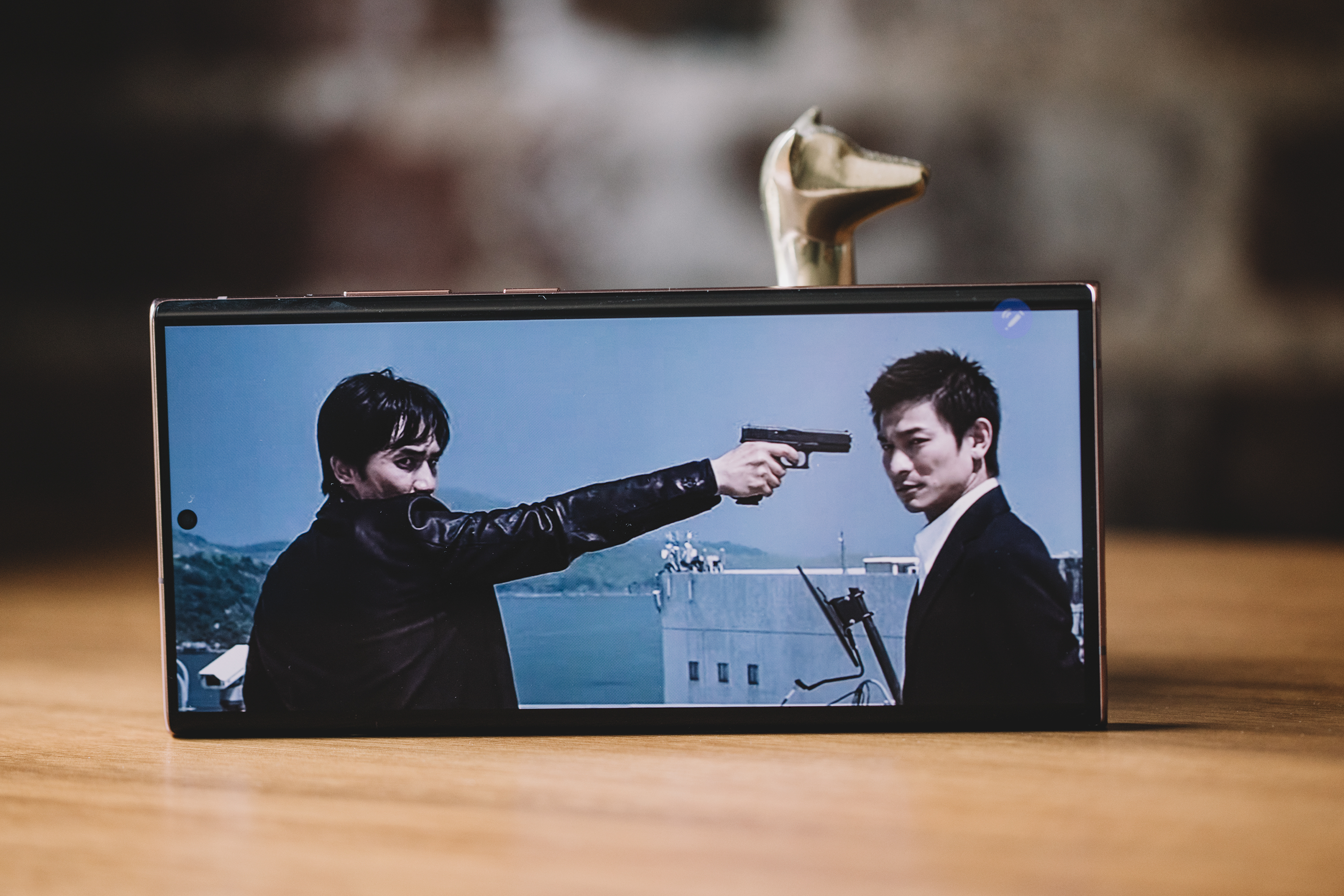 The Note 20 is among the first devices to sport the Snapdragon 865+ — essentially an overclocked version of the flagship 865 you’ll find on the S20. The clock speeds are a bit souped up here and graphic performance has been improved by about 10%. Mobile processors don’t really get better than this in 2020. I plan to post something a bit more complete on the Microsoft partnership that brings some exclusive Game Pass content to handset (honestly, I’m waiting on one of those Bluetooth mobile Xbox controllers at the moment).

But this thing sings for most of your everyday tasks, and will likely be one of the better handsets for cloud gaming, as the latest flagship Snapdragon has been paired with 12GB of RAM. There’s also a good 128GB of storage here, expandable to a very good 512GB. Better still, that can be expanded to a ridiculous 1TB courtesy of the microSD slot (also available on both S20 models, but absent in the regular Note). 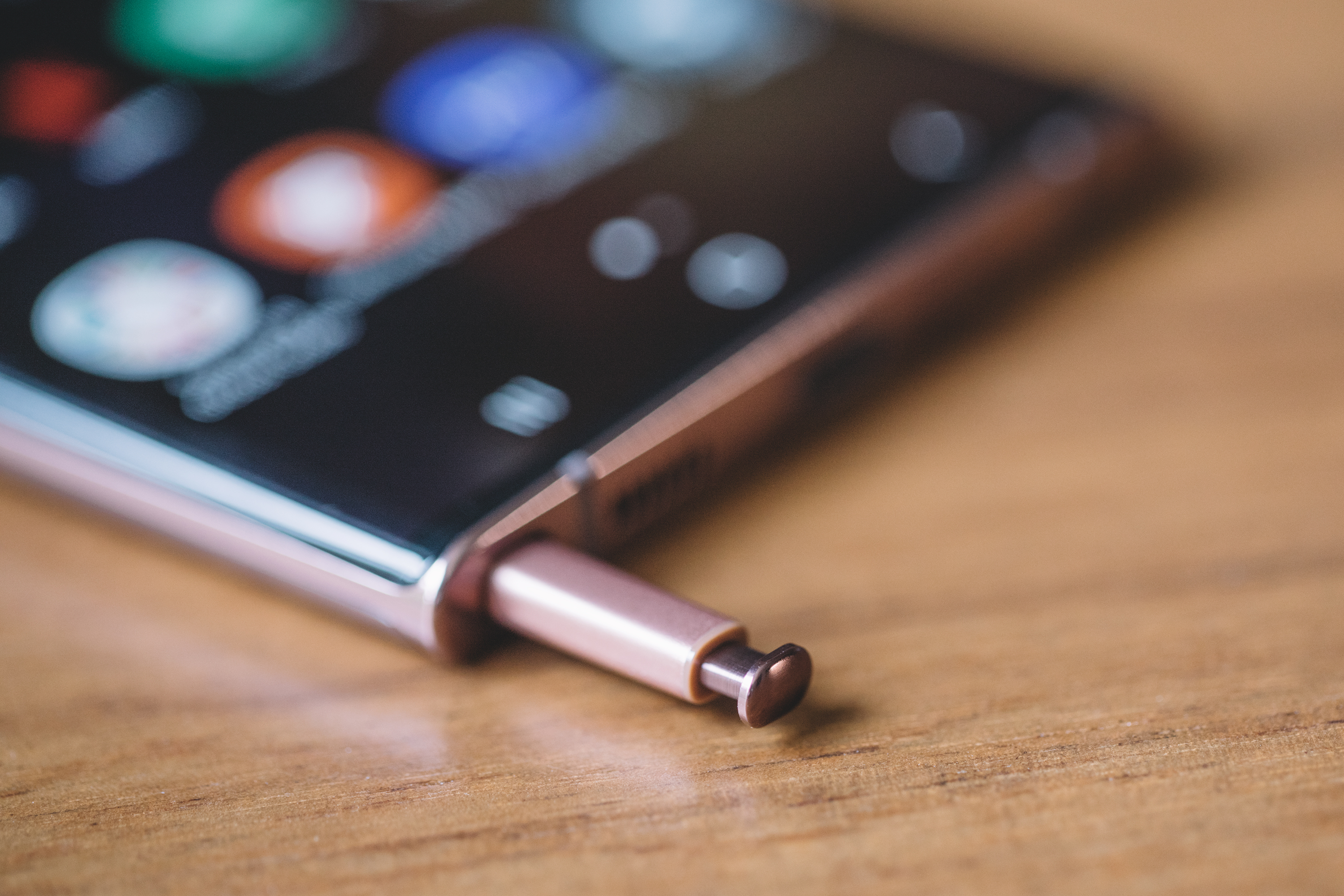 I probably write this every time a new Note comes out, but I’m not really a stylus person, even after nearly a decade of playing around with Note devices. That said, I continue to be impressed with the device’s ability to recognize my truly terrible handwriting. Maybe I’ll be a convert one of these generations. Stranger things have happened I guess. The S Pen is quite refined and very responsive after all of these generations. Air Actions let you use the stylus as a control even at a distance — a neat enough feature, but once again one I don’t see myself using. Other cool new additions here include Audio Bookmark, which will sync recordings to the notes you’re taking. Definitely helpful, though I anticipate it will be more so when Samsung introduces live transcriptions à la Google Recorder one of these generations. 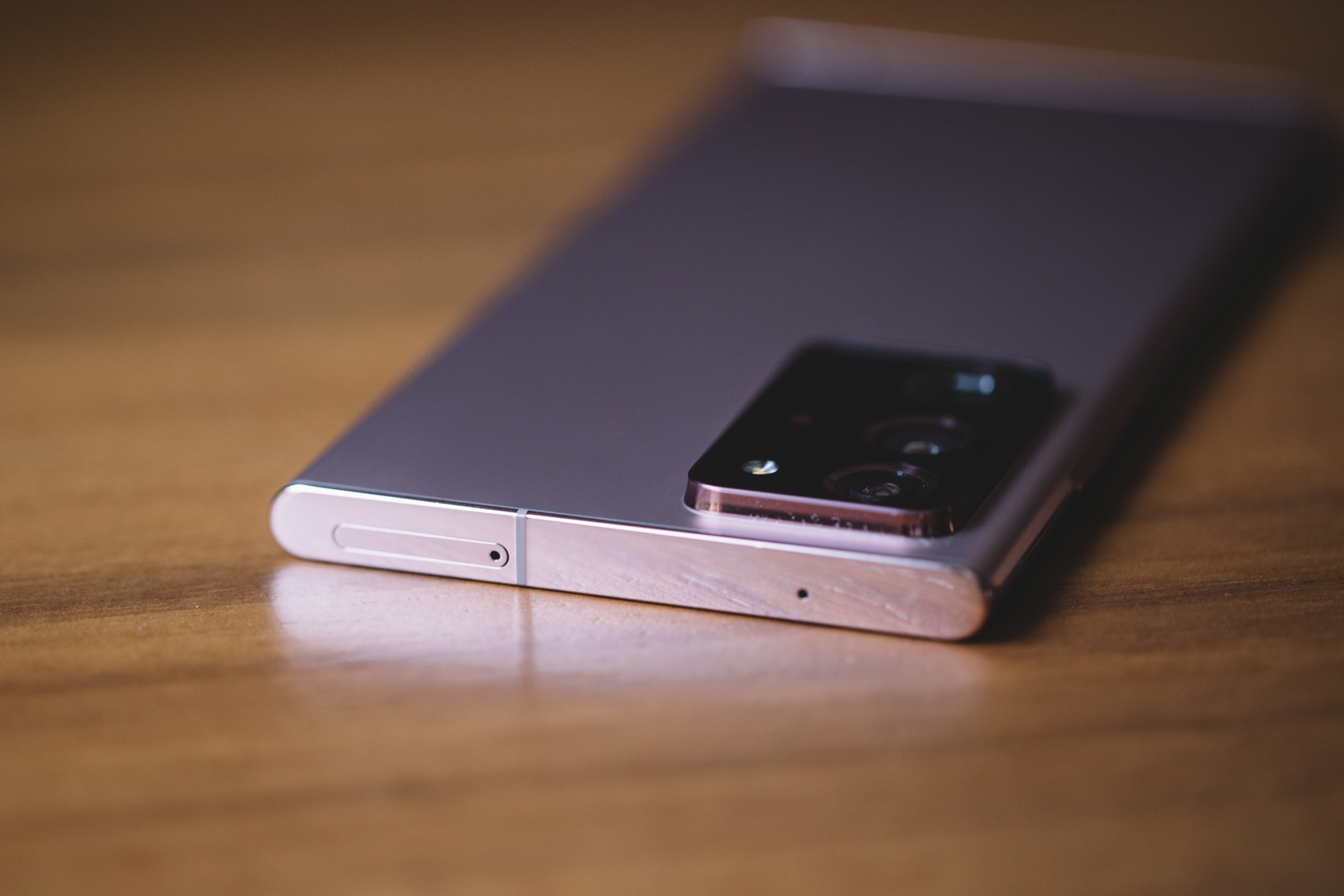 If you’ve read enough of these bi-annual Samsung flagship reviews, you probably know what’s coming next. The Note represents more of a refinement over its predecessor than something more substantial. If your Note is a year or two old, you certainly don’t need to run out to replace that also very-good phone. That’s just sort of where we’re at in the life cycle of the mobile industry. On the whole, updates just feel more incremental.

But as with each of these devices, the Note 20 Ultra represents some of the finest mobile hardware you can purchase at this point in time. The camera, especially, deserves to be called out for its truly excellent capabilities. But, as ever, the finest is going to cost you. If you can stomach the idea of a $1,400 Android phone, they don’t come much better than the Galaxy Note Ultra.