The expansion aims to help differentiate Apple Music from current rivals, like Spotify and Pandora, both known for their personalization efforts with algorithmic-driven playlists tailored to user interests. While Apple Music offers its own, smaller selection of personalized playlists, it also wants to better establish itself in the role of tastemaker and a tool to connect fans with artists. That’s where the streaming radio stations come in.

More broadly, the idea behind streaming radio is to cater to people who, sometimes, just want to turn on music without having to think about what they want to hear or dig around for a favorite playlist. That was the original promise of terrestrial radio, and Apple believes the formula can still work on modern-day streaming services, as well. 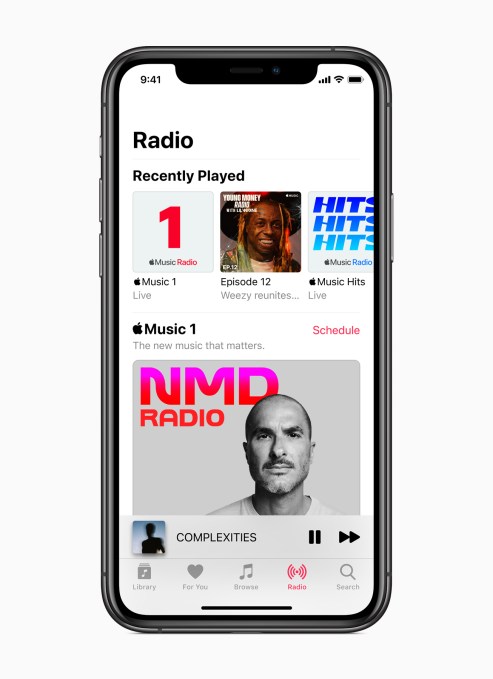 Meanwhile, the addition of the newer stations began to paint a picture of a radio service that caters to specific tastes and interests. The new naming format of “Apple Music X” also leaves room for Apple to continue to expand its radio lineup over time to include more genres and thematic stations.

Though Apple Music Radio is a product that helps Apple’s subscription service stand out, it’s not clear to what extent it’s seen by consumers as a huge selling point that has them choosing Apple Music over a competing service, like Spotify. Instead, Apple Music is likely opted for by those who prefer Apple’s design aesthetic, the convenience of a native app that works well with Siri, and those who fully participate in the Apple ecosystem across their devices.

With the expansions and rebranding, music listeners will be able to ask Siri to play “Apple Music 1,” “Apple Music Hits,” or “Apple Music Country” — a selection that will be easy to remember as it grows over time, thanks to the simplified naming format.

“For the past five years, if ever there was a meaningful moment in music culture, Beats 1 was there bringing human curation to the forefront and drawing in listeners with exclusive shows from some of the most innovative, respected, and beloved people in music,” said Oliver Schusser, vice president of Apple Music, Beats, and International Content, in a statement. “Now, Apple Music radio provides an unparalleled global platform for artists across all genres to talk about, create, and share music with their fans, and this is just the beginning. We will continue to invest in live radio and create opportunities for listeners around the world to connect with the music they love.”