Triller, the short video app backed by a Hollywood mogul and music celebrities, is rapidly ballooning in both user size and valuation. It’s now seeking a new funding round of $250 million that will push its valuation to over $1 billion, according to a source with knowledge of the matter.

That’s a leap from its $130 million valuation reported last October. Triller’s founder and CEO Mike Lu declined to comment, although another executive confirmed the funding with Dot.la.

The app has emerged as what many see as a TikTok replacement, but it has been around since 2015, two years before TikTok’s debut, and has its own “identity and ecosystem,” the founder insisted.

According to Lu, Triller was already recording “significant growth” even before the Trump administration began mulling a ban or a forced sale of TikTok, although he also admitted the app is getting a boost from the TikTok backlash. 35 million new users joined Triller just within the last few days. The app has so far collected 250 million downloads worldwide.

The Los Angeles-based startup still has a long way to catch up with TikTok, which crossed 2 billion downloads in April. The rivals both tout their capability to let users match videos with music, a defining feature for their success. In fact, Triller recently filed a lawsuit accusing its Chinese rival for infringing its patent for “creating music videos synchronized with an audio track.”

Triller attributed part of its achievement to majority investor Proxima Media, the Hollywood studio founded by Ryan Kavanaugh. Lu said his company has spent zero in marketing to reach its size, something that “has never happened in technology history.” But Ryan, the film producer and financier behind hits like The Fast and the Furious and The Social Network, has no doubt brought unmatched media exposure, celebrity connections, and naturally, their fans who convert to Triller users.

Made with @triller #triller do you have what it takes?Finding the worlds next #superstar. @migos @starrah the new #americanidol @boostmobile pic.twitter.com/x0DlNttoaA

Triller has also secured deals with major record labels, clearing the way for users to make music-centered videos. Its roster of angel investors include Snoop Dogg, The Weekend, Marshmellow, Lil Wayne, among other big names.

“Ryan is second to none in Hollywood, entertainment and media,” said Lu. “I give [Proxima Media] a ton of credit for helping us get to this stage, this massive growth. I don’t think we could have done it without them.”

Celebrity-quality content is one thing that sets Triller apart from TikTok, said Anis Uzzaman, general partner of Pegasus Tech Ventures, which invested in Triller in a strategic round.

“TikTok tries to grow its own celebrities. Triller already has all the big celebrities,” the investor said, refering to videos shared by Alicia Keys, Cardi B, Marshmellow, and Eminem via Triller, which is now a popular place for releasing songs. TikTok has also become a testing ground for artists to test new works.

“It gives the young people a feeling that they are close to celebrities,” observed Uzzaman.

For Lu, Triller’s identity is anchored in music, especially hip hop music in the early days, with a demographic of 18-25. 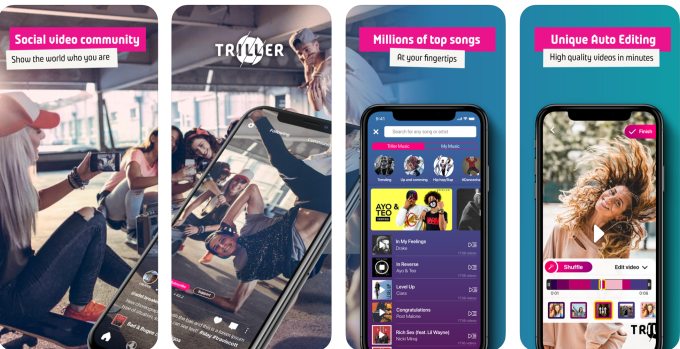 TikTok, in comparison, can be everything from light-hearted dance videos to goofy skits. One gets a hint of their differences from the visuals they picked for their App Store pages. 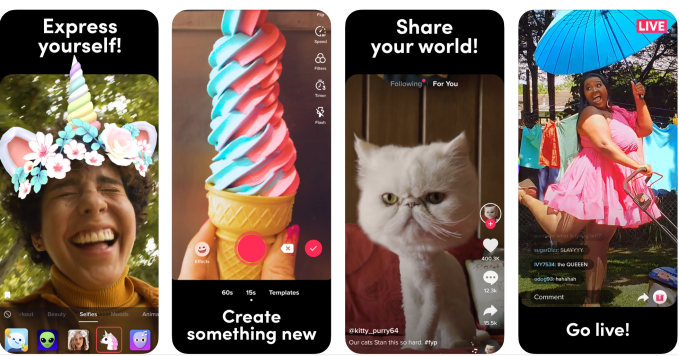 The fate of TikTok could still change dramatically in the coming weeks, although so far, there’s a decent chance that Microsoft may scoop up the Chinese-owned app. Some startups are betting that their US identity will help them win over users from TikTok, but a survey done by California-based Creative Digital Agency suggests that may not be the case.

65% of the hundreds of TikTok users it asked said they won’t feel more comfortable with their data policies even if TikTok were an American company, and 84.6% believe the proposed ban is motivated by political concerns.

“The vast majority believe that all American social media platforms are doing exactly the same thing in mining personal data, which is the big privacy concern,” the agency’s managing director Kevin Almeida suggested.

That said, TikTok’s growth has slowed down recently, as some creators hedge the risk of losing followers in the case of a ban. The app’s installs in the US last week were down 7% compared to the four-week average, shows data from analytics firm Sensor Tower. Its total downloads in the US are close to 190 million.

Triller is hardly the only US startup thriving against the backdrop of TikTok’s uncertain future. At least three other micro-video apps have seen new downloads in the hundreds of thousands in the US over the past week, according to Sensor Tower, and two are rooted in China.

They are Byte, Dom Hofmann’s new app after Vine was shuttered by Twitter; Zynn, which is run by Kuaishou, TikTok’s Chinese homegrown rival; and Likee, operated by Bigo, a Singapore-based company acquired by China’s YY. These apps totaled downloads of 2.9 million, 6.4 million, and 16.3 million in the US, respectively.

Growth of TikTok’s old rival Dubsmash isn’t as remarkable but the app has the most US installs among the competitors, reaching 41.6 million recently.

In comparison, Triller has accumulated 23.8 million downloads in the US. The app has seen a surge in downloads in India following the country’s TikTok ban, but it has also ranked among the top photo and video apps across multiple European and African countries where TikTok remains accessible.

The company operates a global team of 350 employees, most of whom are in the US and work on content operation and engineering.