Founded by former Google engineers, Brief is a newly launched news app that aggregates and summarizes the news in hopes of tackling a number of problems with today’s news cycle, including information overload, burnout, media bias, and algorithms that prioritize engagement over news accuracy.

Today, there are so many places to read the news and many aggregators on the market offer access to a near-infinite number of sources. Meanwhile, algorithms profile you to determine your leanings, then serve up more of the news that fits your worldview, to keep you engaged with the product.

Brief’s founders wanted to make it easier to stay informed on key topics without having to spend hours reading the news from a variety of viewpoints to get the full picture.

Before Brief, co-founder and CEO Nick Hobbs was a Google product manager who had worked on AR, Google Assistant, Google’s mobile app, and self-driving cars, among other things during his time at the company. Co-founder and CTO Andrea Huey, meanwhile, was a Google senior software engineer.

The two met while building the Google iOS app and left, says Hobbs, “after becoming increasingly alarmed by the damage technology is doing to public discourse.” 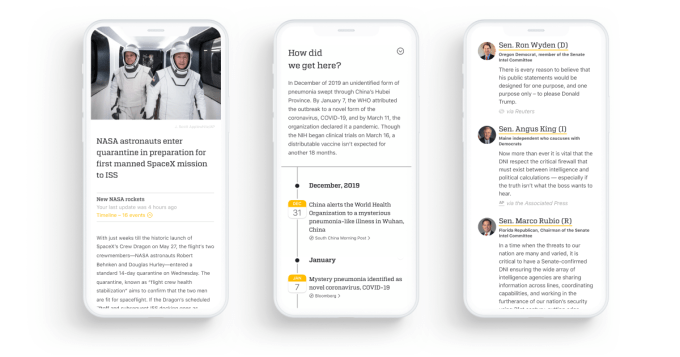 Brief (which was founded as Broadsheet), is staffed by similarly-minded, mission-driven team, including engineers from Apple and Google, and a small editorial team who had worked on curation and fact-checking at Snapchat and Wired.

Before today, the company tested a beta version of their news app on the Apple App Store. The version arriving on Tuesday offers a new design, feature set and overall experience.

Brief’s app is a lot different from what you might expect from a news aggregator like Apple News or Google News, for example. It’s not meant only as a tool that points you to news articles published elsewhere, that is. Instead, it summarizes the key fact, provides context, and offers viewpoints from both sides. 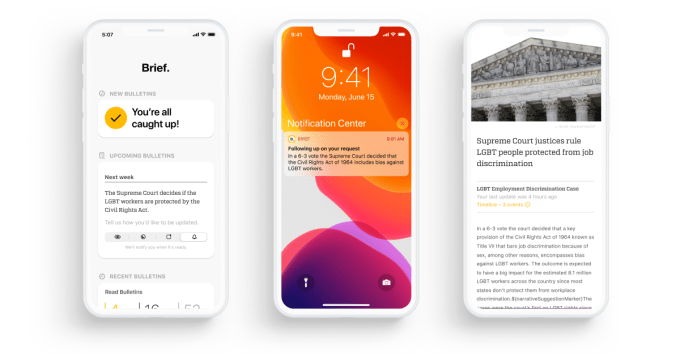 “Traditional aggregators were designed to help readers discover more and more content—a vestige of the days when it was actually hard to find enough interesting stuff to read online,” explains Hobbs. “However, now that the internet has ‘grown up,’ everyone faces the exact opposite problem: there are so many things clamoring for our attention we end up skimming everything and understanding nothing,” he says.

Brief takes the opposite approach. Instead of offering far too many articles to actually read, Brief gives you just a few, easily digested news bulletins crafted by journalists. These “front-page” story summaries will help you keep up with key developments in areas like U.S. news, politics, business and technology, among others. Much of the content for Brief comes from its licensing of AP wire feeds, but it will feature breaking news stories and exclusives from other sources, as needed.

These bulletins are also paired with timelines that help you understand the latest development in context and relevant quotes offering different perspectives. 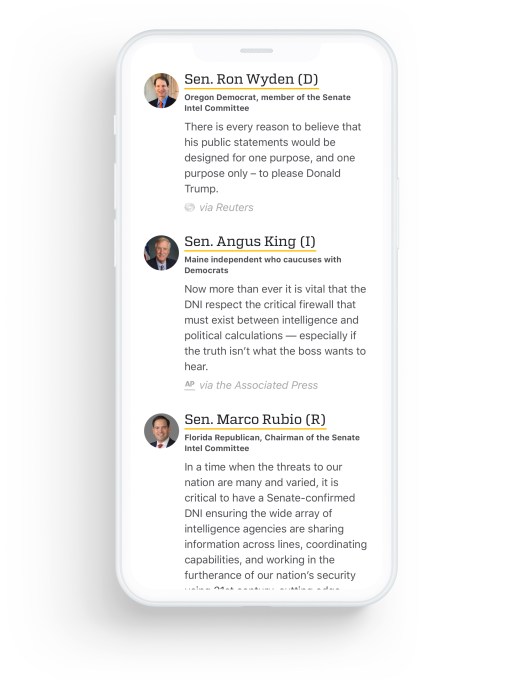 The result is that you’re able to catch up with the most important news in only minutes, not hours — hence the app’s name, “Brief.”

One key area where Brief aims to differentiate itself is how it will heavily rely on human curation.

“We strongly believe that human editorial judgment is irreplaceable, which is why our newsroom decides which stories are covered and what priority they’re given,” notes Hobbs.

This is similar to how Apple News relies on a human editorial team to program its own News app, for instance. But in Brief’s case, journalists aren’t just selecting the news to feature, they’re also helping to translate it to this short-form news reading experience.

That said, Brief does lean on technology where it makes sense. Algorithms help to smartly organize the content in the app and its software will automatically archive the stories you’ve already read to keep you focused on what’s new to you.

Perhaps just as important as its efforts to address the information overload crisis, Brief also attempts to tackle issues around increased polarization of the news. This problem has led to readers isolating themselves within their own ideological bubbles and among their prefered set of either right-leaning or left-leaning sources.

Though it won’t stop news addicts from clicking on their prefered, if biased, cable TV news channel, Brief hopes to reach those who are, in fact, interested in hearing a more balanced perspective. It even aims to reach those who have largely given up on news altogether, due to being overwhelmed. 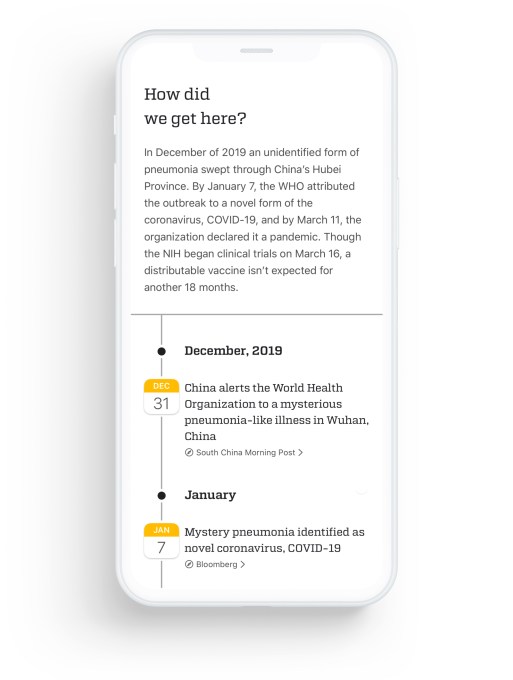 To counteract bias, Brief first ensures that all users receive the same information. Its algorithms will not attempt to profile you to determine your leanings, then feed you ever more of the content you’re naturally inclined to seek out.

And not only do all users see the same news, all content is ordered the same, too.

To tackle bias in the framing of news stories — including the selective uses of quotes and biased sources — Brief introduces a feature called “Perspectives” that presents a range of influential voices for every story. This, again, is viewed by all users in the same way.

For example, a story around U.S. politics may include relevant quotes from both the Republican and Democratic senators or representatives. That means users will see the way both sides are thinking and talking about the topic at hand, and they won’t be spared from the “other” side’s views, however distasteful.

In the case where one side is effectively being untruthful, the app’s timeline feature comes in handy. This feature aims to give the news more context, which can help highlight was was actually said and done and when that took place. The timeline can also be useful for tracking updates on a politicized issues where often much of the talking is being done by voices on one side, while the other stays quiet. At later times, who’s being vocal may shift from one side to the other. The timeline helps keep this in balance. 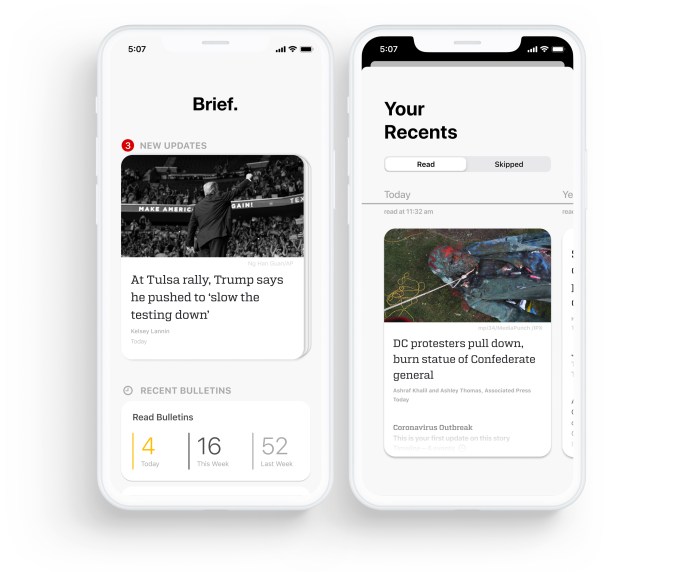 While Brief makes an admirable attempt to solves issues around news consumption and bias, these are not simple problems to solve by technology alone. There are often stories reported accurately by major publications, but those who don’t like the story simply choose to disagree with it.

In addition, for Brief’s app to actually have the impact it desires, it needs to attract a large mass of users. And it has to also figure out how to steer people away from getting their news on social media, where misinformation, disinformation, propaganda, and conspiracies thrive. That’s a far larger challenge — and one which the app doesn’t have a strategy to address. It’s only focused on what Brief itself can do, not on how to bring users to its less algorthimic-driven solution.

But Hobbs believes there’s a market for a news app that steers users away from the drama.

“I think we can do a pretty good job of finding a lot of people who are really tired of having their news come with a side of shouting relatives,” says Hobbs, noting also the app has gained its initial traction just through App Store search ads alone. Before its public debut, Brief made it to No. 12 Magazines & Newspapers on the App Store.

Another issue is that Brief limits its audience by way of its subscription model, which requires a $4.99 per month commitment. Those in most need of a news detox aren’t likely going to pay for the pleasure.

The company is backed by a million seed funding from SignalFire and handful of angel investors, including Sequoia Scouts like David Lieb, Maia Bittner, and Matt Macinnis.

The app itself is a free download on the App Store if you want to take a look, and there’s a waitlist for Android users.