The much-anticipated addition of “Hamilton” seems to have paid off for Disney+. According to new data from app store analytics firm Apptopia, Disney’s streaming service saw a big jump in downloads over the July 4 holiday weekend in the U.S., following the worldwide debut of “Hamilton” on Friday, July 3rd. Between Friday and Sunday, that translated to over half a million new global downloads (752K+) for the Disney+ mobile app, excluding India and Japan. Some 458K+ of those downloads were in the U.S, the firm estimated.

These figures represent a 46.6% increase over the average seen during the previous four weekends in June (Friday through Sunday), Apptopia noted. But the numbers don’t include India or Japan as Disney+ is streamed via Hotstar in the former; and in the latter via a partnership with NTT Docomo through an existing service that later transitioned to Disney+. 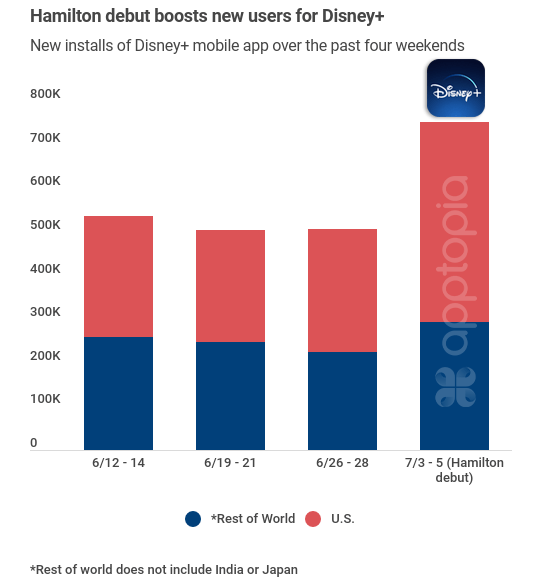 The download figures also represented a 74% increase over the four prior weekends in June, in the U.S, indicating that a significant amount of interest in “Hamilton,” not surprisingly — given its “founding fathers” subject matter — comes from U.S. subscribers.

Rival firm Sensor Tower estimates a slightly different “Hamilton”-related bump for Disney+. During the week of June 29 to July 5, downloads spiked 64% over the week prior, Yahoo reported. Its preliminary estimates for July 3-5 put installs at 1 million across all available markets. 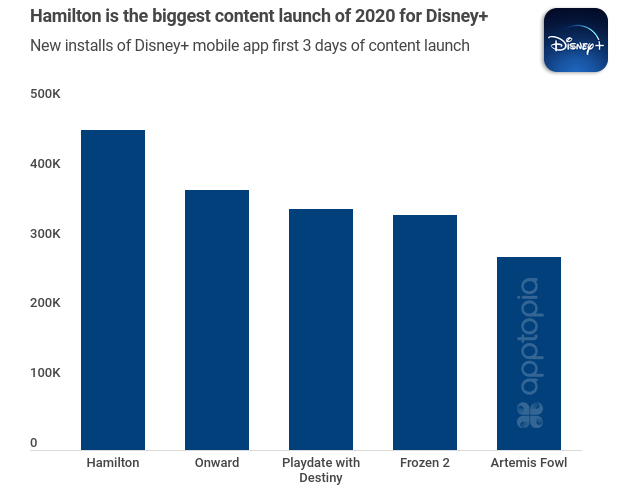 Apptopia also found that “Hamilton” represented the biggest content launch of all of 2020, so far, in terms of downloads. That means it also outpaced the streaming launch of “Frozen 2,” which arrived while consumers were under coronavirus lockdowns. It was also bigger than “Onward,” “Artemis Fowl,” and others, the firm found. 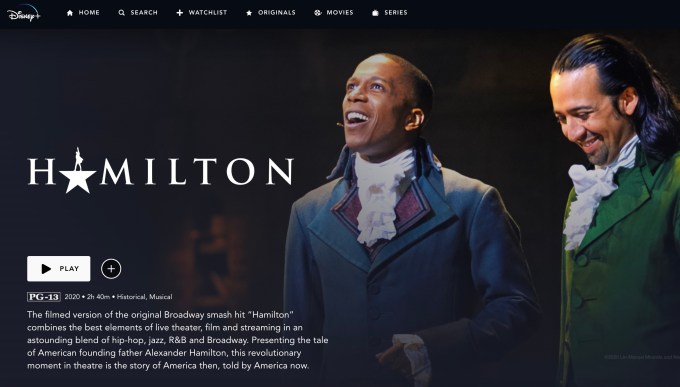 Of course, mobile download numbers don’t provide a full picture of how many signed up just for “Hamilton.” Many of the new Disney+ subscribers likely only signed up via a TV app and have yet to download the mobile companion.

If Roku’s online channel store offered a “top charts” section with rankings, we would have another window into Disney+ popularity given its status as a top streaming device and TV maker in the U.S. But it’s worth pointing out that Roku’s user base has given the Disney+ app a 4.3-star rating across 1,55,006 total reviews. For comparison, Netflix has 3,675,383 reviews — which shows how quickly the still relatively new service Disney+ is gaining on the market leader.

The service appeals to those who follow Disney’s top brands like Star Wars and Marvel, for example, but it’s also found a lot of growth among families who now more than ever need content to keep kids entertained amid the coronavirus outbreak, which has limited families’ usual activities and kept kids indoors.  At the $6.99 per month price point (or $69.99/yr), it’s one of the more affordable streaming services available.

Updated 7/6/20 3 PM ET: Apptopia revised its estimates this afternoon to indicate a larger increase of 74%, not 72.4% as the earlier headline stated. We’ve updated the article with its most recent data as well as the firm’s latest estimates on downloads. We’ll continue to update if newer numbers arrive.