Like it or loathe it, video has proven to be the most engaging of all mediums across the web, and today a company out of Israel called Artlist — which provides royalty-free libraries of music, sound effects and even video itself to enhance video content — is announcing a significant growth round of $48 million, both to continue its expansion, and to build better technology to help navigate users to the perfect clip.

The funding is being led by KKR, with participation also from Elephant Partners, a VC out of Boston that has also backed Allbirds, Scopely and Keelvar among others. This is the first funding that Artlist has ever announced, although Elephant had backed it previously with a undisclosed amount. Ira Belsky — Artlist’s co-CEO who co-founded the company with Itzik Elbaz, Eyal Raz and Assaf Ayalon, and who started out as a filmmaker himself — said the company has mostly been bootstrapped since being founded in 2016. He’s not disclosing the total amount raised to date, nor its valuation except to say that it’s on the rise.

“We have been 100% cash flow positive since the day we started,” he said. “We just want to accelerate growth because there is an opportunity to cater to a wider audience.”

The market gap that Artlist is tackling is a byproduct of how the internet is used and evolving. According to a recent report from Sandvine, video accounts for just under 58% of online traffic globally, with video, social and gaming (with the latter two also being very video-heavy) together accounting for some 80% of traffic.

While some creators may be building their own sound and video content, a large proportion, to speed up production and focus on whatever aspect of their work that they can better individualise and control, will use stock audio and video footage in their work.

Indeed, that also means there are a number of others in this same space, including the likes of Getty, Epidemic Sound, Shutterstock, the platforms themselves that creators use to build and publish their videos, and many others. But Belsky said that in his time as a filmmaker, he found that many of these were not quite what he was looking for himself in terms of connecting him with just the right music that he was looking for. And that was part of the impetus behind building Artlist.

What’s interesting is that Covid-19 has had a double impact on that market.

Not only has there been a huge boost in online video usage as more people are spending more time at home and staying away from public places, but in terms of creators, Belsky notes that many of them have found it harder either to shoot certain kinds of footage, or collaborate with people to create music and other sound effects, all of which has led to a surge of usage for platforms like Artlist.

Artlist’s royalty-free model means that people pay subscription fees to access its sound and video libraries — prices range between $149 and $599 per year, depending on usage and whether you are taking the music, video, sound effects or combined plans — but then nothing more for individual clips.

On the other side of the marketplace, the company does not disclose how much its artists are making from the service, but the basic model sees those payouts vary depending on how much a track is used, and generally they are very competitive.

“Our artists make more from us than they do from other platforms,” Belsky said.

There are no plans to switch that business model to include non-royalty-free, nor outright sales of exclusive rights, he added.

On royalty-free alone, the funding comes on the back of significant growth for the company in the last couple of years, with both users and amount of content being used on exponential growth curves, respectively now standing at 1.1 million subscribers and 25.8 million pieces of content (mostly music at the moment, Belsky said). 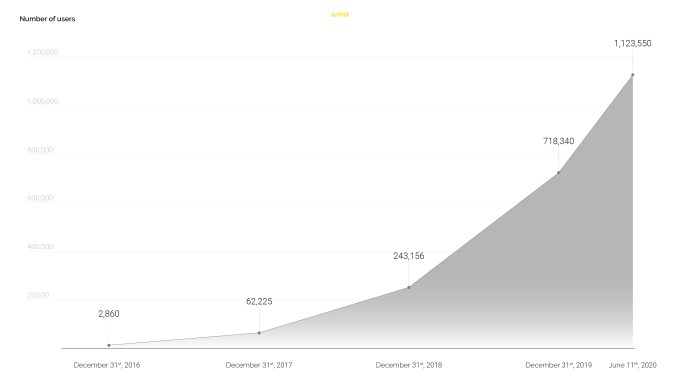 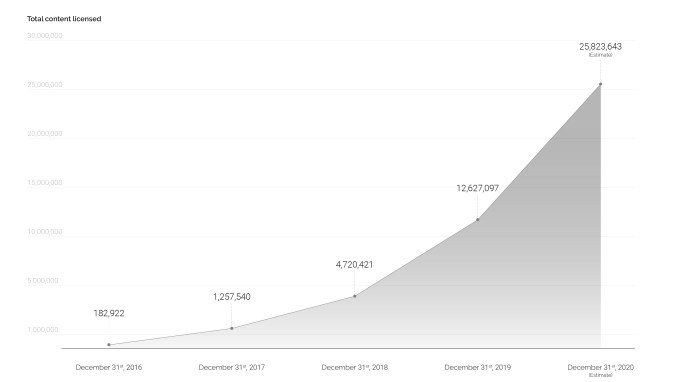 While many users will incorporate one kind of media, either video or music, into a bigger video project — such as this Mercedes Benz commercial that uses Artlist audio — others are looking to see how creative they can be when leaning on both. That speaks to how we might see video continue to evolve as the market matures and yet more videos get produced:

This brings us to the company’s next steps.

Belsky said that while today there are already various taxonomies for searching for just the right piece of content, the plan is to try to make that process easier.

Being based in Israel, the company has been tapping some interesting data science talent, and the country is well-known for producing some of the more interesting startups using AI and all of that is feeding into Artlist’s development, too.

“We want to invest in AI for personalisation,” he said. “We see ourselves in the creative tech space, a combination of content and technology. The aim is to find the best piece of music, but also the best user experience when finding it, to make it fast and intuitive.”

One experiment has involved people uploading examples of what they’d like, and Artlist searching for “matches” in its own catalogue, and there are others to come, he said. Indeed, given what we’ve seen with the advances in semantic search and computer vision, there is a potentially very interesting opportunity to start to explore how to, for example, ingest a video clip to try to match the mood of a piece of audio to it. This is not something that the company is exploring today, but it points to the potential it and others in the category might consider down the line.

Meanwhile, given Artlist’s traction and revenue growth, the opportunities and the needs of creators today are big enough to make this an interesting bet, despite the stiff competition.

“The growth of digital content creation – and the evolving way in which it is consumed – has generated a tremendous amount of opportunities for creators, but the process of licensing digital assets remains a significant challenge for small and large creators alike,” said Patrick Devine, a member of KKR’s Next Generation Technology Growth investment team, in a statement. “What impresses us most about Artlist is the management team’s dedication to helping creators focus on what they do best and removing friction from the process of discovering and accessing content.”