A new startup called Capsule has launched a new way for brands to create original video content with their community in the form of Q&As. But unlike a simple Instagram story’s Q&A session, Capsule provides a full platform for designing the Q&A session, branding the content, curating the responses from users and tracking the resulting data. But the most notable feature is Capsule’s automated editing process that adds branding, effects and music to the final product, allowing brands to skip the post-production process and more quickly publish their video.

The product comes from the same team behind the animated GIF capture tool and social network Phhhoto, which eventually lost out to Instagram’s clone, Boomerang. Following Phhhoto’s shutdown in late 2017, the team pivoted to an experiential marketing business, Hypno, that provided photo booths, plus other camera platforms and interactive experiences, for live events, retail and attractions.

The idea for the new startup directly emerged from the challenges now facing Hypno in the face of the COVID-19 pandemic.

“Capsule was born out of the need for some of our events and live experiences customers to figure out a way to activate their audiences because they couldn’t do it in real life,” explains co-founder Champ Bennett. “The Hypno business pretty much dried up in terms of its opportunities as soon as the pandemic hit,” he says.

The team refocused its efforts on the new software platform instead, and received an immediate, overwhelming response from its existing customers. It also quickly added new ones — including those outside the live events space.

In the two months following its MVP launch, Capsule has been generating revenue from its now 35,000 users, including some big-name customers like Netflix, Samsung, Chicago Bulls and a handful of colleges and universities that wanted to create solutions for virtual graduations. Consumers, meanwhile, have also used the product for virtual birthdays, weddings and baby showers.

The platform itself works something like a Squarespace for the video Q&A format.

To use Capsule, the brand will first pick a template that it can customize to match its current campaign by changing the logos, colors, buttons, backgrounds and URLs. 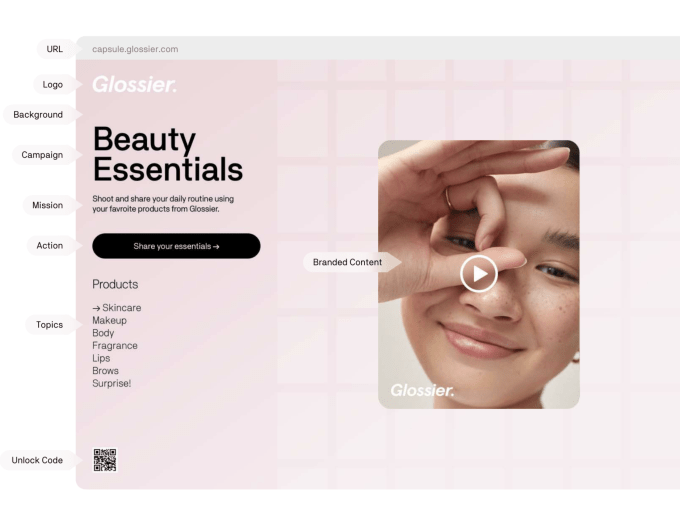 They then choose their own questions and prompts designed to get their customers/users/community members talking.

To respond, users visit the Capsule URL — which can be a custom domain for an extra fee — to record and upload videos via their phone or laptop. These videos can only be a max of 60 seconds in length to keep the content short and snappy.

Brands can curate the responses they want to use in the resulting product, aka the “capsule.” They’ll also have access to the raw video footage for use elsewhere on social media, if needed.

Capsule’s best trick is that it instantly and automatically processes the video, adding music, lower-third graphics and a preroll and a post-roll, so the video looks professionally edited.

“It makes everybody look a little better than what they would normally look like if they were just recording right from their phone — which generally looks pretty raw and unedited,” explains Bennett. “That editing feature is the magic of that whole thing, as it makes it feel really special.”

The automated editing involves a scripting language the Capsule team created, which includes a set of instructions on how to process a given video. Capsule’s customers simply select the “type” of video they want, and Capsule does the rest.

“One might be really energetic, with flashing graphics and pumping music. And one might be a little bit more somber and may have an acoustic guitar playing behind it,” Bennett notes. “Ultimately, what will happen is when you create a Capsule, you’ll be able to pick that that feel.”

Right now, Capsule offers 10 of these “templates,” but is working to have around 50 available within the next couple of months.

Depending on the type of solution a brand needs, Capsule’s service can cost anywhere from $10 per month to as much as $20,000 per year. It currently works via the web and mobile web, but Capsule is developing an iPhone app that will allow the capture of higher-quality video.

While the original focus was to create a new engagement platform for brands that have lost the ability to host live events, the range of post-COVID use cases is continuing to grow. Netflix, for example, ran a focus group using Capsule to ask questions and get video, instead of written responses from viewers. Will Ferrell used Capsule to leave a video message for graduates. Media company OkayAfrica’s community used Capsule to talk about the impacts of the COVID-19 crisis, organized in thematic sections.

Bennett says the company is also thinking about how Capsule can be used to provide a platform for people’s voices who may not otherwise be heard.

Following its launch, it’s clear Capsule became a more flexible format than perhaps originally envisioned. But to what extent customers’ usage will change over time remains less certain. If a coronavirus vaccine is developed, for example, the need for video to stand in for live events may not be as in demand as it is now, for example. Of course, no one knows when that time will come at this point.

In addition to Bennett, Capsule’s co-founders include Russell Armand and Joseph Jorgensen, also of Phhhoto and Hypno. The company is planning to spin out Capsule from Hypno and is already receiving inbound interest from investors. Capsule has not closed a seed round at this time.