Facebook is testing a new feature that aims to keep users inside its platform when they’re looking for factual information they would otherwise turn to Google or Wikipedia to find. The company confirmed to TechCrunch it’s now piloting an updated version of Facebook Search that displays factual information when users search for topics like public figures, places and interests — like movies and TV shows.

For example, if you type in a movie title in the Facebook search bar, you’ll be shown an information box that gives you all the details about the movie.

The information is gathered from publicly available data, including Wikipedia. But instead of requiring users to click out of Facebook to view the information, it’s displayed in a side panel next to the search results. This is similar to the automatically generated Knowledge Panel format Google uses for these same types of searches.

SocialMediaToday was the first to report the news of the pilot, citing posts from Twitter users like JC Van Zijl, Matt Navarra and Giulio S.

Facebook confirmed with TechCrunch the feature is a pilot program that’s currently running in English on iOS, desktop and mobile web. (Users may or may not see the information panels themselves, as this is still a test.) 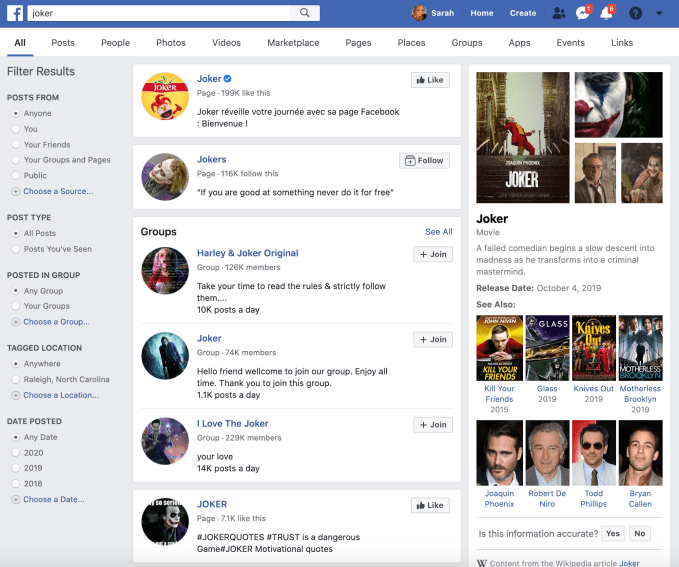 We’ve found the new feature can be fairly hit or miss, however.

For starters, it doesn’t always recognize a search term as a proper title. A search for “joker,” for instance displayed a Wikipedia-powered information box for the movie. But a search for “parasite” failed to do so for the Oscar-winning title that in 2020 became the first non-English film to win Best Picture.

Meanwhile, a search for “Donald Trump” easily returned an information panel for the U.S. president, but information for many members of his cabinet did not come up when they were searched by name. Information about leading coronavirus expert Dr. Anthony Fauci came up in a side panel when the term “anthony fauci” was entered in the Facebook’s search box, but not when “dr. fauci” was used as the search query. 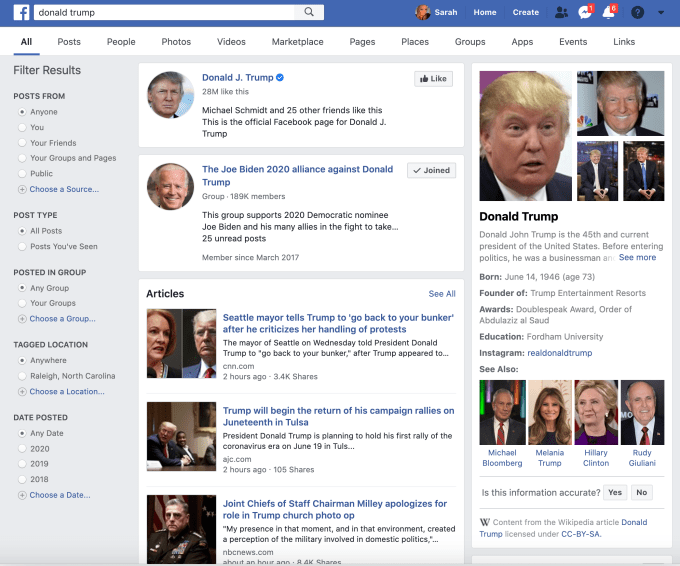 Google’s Knowledge Panel doesn’t experience these same problems, as it’s able to make intuitive leaps about which person, place or thing the user is likely searching for at the time of their query.

Facebook Search will also direct users toward its own features when doing so is more beneficial, it appears. For instance, a search for “covid” or “covid-19” will return Facebook’s own COVID-19 Information Center at the top of the search results, not a data-powered side panel about the disease. Google, by comparison, returns a coronavirus map, cases overview and CDC information in its Knowledge Panel.

And a search for the popular game “Animal Crossing” returns its Facebook Page and the option to add it to the titles you’re tracking on Facebook Gaming, but no information panel.

In other words, don’t expect to see an information panel for all the persons, places, or things you search for on Facebook at this time.

The update follows the closure of Facebook’s previous Graph Search feature. Years ago, Facebook attempted to reinvent its search engine with the launch of Graph Search, which allowed users to find people, places, photos and interests using Facebook data. The feature was later shut down as Facebook dealt with the backlash from major security lapses, like the Cambridge Analytica scandal. Doing so hampered investigators’ ability to catch criminals and other bad actors, BuzzFeed News noted at the time.

Last year, Facebook also told Vice it was pausing some aspects of Graph Search to focus on improvements to keyword search instead.

Presenting “factual” information in the sidebar could also help Facebook claim it’s addressing concerns around the spread of misinformation on its platform. As a home for active disinformation campaigns, propaganda, and conspiracy theories, Facebook needs a tool that displays fact-checked, factual information. (There was a time when Wikipedia wasn’t considered a valid source of that kind of information, but we’re long past that point now!)

This isn’t the first time Facebook has tapped Wikipedia data to enhance its service. It used Wikipedia information on its community pages over a decade ago, for example.

Facebook didn’t offer additional details regarding how long it plans to test the new search feature or when it expects it to roll out more broadly.