Starbucks announced today it will expedite the rollout of its new “Pickup” store concept, powered by mobile ordering, in response to the coronavirus pandemic. It will also expand access to curbside pickup, drive-thru and walk-up counters in less dense, suburban markets, the company said. These changes aren’t going to arrive as new additions to Starbucks’ existing store lineup, however. Instead, the company said it will close up to 400 company-owned stores in the U.S. and Canada over the next 18 months, as it rolls out the new format stores and makes other changes.

These changes will ultimately result in “net” new store growth in fiscal 2021 but will come with a moderate impact to Starbucks’ Americas revenue, the company says.

A large part of the restructuring plan is to shutter more of Starbucks’ traditional cafe-like locations in favor of new formats that better cater to convenience orders, not sitting around with friends. One of these is the Starbucks Pickup store concept.

Ahead of the COVID-19 crisis, Starbucks had been testing the Pickup store concept on a small scale. In the last seven months, the company opened and had been operating two of these stores — one at Penn Plaza in Manhattan and another in Toronto’s Commerce Court. Both have offered the company early insights into how to design the pickup-store experience for both employees and customers. 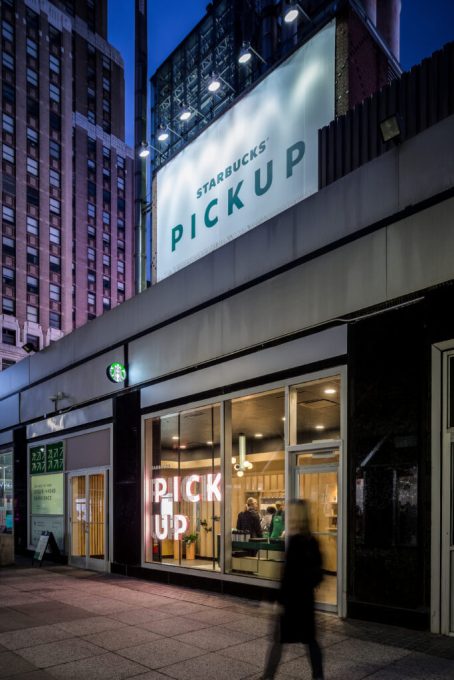 Originally, Starbucks had planned a steady rollout of these Pickup stores across the U.S. in response to what it saw in terms of changing customer behavior. Before COVID-19, for example, Starbucks found that approximately 80% of U.S. transactions in its company-operated stores were for “on-the-go” orders.

In light of that data, Starbucks had been working to better meet these customers’ needs through changes like store remodels that emphasized pickup counters and even new store launches.

The pandemic has forced Starbucks to speed up its plans with regard to the rollout of its mobile ordering-powered Pickup stores as its traditional cafe business suffered. The company has been impacted by government lockdowns for businesses, shelter-in-place orders, as well as the increased number of companies allowing employees to work from home. Presumably, the latter has led to a reduction in the number of commuters who swing by Starbucks on their way into the office — that’s a metric that may never fully rebound, as work-from-home becomes more commonplace.

Pickup stores won’t solve all these issues, but they will make it more convenient to grab an order while social distancing. But Starbucks’ investment in this pickup format is an indication that the company believes things won’t bounce back to normal even when the COVID-19 pandemic passes — perhaps one day by way of a vaccine, for instance. Instead, mobile ordering with pickup will become a large part of the “new normal.”

“We are now envisioning the accelerated development of Starbucks Pickup stores in major U.S. cities over the next 18 months, including retrofitting and repositioning many existing cafes to expand our store portfolio with a mix of appropriate store formats,” the company noted in an SEC filing. “This acceleration of our strategy requires that we assess our existing store portfolio with respect to renovations, relocations, and closures.”

In the near term, Starbucks plans to expand Pickup stores in New York, Chicago, Seattle and San Francisco.

Its vision is for each large U.S. city to have a mix of both traditional Starbucks cafes and Starbucks Pickup locations that are located within walking distance of one another. This will help to reduce crowding in the cafe locations and aid with social distancing, the company notes, as it shifts more of the “on-the-go” customers to another location.

Also in response to COVID-19, Starbucks says it will renovate select store layouts to include a separate pickup counter for mobile orders at high volume stores, making it easier for customers and delivery couriers to grab their orders.

In addition, Starbucks says it will increase the number of locations offering curbside pickup, where customers order ahead and pay with the app. Some locations will participate in a pilot test of curbside-only store formats, as well.

Access to drive-thrus will be expanded, too, with the opening of new locations outside of densely populated cities. Starbucks says it may test other new concepts in drive-thru, like double lanes or combinations of drive-thru and curbside.

“Starbucks stores have always been known as the ’third place,’ a welcoming place outside of our home and work where we connect over a cup of coffee,” said Starbucks CEO Kevin Johnson, in a statement. “As we navigate through the COVID-19 crisis, we are accelerating our store transformation plans to address the realities of the current situation, while still providing a safe, familiar and convenient experience for our customers,” he added.

In China, comparable store sales versus the prior year declined 21% in May, an improvement from a decline of 32% in April. Shares of Starbucks were down 4.8% as of the time of publication.