Mobile safety app Parachute is today rolling out a new feature that will prevent an unauthorized person who grabs your iPhone to stop it from recording live video, even if they attempt to turn off the phone entirely. The timely update arrives amid the nationwide George Floyd protests against police brutality and the systemic racism present in the American justice system.

Bystander video of Floyd’s death triggered the demonstrations and protests, and video has continued to serve as key documentation of those events.

The Parachute app, which first launched at TechCrunch Disrupt 2015 as “Witness,” has long described itself as a panic button for the smartphone age. The app is intended to alert your emergency contacts when you’re in trouble — by simultaneously calling, texting and emailing and by sending them your live video, audio and location straight from your current location.

The app also has an option that allows users to record discreetly by blacking out the screen so it doesn’t show that live video is being recorded. Plus, Parachute records simultaneously from both cameras to increase the chance of getting the incident on film. The video is pushed out from the phone to Parachute’s platform and the evidence of the video is erased from the phone. In addition to the link sent to your emergency contacts, users can also later download the video from the link they’re emailed directly.

Despite its unique functionality, the app has gained only a small following in the years since its launch. According to data from app intelligence firm Sensor Tower, Parachute has not topped 100,000 downloads on the U.S. App Store. It also doesn’t currently rank on the App Store’s charts.

Parachute declined to provide user numbers, but noted its app has seen higher activity this past week in the U.S. and in Hong Kong.

Its new feature, known as Superlock, is an attempt to regain interest in Parachute’s video recording feature set. 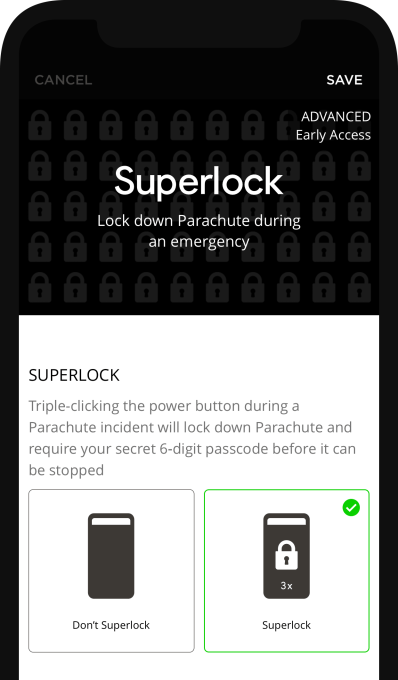 Superlock works in tandem with Apple’s Guided Access to lock down the user’s phone. Parachute explains how to set up Guided Access via an in-app tutorial. The process involves heading to the iPhone’s Settings area, then going to the Guided Access section under Accessibility and toggling the switch so it’s on.

Afterward, you return to the app and triple-click the power button and tap on the “Start” button at the top right of the screen to select a six-digit passcode. This is the passcode that will have to be entered to stop Parachute from recording video in the future. You then triple-click the iPhone power button again, enter the passcode you just created again, and tap the “End” button on the top left.

When setup is complete, you can put Parachute in Superlock mode at any time by triple-clicking the power button.

The app will keep recording the video and lock down your iPhone until the power button is triple-clicked and the passcode is re-entered.

This process cuts off access to the “X” button that typically displays to end a recording incident in the app. It also prevents anyone else who gains possession of your phone from shutting off the video themselves.

The company explains that even if your phone runs out of battery, crashes or experiences a hard reboot, the Superlock feature can be configured to resume recording upon reboot. And Superlock can work with the feature that disables the video preview, so no one knows your phone is recording.

Parachute can also run in the background as you switch and use other apps, the company adds.

In the case that the unauthorized user tries to guess your passcode, an increasing time-delay mechanism will prevent them from trying too many combinations quickly — similar to how the iPhone stops people from having the chance to quickly try different passcodes.

The company’s business model allows for the storage of incidents that expire three months after being created. A full membership is $9.99/month for unlimited devices, contacts, alerts, incidents and storage. An affordable $2.99 per year “Lite” membership is also available. Parachute has not taken VC funding.

The update is live today on iPhone.