Houseparty, the video chat app that’s seen a surge of growth during quarantine, is preparing to expand its service in a new direction: co-watching live video with friends. The company on Friday will launch its first experiential event series called In the House, which will feature more than 40 celebrities who will dance, talk, cook, sing, workout and more, over the course of three days.

Viewers of the event will be able to sing and dance with Alicia Keys and DaBaby; cook with Bad Bunny, José Andrés and Christina Tosi; work out with Cam Newton and Terry Crews; and dance with Derek Hough and Addison Rae, for example.

The event will run from Friday, May 15 through Sunday, May 17 directly in the Houseparty app. To join in, you open the app when the content is live. Once there, you’ll see a billboard for the show that’s currently airing. This billboard will appear 30 minutes before each broadcast so you can subscribe to the event and receive a push notification when the show starts. 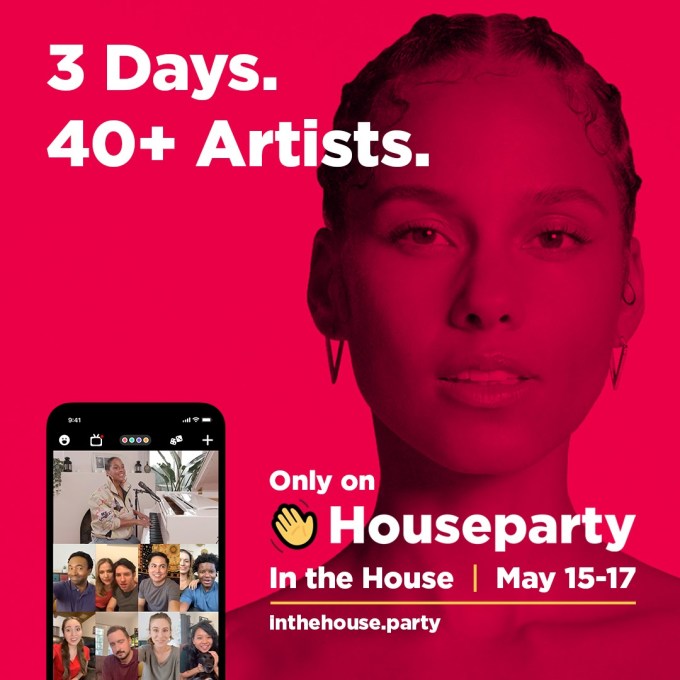 These live streams are not meant to be watched alone like other live videos often are — where users can only participate by typing in group chats or sending virtual likes. Instead, the idea is to join your friends on Houseparty in a group video chat, as usual, then tune into the live content and watch together.

This live, co-watching experience is made possible thanks to Houseparty’s newly launched video player. The player is designed to sit on your screen but not cover up your friends’ faces, allowing you to watch and chat at the same time.

When the live show is over, it will only re-air once, exactly 12 hours after the original show time. Then, it’s gone forever.

Houseparty soft-launched the video player last week when it hosted a virtual prom experience with D-Nice. But that was more of a test run ahead of this much larger and longer live event.

#HousepartyProm continues with @djdnice
starting right now! Pull his set into your room on @houseparty by tapping the TV icon at the top of the screen and hitting the 'watch' button. Let's dance the night away! pic.twitter.com/ierjkepvxJ

The company doesn’t see this weekend’s virtual celeb party as a one-off event, however. Instead, Houseparty sees this as the first of many live co-watching experiences still to come.

“While many entertainers have turned to performing online during these unprecedented times, this event is different from anything that has happened in the past few months. This is not just another virtual music festival — this weekend’s lineup is a curation of shared experiences: cooking demos, comedy shows, fitness secrets, dance parties, sing-a-longs and more,” Houseparty spokesperson Kimberly Baumgarten told TechCrunch.

“Now that we have this live player it allows us to create more interactive experiences for our users to enjoy together in the future. This content will be additive to the Houseparty video chat experience for our users,” she said.

Watching video together is an activity that’s been booming during quarantine, as friends binge Netflix together through extensions like Netflix Party or join Twitch “Watch Parties.” Shared experiences, like tuning into virtual concerts or DJ sets on Instagram Live, are popular, too. (If only Google hadn’t shut down its experimental Uptime app for YouTube co-viewing! Darn!)

By focusing on co-watching within group video chats, Houseparty is in closer competition with Instagram, which just this March introduced co-watching of feed photos and videos. But Houseparty is offering planned and scheduled experiences — allowing users to coordinate when they’ll join each other in the app, instead of leaving it up to chance.

Quarantine may have rushed this co-watching video technology into development and adoption. But it seems the next step for our high-speed connections was not just to “go live” in order to be watched, but the creation of a world where everyone goes live together — whether performer or viewer.