The company has been steadily working to make YouTube Music its default music service, in order to eventually replace Google Play Music. Last year, for example, Google shut down the Google Play Artist Hub and began preinstalling YouTube Music on Android smartphones. It said at the time those moves were part of its broader strategy to merge the two services.

Now we have a deadline of sorts for Google Play Music’s end-of-life — sometime later this year, according to Google’s announcement.

One challenge in this transition was the ability for Google Play users to retain their personalization preferences, library and playlists from Google Play Music, when moving to the new service. Most users did not relish the idea of starting from scratch after building up years of history on Google Play Music.

On YouTube Music, users will be able to now click on a “transfer” button on iOS and Android to start the transfer of their uploads, purchases, added songs and albums, personal and subscribed playlists, likes and dislikes, curated stations and personal taste preferences.

Following the transfer, users will immediately see an updated YouTube Music home screen reflecting the impact of this new data on their personalized recommendations. YouTube Music will also email users when the transfer is complete and their music has been fully added to the in-app “Library” tab. 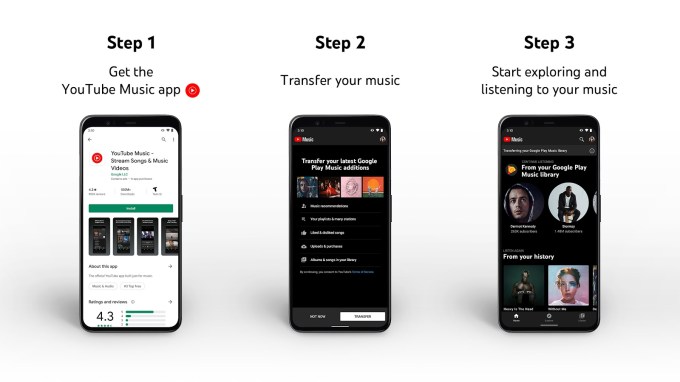 Current customers will be alerted to the transfer option via an email that includes more detailed instructions.

Google also addressed Google Play Music user feedback by rolling out new features to YouTube Music aimed at making its newer service more compatible (in terms of feature set) with the older one.

It recently added increased playlist length (from 1,000 to 5,000 songs), support for uploads (up to 100,000 tracks — which is 50,000 more compared with Google Play Music), offline listening, lyrics and an Explore tab for discovering new music, playlists and genres.

In addition, podcast listeners are able to visit a webpage (http://podcasts.google.com/transfer) to transfer their subscriptions and episode progress to Google Podcasts with a single click. The Google Podcasts app, like YouTube Music, will serve as Google’s default podcast listening experience, similar to how Apple’s Podcasts is its own dedicated app for audio programs.

In part, YouTube Music’s struggles are due to the fact that Google is operating two separate music services, splitting its customer base. When Google Play Music fully shuts down, that could change.

YouTube Music is being offered at the same $9.99 per month subscription price as Google Play Music, which includes on-demand streaming, background listening, offline access and an ad-free experience. For $11.99 per month, users can extend that experience to YouTube by way of YouTube Premium.

Google didn’t provide an exact date for the shutdown of Google Play Music.

“For now, users will continue to have access to both services,” the company said. “We want to ensure everyone has time to transfer their content and get used to YouTube Music, so we’ll provide plenty of notice ahead of users no longer having access to Google Play Music later this year.”