As part of its anti-bullying efforts, Instagram today announced a series of new features aimed at helping users better manage negative comments as well as highlight positive ones. It’s also adding new controls to manage who can tag or mention you on Instagram, which can be another source of online bullying.

The first of the new features for managing negative comments is specifically aimed at those who own or help run Instagram accounts with a large following. Being able to manage a surge of negative comments on these accounts can be difficult — especially in the case of a post that’s gone viral or a coordinated attack from online trolls or bots.

Instagram has been testing a new feature that allows account holders to delete comments in bulk and restrict multiple accounts that post negative comments. This could effectively silence those who regularly stalk high-profile accounts with the main goal of leaving negative or trolling remarks. The company says the early feedback from its tests has been encouraging, so it’s opening up the feature to Instagram users on mobile.

On iOS, you can tap on a comment, then the dotted icon in the top-right corner where you’ll choose “Manage Comments.” This will allow you to choose up to 25 comments to delete at once. If you tap “More Options,” you’ll also find a feature that lets you block or restrict commenters’ accounts in bulk. On Android, you’ll instead press and hold on a comment, then tap the dotted icon, and select Block or Restrict.

Another new feature, Pinned Comments, will soon launch as a test.

The idea here is to give Instagram users a way to amplify positive comments. This can help set the tone for the community and encourage more positive interactions, as a result. When the feature goes live, users will be able to select and pin a number of comments to the top of their comments thread, where they’re more easily seen.

While these features will put account owners in better control over their community, they may also have the effect of silencing valid criticism or any comments the poster simply doesn’t like. Twitter, by comparison, offers a way for users to hide replies they don’t like — but it doesn’t remove them from its platform. Instead, the replies are hidden behind an extra click, keeping them visible to anyone who knows where to look.

Instagram is also now rolling out a set of expanded controls that allow you to choose who’s allowed to mention or tag you in comments, captions or Stories. You’ll be able to select from “Everyone,” “Only People You Follow” or “No One,” for both tags and mentions. In addition, you’ll be able to toggle on or off an option that gives you the ability to manually approve tags. 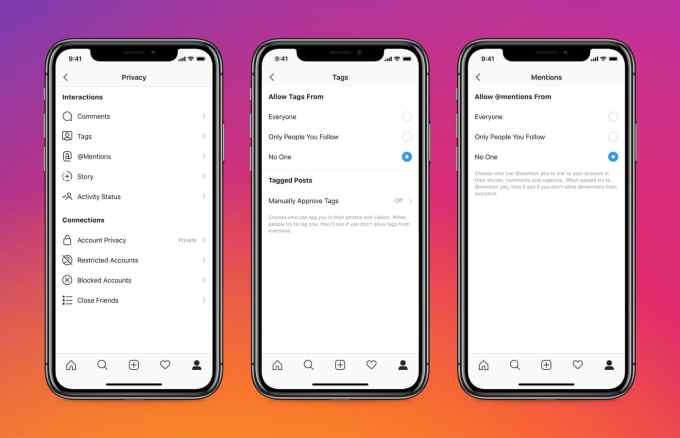 The launch of the trio of new features comes alongside Facebook’s fifth edition of its Community Standards Enforcement Report, which details how well the company has been able to enforce its policies across its suite of apps.

For the first time, the report shared enforcement data for bullying on Instagram, noting that it took action on 1.5 million pieces of content in both Q4 2019 and Q1 2020.

The company also made improvements to its text and image matching technology to find more suicide and self-injury content on Instagram, it said. As a result, it increased the action on this content by 40% and increased its proactive detection rate by more than 12 points since its last report. The technology used to find and remove child nudity and sexual exploitative content was improved across both Facebook and Instagram, as well.