Optimization. Efficiency. Data-driven decisions. If I had a nickel for every time I hear these words from founders I’d be long retired.

And yet, the process involved in achieving resource optimization, efficiency and making truly data-driven decisions is laborious to say the least, and usually involves an immense amount of talent and resources.

And then there was nextmv.

The YC-backed company, led by Carolyn Mooney and Ryan O’Neil, recently raised a $2.7 million seed round from FirstMark Capital and Dynamo, with participation from XFactor, Atypical and 2048. The premise is to provide developer-friendly building blocks for optimizing decision models and testing them, with a specific focus on the logistics operations industry.

“This is very much a democratization play,” said Matt Turck, who led the deal for FirstMark. “The business world is full of optimization problems, but Operations Research has been a somewhat dusty corner, where you needed PhDs in math to operate expensive software, and talent is even rarer than in data science. Nextmv’s vision is that, if you abstract away the complexity, and offer optimization and simulation as a developer tool that plays nice with modern software architecture and integrates with ML/AI, you unlock a big opportunity across a number of verticals and use cases (a la Stripe, Twilio, Plaid and similar plays).”

Mooney and O’Neil hail from GrubHub, where they led a team that grew to 40 people, building out simulations for GrubHub to test and optimize their decision models around delivery. Before GrubHub, Mooney developed simulations for Lockheed Martin. If it sounds complicated, that’s because it is. And that’s kind of the point. 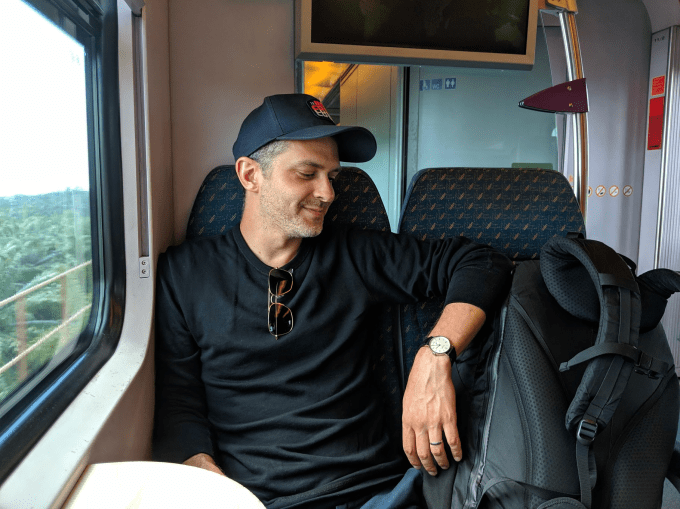 When a startup (or big corp) runs a logistics operation, they build out decision-making models about how that business function.

The founders saw this first hand at GrubHub but the same scenario plays out any any logistics business.

To automate operations, a company may say that the driver closest to the restaurant should deliver the food. They may then add a stipulation that there is a high likelihood another nearby restaurant may receive an order with a certain timeframe, so that driver should wait five minutes to pick up another order before heading out to delivery. These rules may change based on time of day, or geography, or hundreds of other factors. Eventually, this decision model becomes incredibly complicated, particularly at scale.

How does the company know whether these rules are the best possible combination of objectives for their operation, and whether or not they optimize the top-line goals of the business, whether it be increased margins, customer satisfaction, etc.?

Nextmv developed Hop to allow businesses to optimize their decision models, ensuring that the combination of business rules involved in their operation is as aligned as it can possibly be with their overall goals and value proposition. It allows developers to look at all the different configurations of business rules possible, and find the right combination that fits their problem.

While the business rules are the company’s IP, the solver that looks at those millions of configurations and helps find the best one are nextmv’s IP.

“You shouldn’t have to create a solver because that’s not core to your value proposition to your customers,” said Mooney. “Grubhub doesn’t need to go make a solver that generates all of these scenarios and searches them really fast. They would basically have to dedicate a core set of engineers to manage that full time. And in no way, shape or form does that provide value to their diners or their restaurants.”

This serverless technology comes with templates that allow developers to plug and play business rules to optimize their own models.

Alongside Hop, nextmv has also developed a product called Dash. Dash is a simulation framework that lets developers test their models in a real-world situation without the same real-world costs. Essentially, developers can test their decision models just like they test the software itself.

Mooney used Uber as an example. If Uber were to make an algorithm change, the only safe way to test that change would be to build a simulation of the real world and let the algo run free in that simulation. Again, building simulations isn’t core to Uber’s business or value proposition. The other option is to test that new algorithm in the real world. The cost associated with something going wrong — let’s say that every Uber took 10 minutes instead of three minutes to arrive to their rider with the new algorithm — can be incredibly high.

Dash allows Uber, or any other business, to test their decision-making algorithms using real-world data without the real-world costs associated.

Nextmv charges on a per-seat basis but is not yet sharing pricing publicly.

“Our greatest challenge is actually one of our differentiating factors at the same time,” said Mooney. “And that’s usability. We’re really aiming for usability that is at a very high bar because developers have a very high bar. We’ve made some great strides on that front, but I think that will continue to be a challenge for us to meet and raise that bar over time.”

Mooney added that, while this platform is currently optimized for developers, systems engineers and data scientists, she envisions a future where this could become a low-code or no-code tool for anyone within an organization to fiddle around with business rules and test them.

This latest round brings the company’s total funding to $3.4 million.