Founder and CEO Lara Vandenberg told me she created Publicist to support the ways in which the communications and marketing industry is changing — changes that are only accelerating due to COVID-19.

Vandenberg was previously senior vice president of communications and marketing at Knotch, and she told me, “More companies now are being better served by this flexible support, rather than being tied to these costly and rigid agency retainers.”

“As we’ve seen, more brands are continuing to downsize their internal teams, so a lot of people coming to the platform have either been furloughed or laid off,” she said. “This is really, really premium talent. I always believed that the industry was moving to project-based work.”

So she built an early version of Publicist while at Knotch, then left to focus on it full time. She launched a beta test earlier this year before the full launch this week. 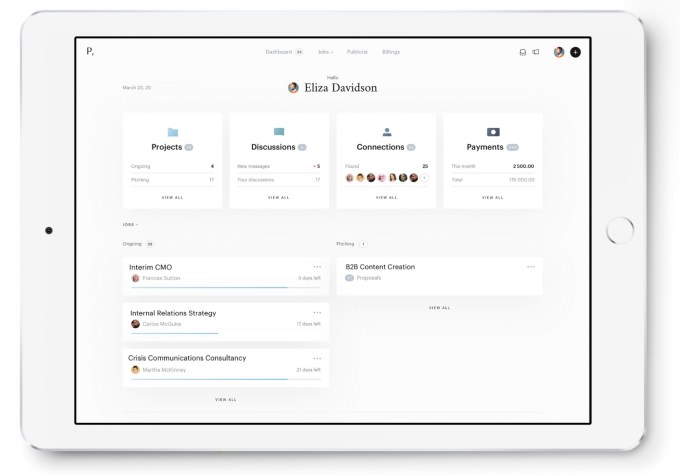 The goal is to help businesses find and hire freelancers for work like content creation, crisis communications, developing a go-to-market strategy or even hiring an interim CMO. Vandenberg said Publicist vets all the talent on the platform, and that those freelancers have worked for brands like Apple, Nike, Microsoft, IBM, Away, Glossier, Casper and Google.

“We have 350 skills on the platform, and I would say only about 10% of those are PR-related,” she added.

And Publicist isn’t just for establishing the initial connection between company and freelancer. It’s designed to enable the full collaboration process, with tools like video chat and screensharing — then the startup takes a 20% commission on payments.

Publicist is starting in North America, with plans to expand globally. Vandenberg suggested that some jobs (like crisis comms) probably require someone with local, on-the-ground knowledge, while others (like Amazon or Shopify marketing) are more geography agnostic.