Modern Games is a new studio working to create games that combine physical and digital play.

The company was founded by husband-and-wife team Justin and Amanda Kifer — serial entrepreneurs who previously launched companies including Citizen Local (acquired by MyLife in 2011) and Fidgetly, a fidget spinner company that also created a motion controller for iOS and Android games.

It sounds like the Kifers have a number of new titles in development, but the company is announcing today that it has acquired and is relaunching an existing game, Beasts of Balance.

The game was first released by Sensible Object in 2016. As demonstrated for me by Justin Kifer (the startup’s CEO), Beasts of Balance involves stacking physical animal pieces, while also scanning them into a companion app that keeps score and brings their fantastical skills to life. The basic game costs $99 (currently on sale for $79), and players can purchase expansion packs to get additional accessories, beasts and other “artefacts.”

The other Modern Games titles released this year will be purely physical board and card games, released under its Modern Games [Analog] brand. Kifer told me that the company’s big “flagship” launch is planned for 2021, with a mobile game that involves augmented reality and connected objects, and that takes place in a rich science fiction/fantasy world. In fact, Kifer’s even writing a series of young adult novels to flesh out the setting.

“I want people to think of Modern Games as a studio that is working hard every day push the boundaries what it is to play a game,” he said. 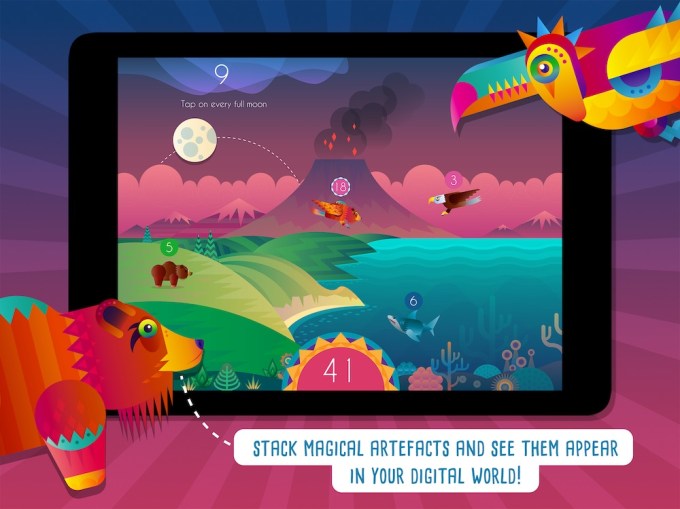 Kifer suggested that by combining physical and digital gameplay, Modern Games’ titles will have the real-world social component of a traditional tabletop game while taking advantage of gameplay that’s also possible digitally.

Kifer also said that by always starting with a core physical product that players need to buy, the company can avoid having to go the free-to-play route adopted by most mobile games. At the same time, he also emphasized that the company will keep the games relatively affordable, with a sub-$40 price for core products. (There were will be additional monetization through physical and digital add-ons.)

On the other hand, our remote demo made it clear that there’s a downside to relying on a physical products — since we weren’t in the same room (and, given COVID-19, are unlikely to be anytime soon), Kifer and I couldn’t actually play the game together.

“The games that we’re working on right now are also multi-player,” Kifer said when I pointed this out. “They’re games that could be played in proximity to other others, but they don’t have to be. For us, it’s all about bringing people together in ways that are inherently social, but it doesn’t necessarily mean physically co-located.”