Google Meet — the video call service formerly known as Hangouts Meet, which itself was an offshoot from Hangouts, not to be confused with Google Chat, Duo, Allo or any of the company’s other communications products — is finally making its debut on Gmail accounts, where it probably should have been since 2010.

Everyone with a Google account has access to Meet as of a few days ago, when Google removed most of the restrictions that made the product a go-to for many business customers but a non-starter for everyone else.

As they announced then, anyone with a Google account can make calls with up to 100 people, for up to an hour. The option to do so will appear on the sidebar, where one can start a meeting and invite participants in a pop-up browser window — it’s quite fast and a dial-in and PIN are provided immediately — or join an existing meeting using a code. 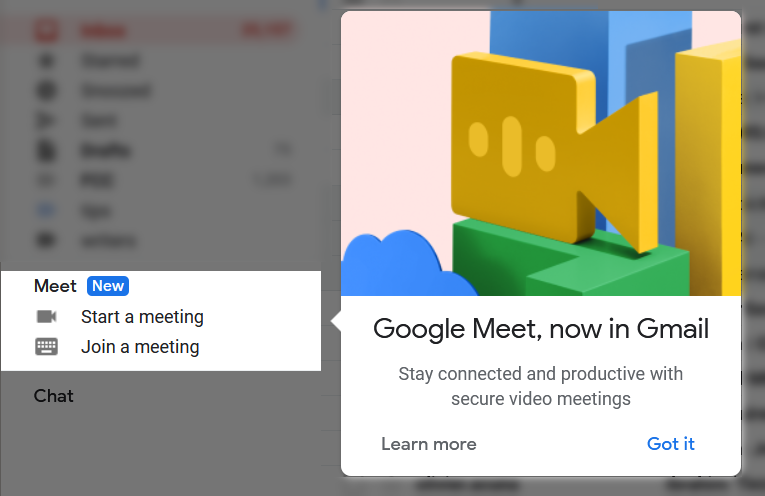 It’s a welcome improvement, to be sure. But it’s also something that on reflection one wonders why Google hasn’t had there for years.

Despite running one of the world’s largest communications platforms and owning its most popular operating system, person to person communication has always been something of a puzzler for Google. Every couple of years the company debuts a new and ill-advised app or service that’s confusingly branded, competes with its existing offerings and isn’t even available for most people to use. Sometimes they even do two at once!

This experimental approach (unsuccessfully aping the old, weird Google) wasn’t a problem when the only pressure was the usual trickle of enterprise and startup innovations that Google could easily bat down from its high seat. But the coronavirus pandemic produced a tsunami of demand for video calling that suddenly threw the competition into gear.

As we have seen, Zoom emerged as the dark-horse winner, despite serious security issues and other general murkiness.

Maybe we shouldn’t use Zoom after all

The secret was, of course, simplicity: one or two clicks and it “just works.” While Microsoft, Google, Facebook and other major tech companies have seen huge gains, and startup efforts like Houseparty and Discord have also spiked, Zoom’s ubiquity is such that people speak of “doing a Zoom call on Google” or “we can do a Zoom meeting on Skype.” It’s the ultimate insult.

As a strategy by Google to acquire users, this expansion of Meet is months too late, and as an attempt to salvage its dignity, years too late. After the execution of Reader and the utter boondoggle that was Google+, the company will forever be considered as having a gun in each hand, one pointed at users and one at its own foot. Sorry, do I seem bitter?

At the same time, it’s quite clear that Google has the capability to create a simple, cross-platform, universal video calling service. After all, it offered one for years: GChat.

It’s not really clear what happened to this popular, practical service, which unsurprisingly lived exactly where Meet now lives, and provided a similar (if simpler) service. Now is not the time to reopen the case of GChat or the dozens of other beloved products Google has sent to the big data center in the sky, but it’s worth considering what might have been the case had the company simply, as it said it wanted to, “put more wood behind fewer arrows” and made that service the one, developing and adding to it as it has with Maps and Search.

GChat would be open in every browser (in the omnipresent Gmail tab), able to launch personal or business meetings instantly (as Meet can now), and it would be on every phone as well, the way Google’s most popular apps, like Maps, are. As a (mostly) trusted, presumably encrypted chat and occasional multimedia app, it could have taken the wind out of WhatsApp and Messenger’s sails, rivaled iMessage and perhaps even given rise to the more decentralized social network the company seemed to want to build some years back.

Ah well. “Of all sad words of tongue or pen, the saddest are these: ‘It might have been.’ ”

Enjoy Meet, if you can, and while it lasts.