U.S. companies rely on Mexican manufacturers for goods ranging from automotive and aerospace parts, to avocados and other produce, to electronics and furniture. But the trucking system that transports these things across the border relies on an inefficient mix of paper, phone calls, faxes and too many stakeholders who drive up costs.

These snarls congesting border traffic are precisely why Nuvocargo founder and CEO Deepak Chhugani has raised a $5.3 million seed round for a managed marketplace for door to door freight transportation, serving trade routes between the United States and Mexico.

Investment came from both sides of the border. The round was co-led by Silicon Valley-based NFX and Mexico City-based ALLVP. And Nuvocargo marks the first deal for Antonia Rojas-Eing, the youngest female VC in Latin America, under ALLVP, which she joined earlier this year as a partner.

The seed round also saw participation from One Way Ventures, Maya Capital, Magma Partners, the co-founders of Rappi, the former CMO of Cabify and other angels. The total includes earlier backing from Y Combinator, when Nuvocargo existed under a different name.

Chhugani joined Y Combinator’s W18 class with a startup called The Lobby, which sought to connect job seekers to personalized coaches. He raised $1.2 million for the startup, but decided to pivot into logistics and work on Nuvocargo. The change in direction was fairly natural for the Ecuador-raised entrepreneur, who cited his family’s previous work in the Latin American logistics industry.

When the time came to pivot, Chhugani offered investors their money back. Some chose to leave, but Y Combinator elected to stay under the new promise of digitizing trucking between Mexico and the U.S. Nuvocargo says that the $5.3 million seed is its first round, and what they’ve raised to date. Investors who stayed in from The Lobby are part of this round for Nuvocargo. 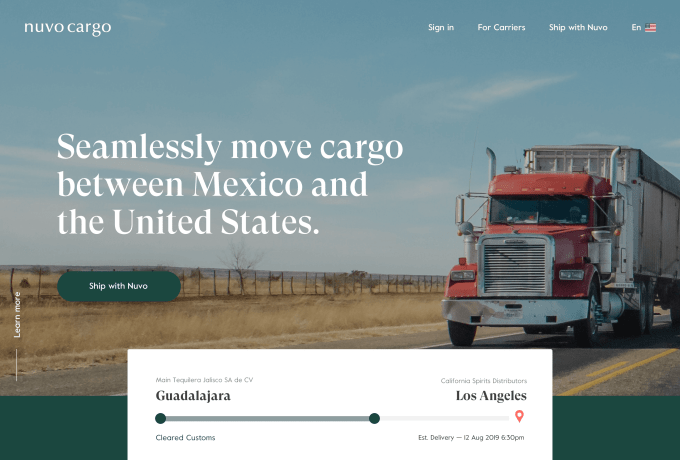 Nuvocargo, which calls itself a modern managed marketplace for door to door freight transportation, has set up shop with fully bilingual teams in both New York and Mexico.

Mexico is already one of the United States’ largest trade partners, and Chhugani predicts that relationship will only strengthen in the next decade. The U.S.-China trade war shows no signs of easing and tariffs have increased buying friction. With the 2018 United States-Mexico-Canada Agreement that aims to renegotiate NAFTA and uncertainty around coronavirus, Chhugani believes Mexico will become an even more attractive trade opportunity to capitalize on with Nuvocargo.

To the company’s knowledge, U.S.-Mexico trucking is within the top five biggest trade lanes in the world, with 6.5 million trucking shipments going between Mexico and the U.S. every year. Notably, 80% of all the goods transported between the U.S. and Mexico move by truck.

VCs have jumped on the freight and logistics opportunity as startups like NEXT Trucking, Convoy and Flexport secure hundreds of millions dollars from investors like Sequoia and SoftBank.

Now, smaller startups like Nuvocargo that specialize on specific routes and countries are focusing in regionally to bring online these systems that rely on paper, phone calls, faxes and spreadsheets to do business.

The 15-person startup wants to house the entire shipping process within its tracking software, simplifying the customer experience. The customer, Chhugani says, is any company that needs to move goods between Mexico and the U.S., and he notes that Nuvocargo is working with dozens of customers ranging from beverage companies to multi-billion-dollar corporations — though he declined to specify who.

Chhugani says that in a typical U.S.-Mexico cross-border trucking transaction, up to 12 stakeholders are involved in a single shipment, and that is too many. Multiple people on the U.S. side are procuring the trucks and managing customs, FDA inspection and warehouse storage. On the Mexico side there are even more entities handling scheduling and pick up for the trucking companies and drivers.

With the new seed funding, Nuvocargo will prioritize early hires in product, operations, finance and engineering in its New York and Mexico offices on its fully bilingual team.

Chhugani says he’s especially appreciative of the truck drivers that put themselves in harms way to ensure critical items are getting to the right destination, ensuring shelves are stocked. He says that in this uncertain time, Nuvocargo is working to give drivers predictable business near their homes, and pay them faster. “All of us as a society should be more appreciative of truck drivers and the trucking industry, because this is something that really fuels the economy in both the United States and in Mexico.”

In the current age of the coronavirus pandemic, Nuvocargo says it is focusing significant efforts on working with companies that are transporting essential goods to aid in the supply crisis.