Facebook today is introducing another feature aimed at making it easier to see who’s behind the posts published across Facebook and Instagram. The company says it will now display the location of the Facebook Page or Instagram account with a large audience on every post it shares, so end users have a better understanding of how reliable or authentic the accounts may be. While the feature is described as one designed for overall increased transparency, it will initially launch only in the U.S.

That means Facebook will display the location information for Facebook Pages and Instagram accounts that are based outside the U.S., but that reach large audiences located primarily in the U.S.

The company declined to say how it defines what constitutes a “large” audience or how many accounts would be impacted.

The move is the latest attempt to crack down on outside influence on U.S. politics and elections, following the revelation that Russia-backed content reached as many as 126 million Americans on Facebook’s platform during and after the 2016 presidential election.

That led Facebook to implement several new processes around Pages and political ad transparency in the years since. 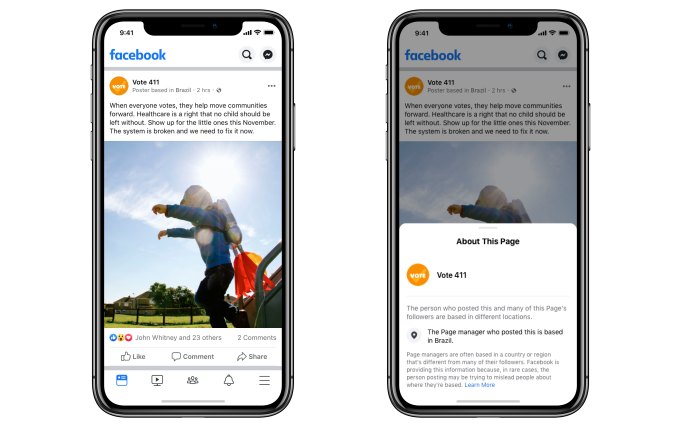 In August 2018, for example, it implemented a new measure for securing Facebook Pages with large U.S. followings in order to make it more difficult for people to administer a Page using a fake or compromised account. This process involved having Facebook Page managers secure their accounts and verify their location. By December 2018, this “People Who Manage This Page” section had rolled out to all Facebook Pages with a large audience.

Facebook last year made this section easier to find by adding it to the Home tab on every Page, and expanded the feature to those who managed Pages with large audiences in India, Indonesia and the EU, as well.

Similar authentication and verification tools were also rolled out to Instagram in 2018. 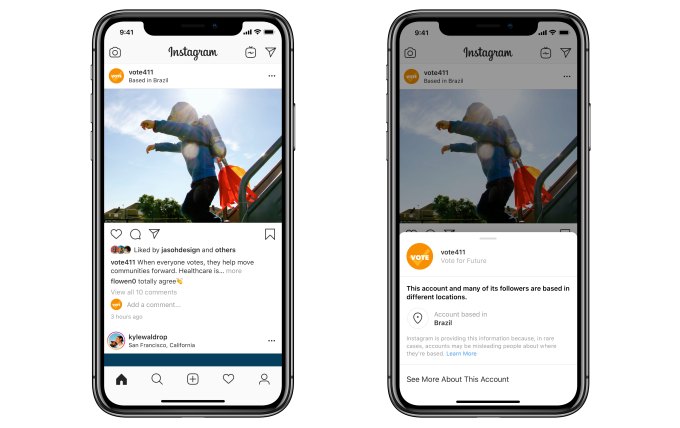 The new feature arriving today is an expansion on those earlier efforts, as it will display the location of the Page or Instagram Account directly beneath their Page or Account name on the posts they share. This will read “Poster based in…” followed by their country on posts published on Facebook and “Based in…” on those published to Instagram.

Users will also be able to access an informational pop-up about the Page or Account which further explains that the person or account who posted this content and many of its followers are based in different locations. The message will also state that Facebook or Instagram is providing this information because some accounts attempt to mislead people about where they’re based.

This is a significant change compared with providing this location information somewhere more buried on the Facebook Page or profile, where it can be easily overlooked. And because it follows the account as the post is shared, it could cut down on the viral re-sharing of misleading information.

However useful, this feature will only be the latest volley in an ongoing war with often state-sponsored propaganda bot networks aimed at misleading Americans. As Facebook’s systems evolve, so will the bot networks’ tactics. They’ll find new ways to fake their location as being U.S.-based…or simply being based outside of Russia. In fact, Russian trolls had already outsourced some of their propaganda efforts to Africa, a recent investigation found. And the battle will continue.

Facebook says it’s piloting the new location transparency feature in the U.S. now and is exploring ways to bring this transparency to more places on Facebook Pages and Instagram Profiles. The feature is live now on Facebook and rolling out currently on Instagram.