Google is today announcing a series of policy changes aimed at eliminating untrustworthy apps from its Android app marketplace, the Google Play store. The changes are meant to give users more control over how their data is used, tighten subscription policies and help prevent deceptive apps and media — including those involving deepfakes — from becoming available on the Google Play Store.

The first of these new policies is focused on the location tracking permissions requested by some apps.

Overuse of location tracking has been an area Google has struggled to rein in. In Android 10, users were able to restrict apps’ access to location while the app was in use, similar to what’s been available on iOS. With the debut of Android 11, Google decided to give users even more control with the new ability to grant a temporary “one-time” permission to sensitive data, like location.

In February, Google said it would also soon require developers to get user permission before accessing background location data, after noting that many apps were asking for unnecessary user data. The company found that a number of these apps would have been able to provide the same experience to users if they only accessed location while the app was in use — there was no advantage to running the app in the background.

Of course, there’s an advantage for developers who are collecting location data. This sort of data can be sold to third-party through trackers that supply advertisers with detailed information about the app’s users, earning the developer additional income.

The new change to Google Play policies now requires that developers get approval to access background location in their apps.

But Google is giving developers time to comply. It says no action will be taken for new apps until August 2020 or on existing apps until November 2020.

A second policy is focused on subscription-based apps. Subscriptions have become a booming business industry-wide. They’re often a better way for apps to generate revenue as opposed to other monetization methods — like paid downloads, ads or in-app purchases.

However, many subscription apps are duping users into paying by not making it easy or obvious how to dismiss a subscription offer in order to use the free parts of an app, or not being clear about subscription terms or the length of free trials, among other things.

The new Google Play policy says developers will need to be explicit about their subscription terms, trials and offers, by telling users the following:

That means the “fine print” has to be included on the offer’s page, and developers shouldn’t use sneaky tricks like lighter font to hide the important bits, either. 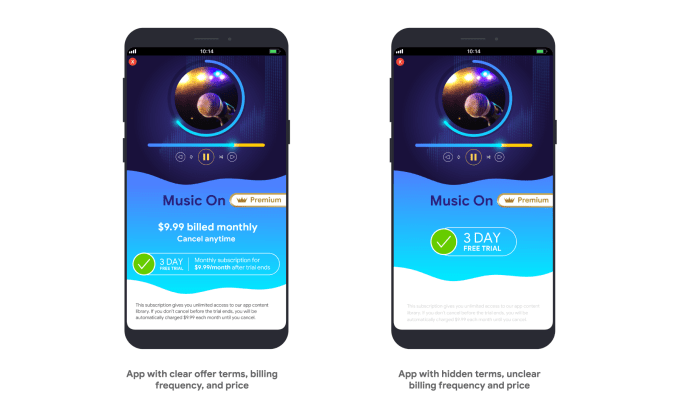 This change aims to address the rampant problem with “fleeceware” across the Google Play store. Multiple studies have shown subscription apps have gotten out of control. In fact, one study from January stated that over 600 million Android users had installed “fleeceware” apps from the Play Store. To be fair, the problem is not limited to Android. The iOS App Store was recently found to have an issue, too, with more than 3.5 million users having installed “fleeceware.”

Developers have until June 16, 2020 to come into compliance with this policy, Google says.

The final update has to do with the Play Store’s “Deceptive Behavior” policy.

This wasn’t detailed in Google’s official announcements about the new policies, but Google tells us it’s also rolling out updated rules around deceptive content and apps.

Before, Google’s policy was used to restrict apps that tried to deceive users — like apps claiming a functionally impossible task, those that lied in their listing about their content or features or those that mimicked the Android OS, among others.

The updated policy is meant to better ensure all apps are clear about their behavior once they’re downloaded. In particular, it’s meant to prevent any manipulated content (aka “deepfakes”) from being available on the Play Store.

However, it will take aim at apps that manipulate and alter media in a way that isn’t conventionally obvious or acceptable.

In particular, the policy will focus on apps that promote misleading imagery that could cause harm related to politics, social issues or sensitive events. The apps must also disclose or watermark the altered media if it isn’t clear the media has been altered.

Similar bans on manipulated media have been enacted across social media platforms, including Facebook, Twitter and WeChat. Apple’s App Store Developer Guidelines don’t specifically reference “deepfakes” by name, however, though it bans apps with false or defamatory information, outside of satire and humor.

Google says the apps currently available on Google Play have 30 days to comply with this change.

In Google’s announcement, the company said it understood these were difficult times for people, which is why it’s taken steps to minimize the short-term impact of these changes. In other words, it doesn’t sound like the policy changes will soon result in any mass banning or big Play Store clean-out — rather, they’re meant to set the stage for better policing of the store in the future.