Last month, it was reported that digital locker service Movies Anywhere was working to launch a movie-sharing feature called “Screen Pass.” At the time, the feature was only available in limited, private beta testing with a plan to fully roll it out in late summer or early fall. But as a result of increased demand from consumers stuck at home under government lockdowns and quarantines, Movies Anywhere has rushed to launch the sharing feature into an open, public beta.

The Movies Anywhere app today allows consumers to access their purchased movies from across a range of services, including iTunes, Vudu, Prime Video, YouTube, Xfinity and many others. Today, the app is jointly operated by Disney, Universal, WB, Sony Pictures and 20th Century Fox. An earlier 2014 version of the service was called Disney Movies Anywhere, but it later migrated to a new platform in 2017 and the app was rebuilt to serve the expanded group of operating partners. The two are related efforts, but much different businesses.

Movies Anywhere had been developing the movie-sharing feature with plans for a later launch. But the overwhelmingly positive response to its testing encouraged the company to move up the launch even further.

Screen Pass will allow Movies Anywhere users to loan out only three movies per month to family and friends. The movies can then be watched across the Movies Anywhere platform.

To share the title, you can view eligible titles from a new section under “My Movies” in the app, then click the Screen Pass icon on the title you want to share and provide the details. Movies can be sent out over text, email or message and the recipient has a week to accept the share.

The shared movie will effectively work like a movie rental, as recipients will have a limited time to watch — in this case, up to 14 days. Once the movie is started, recipients have 72 hours to finish watching. But unlike a rental, it’s free to share a movie and free to watch.

Only some titles will be “Screen Pass-eligible” at launch and they aren’t able to be saved for offline viewing. Only purchased movies can be downloaded, the company says. To use the feature, the Movies Anywhere account will also need to belong to a U.S. resident. 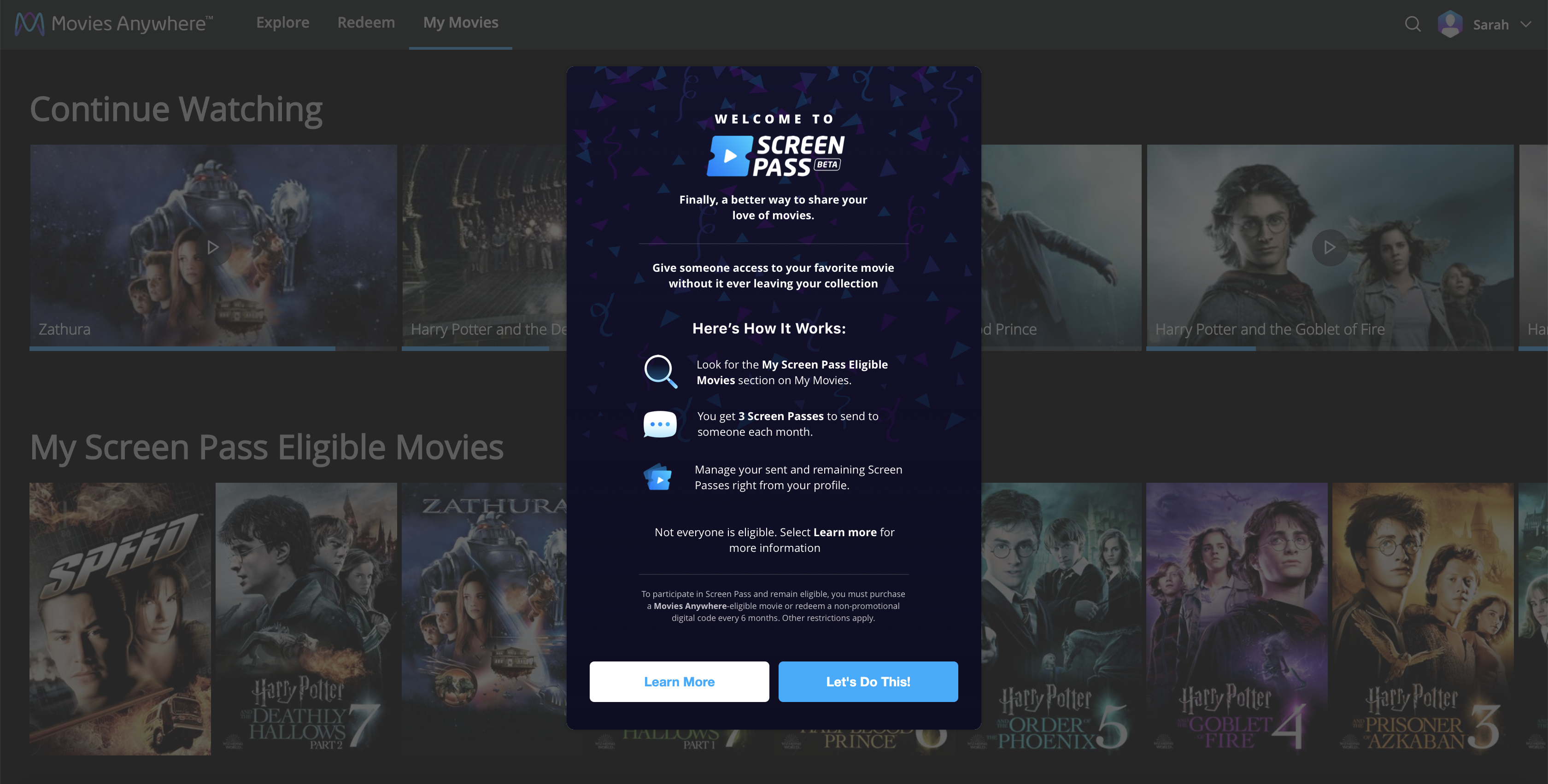 Screen Pass is currently supported on a range of popular movies, including “The Fate of the Furious (F8),” “Tombstone,” “Logan,” “Wonder Woman,” “Trolls,” “The Lego Movie,” “Cloudy with a Chance of Meatballs,” “Groundhog Day,” “Rushmore,” the “Harry Potter” movies, “Jason Bourne,” “Elf,” “Sing,” “Role Models,” “Bad Moms,” “Happy Feet,” “Ready Player One,” “Speed,” “The Karate Kid,” “Back to the Future” and others. In total, around 80% of movies available in Movies Anywhere are Screen Pass-eligible, or more than 6,000 titles.

Users who want to join the public beta test can sign up using this link. Users can also accept a Screen Pass from a current beta participant, which then opts them into the beta testing group, too.

The company does not have a planned commercial launch date yet for the feature.