Neighborhood social networking app Nextdoor has introduced two new features, Help Maps and Groups, to give people a way to better support one another during the coronavirus outbreak. The Help Map offers a way to coordinate aid between those in need, like the elderly and at-risk, and those willing to offer some form of assistance — like running errands or dropping off supplies, for example. Groups, meanwhile, allows smaller groups to network outside of the main feed.

Nextdoor had the technology for a map-based feature like the Help Map, as it today offers a map of real estate listings in its app and runs annual features, like the Halloween Treat Map or Holiday Cheer Map, which shows which homes are decked out with Christmas lights or other holiday decorations.

The Help Maps works similarly, but instead of listing your house, you’re able to list the services you’re willing to provide.

After updating the Nextdoor app to the latest version, you’ll find the new “Help Map” option under the More menu. From here, you can choose to either view the map or click a button to offer help to your neighbors. 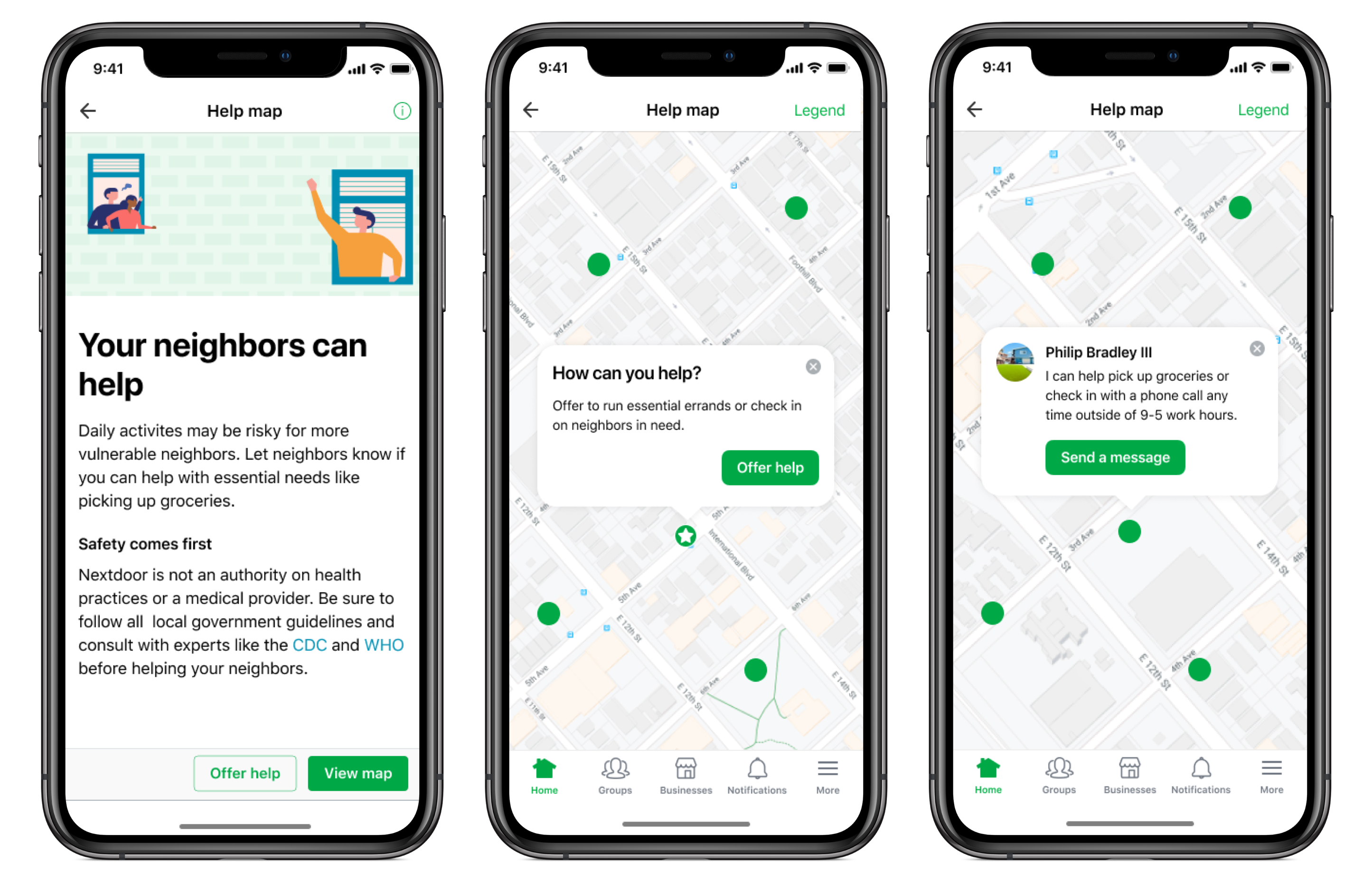 Members who add themselves to the map can then detail the errands they could run or the other sort of assistance they can provide — like offering a daily check-in phone call, delivering groceries or fetching prescriptions.

Though most stores have begun offering special early morning hours for those at the most risk for COVID-19, limiting exposure by staying at home is the best option. The Help Map, therefore, isn’t just handy — it’s a potential life-saver.

Related to this, Nextdoor is also launching out of beta its Groups feature to users worldwide. Similar to Facebook Groups, Nextdoor’s Groups allows communities to organize around topics, interests, providing aid or anything else. But unlike Facebook, which doesn’t have an official way to confirm people are who they say or where they live, Nextdoor validates users by phone or postal mail.

On Nextdoor Groups, neighbors can organize either by their specific neighborhood alone, with other neighborhoods nearby, or on a city-wide basis. 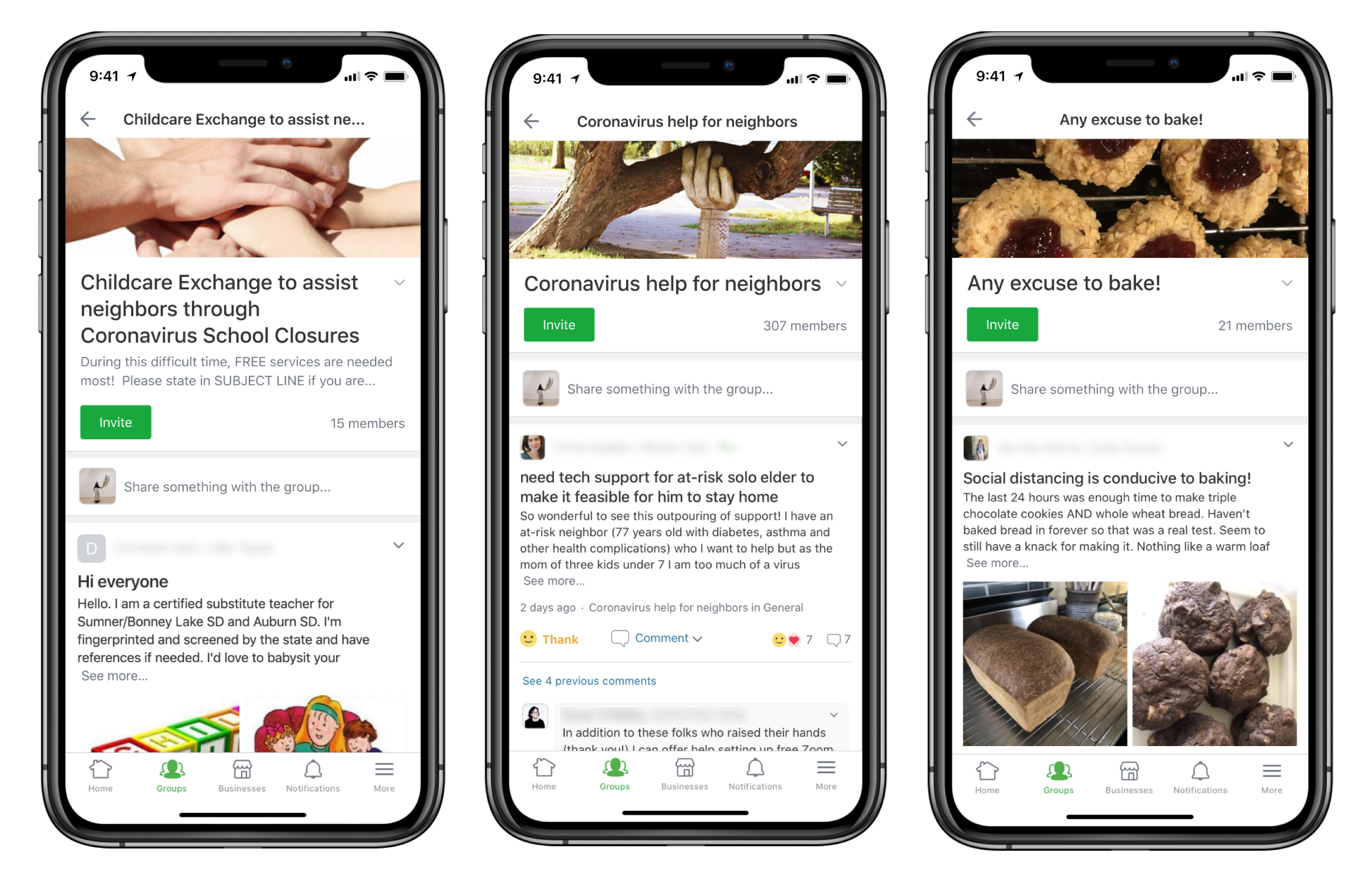 During the beta, neighbors were already beginning to use the feature for COVID-19 topics, including ways to unite communities, ways for parents to help kids stay connected during school closures and different hobbies that can be done while stuck at home.

Nextdoor usage grew as the coronavirus outbreak took off in the U.S. People turned to the app to share local news and information — like where toilet paper is available. The company said user engagement had grown by 80% in the last two weeks, particularly in hard-hit areas like Seattle and New York.

App downloads have grown, too, sending Nextdoor further up the App Store’s Top Free Charts. In February, Nextdoor was ranking in the mid-to-lower 200s on the Top Free Chart, and was No. 168 as of Wednesday.

Conversations around COVID-19 on Nextdoor haven’t always been productive, however. Misinformation, bad health advice and more have spread on the app, which doesn’t have Facebook-sized resources for moderation.

“People on Nextdoor are freaking out about coronavirus,” said a recent BuzzFeed story. CNN also called the app a “hub of anxiety.”

As a result of its latest additions, Nextdoor usage is likely to spike even further — and hopefully refocus some of its members’ mania on doing good and helping others, instead of inciting further panic.