Credit Sesame is getting into digital banking. The credit and loans company, first launched at TechCrunch Disrupt in 2010, has since grown to 15 million registered users and, in 2016, achieved profitability. To date, its focus has been on helping consumers achieve financial health by taking steps to consolidate debt and raise their credit score. Now, it’s expanding to include digital banking, but with the goal of using its better understanding of its banking customers’ finances to better personalize its credit improvement recommendations.

The new service, Sesame Cash, has many features found in other challenger banking apps, like a general lack of fees, real-time notifications, an early payday option, free access to a sizable ATM network, in-app debit card management and more. Specifically, Credit Sesame says it won’t charge monthly fees or overdraft fees, and it provides free access to more than 55,000 ATMs and a no-fee debit card from Mastercard. 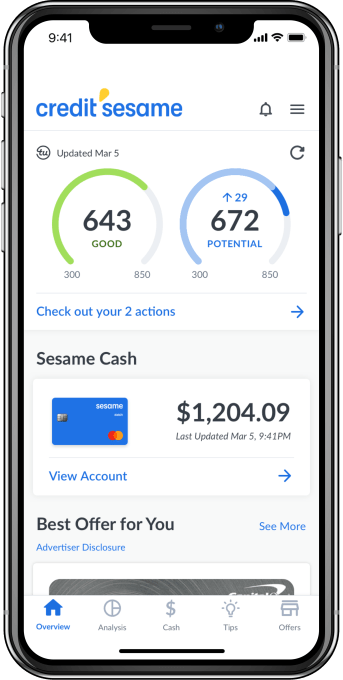 However, the banking app also serves a secondary purpose beyond its plan to take on traditional banks. Because the company has insights into users’ finances and repayment abilities, it will be able to offer personalized recommendations, including those for relevant credit products from its hundreds of financial institution partners.

Other features also differentiate Sesame Cash from rival challenger banks, including built-in access to view your daily credit score and a system that rewards consumers with cash incentives — up to $100 per month — for credit score improvements. The banking app includes $1 million in credit and identity theft protection, as well.

In the months following its launch, the company is planning to introduce a smart bill pay service that manages cash to improve credit and lower interest rates on credit balances, plus an auto-savings feature that works by rounding up transactions, a rewards program for everyday purchases and other smart budgeting tools.

“Through the use of advanced machine learning and AI, we’ve helped millions of consumers improve and manage their credit. However, we identified the disconnect between consumers’ cash and credit—how much cash you have, and how and when you use your cash has an impact on your credit health,” said Adrian Nazari, Credit Sesame Founder and CEO, in a statement. “With Sesame Cash, we are now bridging that gap and unlocking a whole new set of benefits and capabilities in a new product category. This underscores our mission and commitment to innovation and financial inclusion, and the importance we place in working with partners who share the same ethos,” he added.

Credit Sesame today caters to consumers interested in bettering their credit. The company says 61% of its members see credit score improvements within their first six months, and 50% see scores improve by more than 10 points during that time. Indeed, 20% see their score improve by more than 50 points during the first six months. 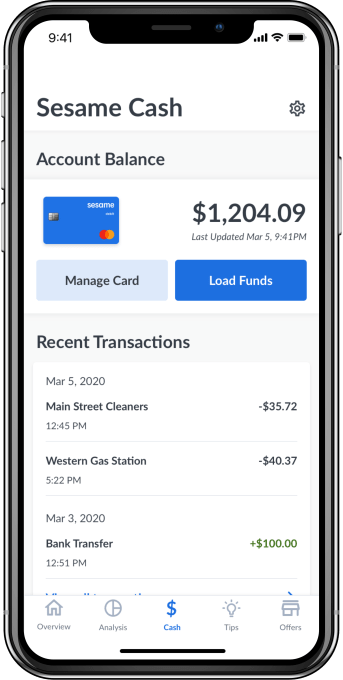 But one challenge Credit Sesame faces is that after consumers reach their goals, credit-wise, they may become less engaged with the Credit Sesame platform. The new banking app changes that, by allowing the company to maintain a relationship with customers over time.

Credit Sesame is a smaller version of Credit Karma, which was recently acquired by Intuit for $7 billion. Since then, it has been rumored to be another potential acquisition target for Intuit, if it didn’t proceed to go public. The banking service would make Credit Sesame more attractive to a potential acquirer, if that’s the case, as it would offer something Credit Karma did not.

The banking service will initially be made available to existing customers, before becoming available to the general public. The Credit Sesame mobile app is a free download for iPhone and Android.