The disinformation wars are heating up as the U.S. barrels toward the 2020 presidential election, leaving tech companies again uncomfortable in the role of referee.

On Monday, Facebook joined Twitter in flagging a video shared by White House Director of Social Media Dan Scavino, marking it as “partly false” and limiting its ability to spread on the platform. In the video, presidential candidate and former Vice President Joe Biden warns about the potential of reelecting Trump, but the viral clip is edited down to a portion that misleadingly makes it sound as though Biden is endorsing Trump. 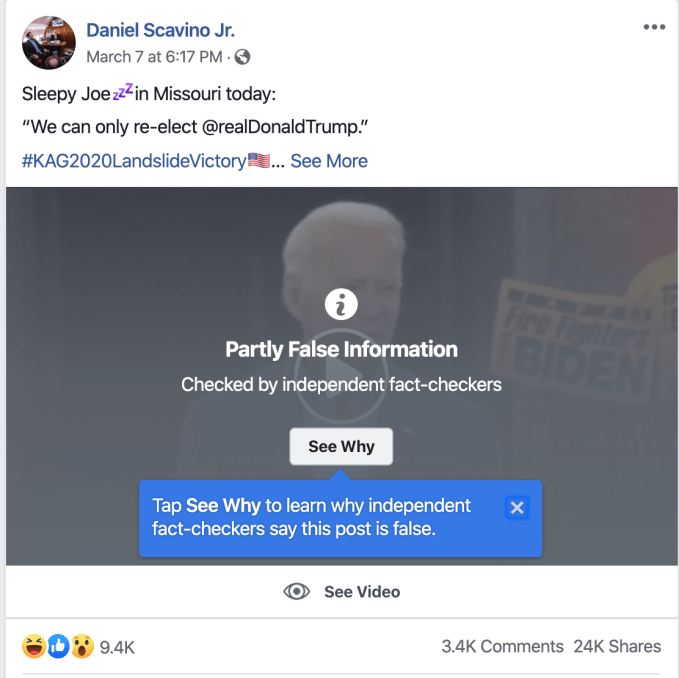 “Fact-checkers rated this video as partly false, so we are reducing its distribution and showing warning labels with more context for people who see it, try to share it, or already have,” a Facebook spokesperson told TechCrunch. “As we announced last year, the same applies if a politician shares the video, if it was otherwise fact checked when shared by others on Facebook.”

Over the weekend, President Trump retweeted the video to his 73.5 million Twitter followers, stating “I agree with Joe!”

Flagging the video sets an interesting precedent, particularly given that last month both platforms declined to act on a deceptively edited video depicting Speaker of the House Nancy Pelosi ripping up President Trump’s state of the union address. While Pelosi did in fact rip up the address, the video misrepresented the order of events, misleadingly showing Pelosi shredding the speech as Trump honored members of the military.

At the time, Facebook Policy Communications lead Andy Stone aggressively defended Facebook’s decision to let the video spread in a testy exchange with Pelosi Deputy Chief of Staff Drew Hammill, who argued that every day Facebook declined to remove the video “is another reminder that they care more about their shareholders’ interests than the public’s interests.” Stone’s response at the time was combative.

Sorry, are you suggesting the President didn't make those remarks and the Speaker didn't rip the speech?

TechCrunch has reached out to both platforms to clarify how the Biden video violates their policies while the Pelosi video did not.

As Biden’s campaign ramps after a much-needed shot in the arm from Super Tuesday, the internet is rife with videos of the former vice president’s many gaffes. While critics leverage Biden’s stumbles as evidence that he is unfit for the presidency, an interview earlier this year revealed that at least some of his occasionally faltering speech is likely a result of a lifelong stutter, a disorder characterized by disruptions to the flow of speech.

In a statement prior to Facebook’s decision to label the video on Monday, Biden Campaign Manager Greg Schultz slammed Facebook’s “malfeasance” around disinformation. “Facebook won’t say it, but it is apparent to all who have examined their conduct and policies: they care first and foremost about money and, to that end, are willing to serve as one of the world’s most effective mediums for the spread of vile lies.”