DocSend has become one of the most popular tools for sharing venture fundraise decks, not only because of the control it offers, but also because of the analytics it can provide founders on how VCs read decks and where they might get stuck as they are perusing from slide to slide.

The company has been generous sharing its data with us on what times are best to fundraise and how to structure a slide deck for best performance. Now the company has released a new report on the state of pre-seed funding, and it is chock full of interesting facts and figures.

When is the right time to pitch VCs for funding?

You should read the deck, but I would point out three interesting patterns that arise from the company’s data.

First, there is a really fascinating pattern comparing the number of founders at a startup with the amount of money the startup eventually fundraises and how many meetings it takes to close a pre-seed round. I created a chart from DocSend’s data here: 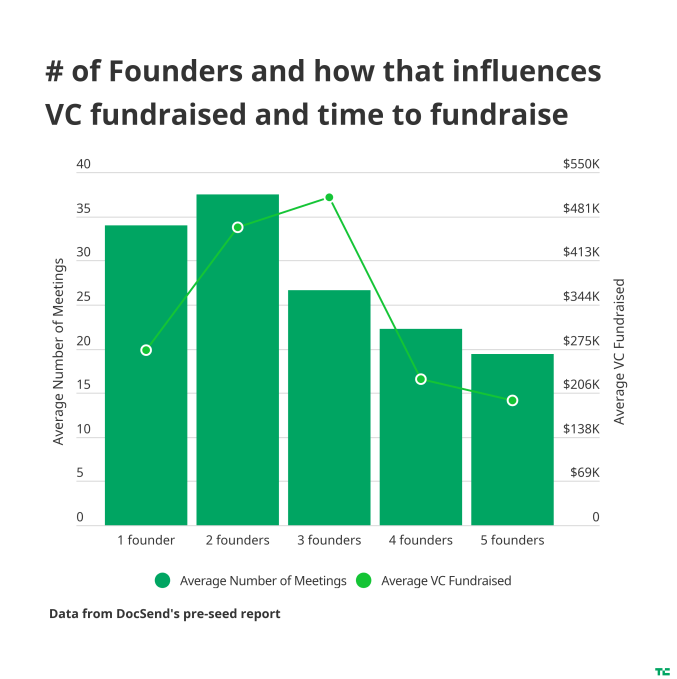 What’s interesting is that there is (almost) a straight linear decrease in the number of meetings required to close a pre-seed round as the number of founders increases. This makes sense to some degree: given how early most of these rounds are, one of the best ways to de-risk an investment is to simply add more people early on. Theoretically, five people can get more work done than a “team” of just one person.

But despite what appears to be an easier time fundraising, the actual dollars coming in doesn’t reflect the potentially de-risked nature of having more co-founders. In fact, three founders is the peak for dollars invested into a company — at $511,522 — and it swiftly decreases as teams add one or two more co-founders.

I have hypotheses on why that might be, although without more data, it’s hard to answer them. But if you want to optimize your pre-seed fundraise and you are looking for a magic number, it definitely seems that three co-founders is what pre-seed VCs today are looking for.

A second interesting nugget in this report is what slides tend to be included in successful pre-seed fundraise decks. The typical ones are listed and are fairly uniformly included, such as Company Purpose, Problem, Solution, Market Size, Product, Business Model, and Team.

But “Why Now” slides are only included in 53% of successful pre-seed fundraise decks in DocSend’s dataset, and that seems absolutely nuts to me. With the number of startups plying their trade in all kinds of verticals, if something hasn’t been built yet, there usually is at least some reason why there isn’t an incumbent startup that has been successful. That’s usually what gets answered in a Why Now slide, but I guess a lot of pre-seed investors just sort of take it at face value that new startups are going to cut through the market no matter what has happened before.

What’s even crazier though is that only two-thirds of decks included a Fundraising Ask. This used to be Fundraising 101: you always included an “ask” at the end of the deck to make sure that investors knew what you were looking for in terms of capital requirements. But with the rise of complexity around seed, I can understand that the Ask slide is just becoming more and more complicated to include, particularly at pre-seed, and so founders are dropping it.

6 strategic stages of seed fundraising in 2020

The third and final data point I thought was fascinating was around the number of investors contacted as part of a fundraising process. DocSend’s report has a handy graph, but my takeaway is that while some folks manage to fundraise with very little outreach to investors, a whole other group needs to contact upwards of 100, 150 or even 200 investors in order to raise their pre-seed.

I have repeated a mantra that pitching 100 investors per round is not uncommon for many startups, and that seems to be borne out here in the data. Yes, 100+ contacts is a large number, but ultimately, some fundraises are just tough, and the more people that potentially get a look at your company, the more likelier you are to succeed.

DocSend CEO Russ Heddleston told me that his own personal takeaway is that the quality bar has just gone up for many early-stage startups. “We used to say you could get funding with an MVPP (minimum viable PowerPoint), but VCs are spending a significant amount of time looking at the product pages of successful decks, and really expect a level of product readiness that we didn’t see five years ago,” he said.

There’s a lot more in the report, but those are some highlights. Definitely check out all of DocSend’s other data as well.