One of the big, ongoing debates in VC and founder circles concerns whether to accept money from top-tier, later-stage venture capitalists during a seed round. Even as their funds reach monstrous sizes, more and more top funds are investing in the earliest stages of a startup’s life, intensifying the question for founders of so-called “signaling risk”: if a later-stage investor in your seed round doesn’t actually do your later-stage rounds, does that negatively signal to other potential investors that they should walk away from your company?

It’s a perennial debate largely because it’s hard to build a quality data set to definitively answer the question. But now, we might have some data that finally sheds light on this signaling risk.

AngelList’s data science team collected information from its Venture portfolio (which includes approximately $1.8 billion assets under management according to the company) to look at how signaling risk has changed over time according to the cohort performance of startups in their portfolio. The essential question was, “Does having a top-10 investor in your seed round improve or hurt your chances of a follow-on round 18 months later, compared to seed rounds without such an investor?” Their work produced this chart: 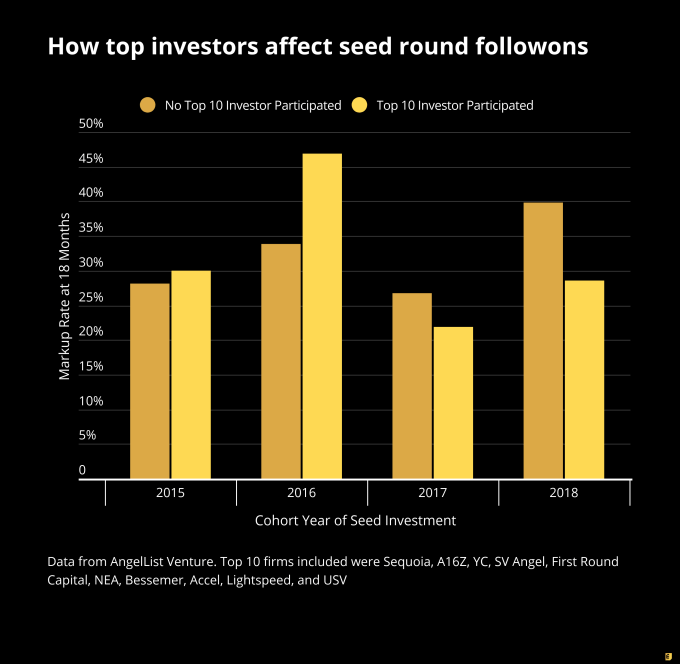 Two quick and important notes. First, AngelList processed its own data (given the need to protect confidentiality, I wasn’t given direct access to their data set for analysis). Second, AngelList supplied notes on its methodology, which I have attached at the end unedited for those curious how the data set and chart were constructed.

The short summary of the data is that in the 2015 and 2016 cohorts, having a top-10 VC investor in your seed round appeared to improve a startup’s chances to raise a follow-on equity round, particularly in 2016. However, that benefit seemed to reverse itself in the 2017 cohort, and the negative effect was magnified in the 2018 cohort.

The typical caveat emptor applies: correlations are not causations. That said, we know signaling is a real mechanism for VCs to make an investment decision, so there is at least some form of causal path here in the data.

My analysis (and it should be noted this isn’t endorsed by AngelList) is that top-10 investors like Sequoia or a16z have radically expanded their seed investment programs over the past two years in pursuit of more and more cap table access. As VCs scour the universe looking for the next great startup, those firms with the deepest pockets are choosing to invest in any round rather than to try to time their investment into a later round that would more properly fit into the thesis of their massive funds.

So for startups in the 2015 and 2016 cohorts, there was real selectivity (or at least, more selectivity) when it came to getting an investment from a top investor. Those startups may not have gone through the full due diligence process typical of a Series A investment, but they were typically well-vetted, and that sent a strong positive signal to other investors in later rounds.

Perhaps most importantly, and this is based on my own anecdotal data here, but most Series A and later firms that participated in a seed round in those years ended up getting toward the kind of equity ownership they normally target (let’s say 20% as a typical example). So the signaling risk was fairly mute, since if an investor already has their ownership locked in, it’s understandable they wouldn’t necessarily lead the next venture rounds of a company.

All that has changed in the last two years though. Large funds increasingly slosh money through the ecosystem, whether directly as a firm, through seed funds managed by GPs, through scout networks, or indirectly by investing in other seed funds. The exclusivity of these sorts of investments has markedly declined as the capital flood has flowed through the Valley.

Plus, these firms now write ever-smaller checks, and may even join party rounds as well, which means that their ownership post-seed is not nearly as high as it once was. If a top firm does part of your seed and owns 3%, there really is a legitimate question as to why they wouldn’t fund your Series A if they were indeed excited about your prospects and also had information rights to keep track of your startup’s development.

I’ve talked quite extensively about how there are now six stages of seed investing in 2020, and that founders should more carefully identify which stage they truly are in and reach out judiciously to the investors who actually fit those micro-stages.

6 strategic stages of seed fundraising in 2020

We looked at all of the AngelList Venture seed deals (investments by syndicates and funds tagged as “Pre-Seed”, “Seed”, or “Seed+”) that closed in the given year-cohort. Then we looked at whether, after 18 months, those investments had been marked up and had not exited. We believe that is the best proxy in our data for “was an active Series A company”, because the AngelList valuation methodology is to only update valuations on priced equity rounds; companies that raised again with SAFEs would not trigger a markup, even if those SAFEs are at a higher cap. For 2018 deals, we did not consider deals after August 2018 because deals at the end of that year have not had 18 months to season.

And adding one more note here that the top-10 investors included in the sample were ultimately Sequoia, a16z, YC, SV Angel, First Round Capital, NEA, Bessemer, Accel, Lightspeed and USV.