In uncertain times, people go looking for answers in unusual places. And in 2019, many U.S. consumers found their answers in the stars — or, more specifically, in a group of increasingly popular astrology apps offering horoscopes, fortunes, palm-reading and mobile access to psychics, among other things. According to new data from Sensor Tower, the top 10 astrology apps in the U.S. market grew their revenues by 64.7% in 2019 to reach $40 million. That’s up from $24.1 million in 2018 and just $7.7 million back in 2016.

The biggest app in this space was Astrology & Palmistry Coach, which generated 35.3% of the top 10’s revenue for the year, or approximately $14 million. 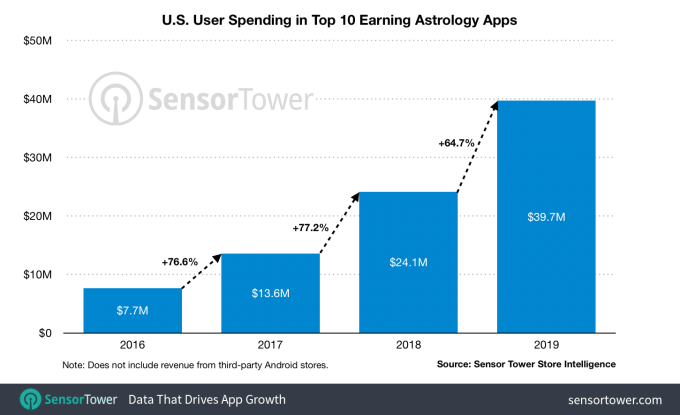 Newcomers in 2019’s top 10 include FortuneScope, Horoscope & Palm Master and Astroline. Two of these tap into the mobile phone’s camera to automate palm readings — a feature none of the top apps offered in 2016 and an indication of how the apps are modernizing to reach a young, tech-savvy audience.

Investors have also seen the potential in the market. In 2019, the top 10 astrology app Co-Star, which ended the year as second-most downloaded in its category, raised a $5 million seed round. Two other apps mentioned as examples in an NYT piece about the rise of astrology apps, Sanctuary and Pattern, didn’t make the top 10. (Pattern, however, wasn’t considered for this round-up because it’s not overtly a horoscope app, Sensor Tower explains. Sanctuary ranked at No. 28 for revenue and No. 21 for downloads.)

The problem with the astrology market, however, is that its audience may be limited. While today’s group of apps are growing their revenues steadily, their reach is not growing as quickly. In 2019, the top 10 most downloaded astrology apps saw 19 million first-time installs — only up 3% over 2018. This also represents a slowdown since the 70.6% growth seen between 2017 and 2018. 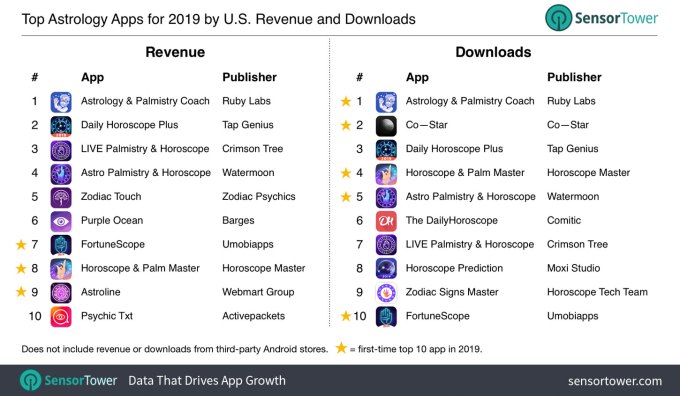 Only one app has been a top 10 download since 2019: The DailyHoroscope. Meanwhile, the No. 1 most downloaded app this year, Astrology & Palmistry Coach, saw 3.3 million installs in 2019.

Astrology is not science, but it’s relatively harmless for those who use these sorts of apps casually. At best, astrology gives people a sense of control in a chaotic world and helps them relate to others by ascribing personality traits and life’s seeming randomness to star signs and the movements of planets. Users may also learn about themselves in the process, as they’re forced to pause and examine their own behavior and feelings.

Critics, however, would argue that faith in astrology apps is just another example of how people are turning away from science, data and research and toward junk and sometimes even harmful pseudoscience — much like they do when seeking out alternative health information like that offered by Gwyneth Paltrow’s Goop, for example.

Astrology is only one of the breakout sub-genres within the “Lifestyle” category of apps in 2019. Sensor Tower previously reported the top 10 meditation apps pulled in $195 million in 2019, up 52% year-over-year.