In December, The New York Times reported a popular messaging app called ToTok was actually a spying tool used by the government of the United Arab Emirates to track users’ conversations, location and social connections. The app was removed from the Google Play store in December, while Google investigated, then reinstated in early January. Google now confirms the app has again been removed, but this time declined to comment as to why.

The site 9to5Google first noticed ToTok had again been pulled from Google Play on Friday.

Reached for comment, Google confirmed to TechCrunch that it removed the app from Google Play but that enforcement was not done in response to any external direction or request. That means the U.S. government did not get involved here, rather that Google chose to remove the app itself — likely for a policy violation.

According to The NYT’s original report, ToTok had been downloaded millions of times from both Apple and Google’s app stores by customers across the Middle East, Europe, Asia, Africa and North America in the few months since its launch. Citing unnamed U.S. intelligence sources, the report claimed the app had been used to track its users’ “every conversation, movement, relationship, appointment, sound, and image.”

At the time of the app’s removal, Google said the app had violated unspecified Google Play policies. The app had over 10 million installs by then, app intelligence firm Sensor Tower says.

Typically, third-party app intelligence firms like App Annie and Sensor Tower are able to see even very lowly ranked apps. For example, App Annie’s charts track apps as poorly ranked as #1750 in any category. But after its return, ToTok never even made it that high — even in its home market of UAE. 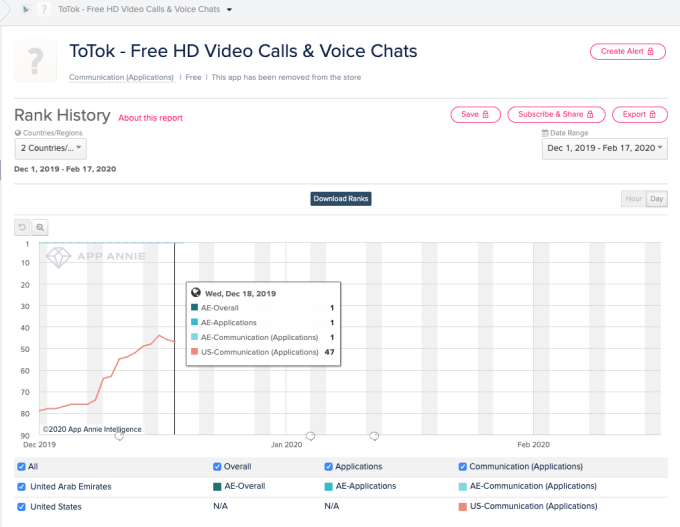 The app was available for download, however. Google confirms it removed the app on Friday, February 14, 2020 from the Play store.

Now ToTok’s website points to the app’s listing on a number of third-party Android app stores, but not Google Play. It also offers an APK file for direct download.