A shortage of good teachers and carers is an acute problem in the world of education. Getting smart people into the profession is hard when the pay is not great and the stresses coming from above and below are very real and very persistent.

And it turns out that challenge is compounded in the early years, before children even enter school: the pay for nursery teachers and childminders (individuals who take charge usually of up to six children depending on age, who apply for and get licenses from the educational authority to operating childminder schemes in the country) is even less than that for K-12 teachers, a fact not helped by the lack of a cohesive institutional system to bring in and bring up talent in an area that has a wide array of permutations (nursery, nanny, family, etc.).

Now, a startup out of London is announcing some funding to tackle that very large early years challenge with a two-sided marketplace of sorts. Tiney, which sources people interested in being childminders, trains them to run childcare services out of their homes and then helps childcare-seeking parents discover them, all while running the admin underpinning that ecosystem, has raised £5 million ($6.5 million) to scale its idea in earnest.

The funding is being led by Index Ventures with LocalGlobe (founded by former Index partners Saul and Robin Klein) and JamJar Investments (the investment firm linked to the founders of Innocent Drinks) also participating. Hannah Seal, a principal from Index Ventures, is joining the board with this round.

The startup is the brainchild of Brett Wigdortz, a London-based, American-bred ex-McKinsey consultant who has already started and grown two celebrated non-profit organisations to tackle teacher shortage problems in K-12 public education.

In the UK, he started Teach First, which recruits recent university grads take jobs as teachers in state schools — with a particular focus on disadvantaged school catchments — as their first foray into the job market. (It is now the single biggest employer out of Oxford and Cambridge.) Buoyed by that growth, he then took the idea international with Teach for All, co-founded with Wendy Kopp, who had built a similar teachers corps in the U.S. called Teach For America.

As with Teach for All, Wigdortz, who is the CEO, has a co-founder for his latest effort: Edd Read (CTO), who previously had been a founder of Graze, the healthy snack company that sold to Unilever last year, is Tiney’s other founder, which makes JamJar’s investment an interesting one. Healthy-but-fun foods are essentially focused on products to improve the well-being of families and kids. In a sense, so is Tiney. 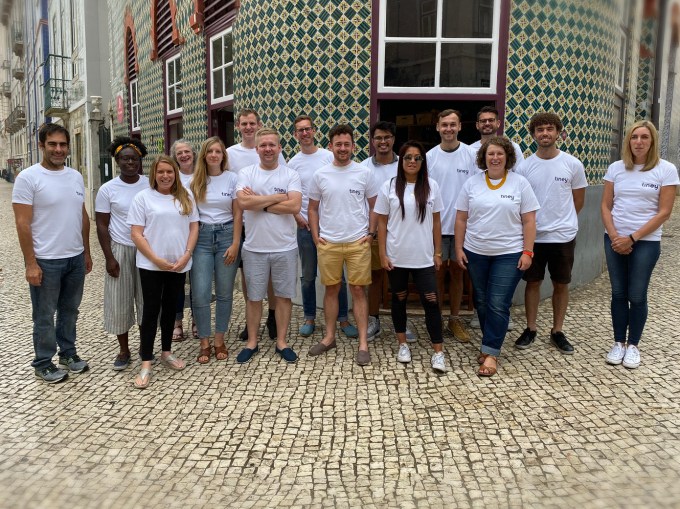 The problem as Wigdortz sees it is one of quality and quantity.

On the quality side, there has been, relatively speaking, more focus on children once they enter school — a focus he himself cultivated with his previous organisations — with a lot of neglect of the years preceding that time. But when you look closer, you can chart a good part of children’s outcomes starting before they ever entered school. One part of the problem is that early-years care is not often thought of as early-years education, and in keeping with that, the people providing that care are often thought of as babysitters rather than educators, with little in the way of providing ongoing training and support for best practices around fun activities that help with child development.

“The big gap was that kids weren’t getting good preschool educations,” he said in an interview. “We were finding that a lot of kids in year one [kindergarten age in the US] weren’t verbal and just weren’t ready for school. In some cases, parents are working all the time or really struggling.” And on the part of the providers, “they weren’t treated as professionals,” he continued. “They just didn’t get good professional development or support. Realising how broken it was is what got me interested in the sector.”

What caused that massive drop? Apart from having less interest in a field that isn’t respected much and has a lot of stress associated with it, there is the problem of simply proactively recruiting people and making childminders easy to find.

While each local authority (how a lot of social services are administered in the UK) provides directories to parents of childminders in a given region, the system is not ideal for sourcing much information beyond names, contact details and addresses — making it a daunting task to find someone to entrust with your child.

On the part of the childminders themselves, a process does exist today that sits within the public system. You get a paediatric first aid certificate; you complete a short training course approved by your local authority; you join the Ofsted Early Years Register and get a criminal record check for anyone over 16 living with you; you get a home inspection and you get insurance. Childminders subsequently keep journals on each child to communicate progress on early-years targets both to parents and the authorities.

But Wigdortz notes that while that looks like a simple enough list, it’s actually a long and bureaucratic process and any recruitment of new people is virtually nonexistent because of all the cutbacks local authorities have faced.

Going the usual route is also not ideal in terms of providing any kind of continuous training or monitoring of the childminders once they have completed the final step. Tiney is taking a tech approach to solving what is essentially an analogue challenge.

It is trying to “streamline the process,” in his words, while at the same time create a platform for more enriched training — which involves both in-person and online coursework — before people get started as childminders. And subsequent to that, it provides more continuous development, and a way of tracking progress online that is easily monitored by the parent compared to a hand-written journal. 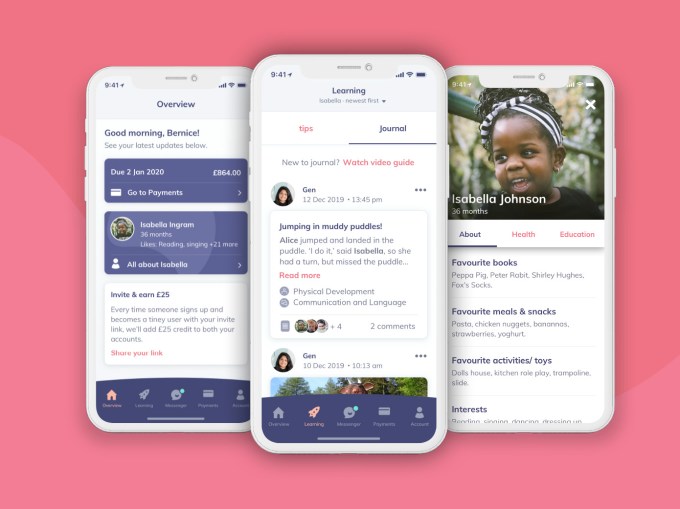 When childminders are ready to work, they get listed on Tiney’s site, are booked through there, and Tiney handles all of the messaging and invoicing between childminders and parents after. While all of the training, onboarding, development and ongoing support are free, Tiney makes a 10 percent commission on every job and contract booked through its platform. It’s a formula that is currently attracting more people than it has room to handle: only about 20 percent of applicants to Tiney’s program get accepted to complete the training, Wigdortz said.

The system is not just about bringing in more people into the childminding profession, but about making the whole concept and opportunity more open to more people. The average age today of a Tiney minder is early thirties, with about half of the population classified as “BAME” with a good dose of immigrants, but also white professionals, he said. “We have bankers who are taking career breaks when they have kids, and some have worked in nurseries before and now want to do something more independent,” he said.

Wigdortz came at this problem from the perspective of being able to source more talent and get it into the early-years caregiving and education pipeline. But the reason why it, and other programs like it — which include the likes of nanny service Koru Kids (also coincidentally started by a McKinsey alum) and Wonderschool in the U.S. Like Tiney also focuses on the ‘home-based childminder’ running small ad hoc nurseries format — are needed and will hopefully succeed is because they are filling a critical gap with parents and guardians.

On that side, three of the issues that Tiney is helping to address are discovery, trust and affordability.

When you are a working parent, securing good childcare can be one of the more stressful aspects of raising your kids when they are young. Choosing from many options (nursery? nanny? au pair? family? quit job and hang with kid yourself because the options are too expensive or scary?), and then finding people who you trust will understand and nurture your kids, is not easy. And throwing money at the challenge doesn’t necessarily help, and if money is an issue, that comes with its own set of problems.

In the UK, the childminder option is one that cuts across those famous British class lines, I’ve found. Those with financial means might opt for it to give their kids a more social experience than a one-per-family nanny or au pair but without the more institutional feeling and class numbers of a full-on nursery. Those with less means will consider childminders because they might be on par with the price of a nursery (and will be coverable by the same vouchers they might use if they’re on income support) but, again, provide more of a home-based environment that will feel more comfortable to a child under the age of 5, or for pre-secondary school aged kids in the after-school hours.

Tiney is currently adding around 25 new childminders per month, Wigdortz said, which is small but growing. The idea is that with this funding, it will be able to onboard more and grow faster.

“After improving primary and secondary education for millions of children through Teach First, Brett is now tackling some of the biggest challenges parents, children and the society face in the very early years,” said Seal at Index Ventures. “For parents of young children, sorting out childcare is often a struggle with limited often-costly and inadequate options. For educators, there is not always an easy path to a career in early years education, which has led to rapidly declining numbers of childminders across the UK. We’re excited to partner with Brett to address this growing crisis and create a system that puts more focus on children during the most critical years of development.”