In December, dating app Bumble announced new tools to filter match by more than just age and distance. Now, it seems Tinder is poised to do the same. Tinder parent company Match Group this week announced plans to expand its filtering capabilities, alongside other product updates such as new social engagement features and the forthcoming international launch for its interactive in-app experience called “Swipe Night.”

The company was light on details about how Tinder’s new filters would work, but did say there would be both free and paid options available. In Bumble’s case, the company offered daters two filters for free but to add more options was a paid upgrade. It wouldn’t be surprising to see Tinder do something similar.

“We…want to make the utility of Tinder better and more efficient,” explained outgoing Match Group CEO Mandy Ginsberg, who recently announced she’s stepping down from her position after 14 years with the company.

“We’ll be introducing features to give members more control over their experience,” she continued. “Tinder U is an example of this type of feature, where we enable users to limit their matches only to other college students. It was well-received, particularly with female users. We believe there’s an opportunity to introduce both free and paid features to enhance the experience,” Ginsberg added.

The Tinder U experience was launched in 2018 as a way to give one of Tinder’s core demographics — college students — a way to limit matches only to other students at their school. But many dating app users want to limit matches in other ways as well. Apps often accommodate this by way of filters that let you specify other factors, like educational background, religion, relationship type, political leaning, family plans, drinking or drug use and more, including sometimes even body type or height.

However, it’s not yet clear if Tinder plans to filter users by these specific options, as Bumble or even Match Groups’s OKC allows. Reached for comment, Tinder declined to offer details.

Of course, it’s not proven that using filters actually delivers a better set of matches, but being able to filter is something much in demand among dating app users — and is a feature many find worth paying for. That fits into Tinder’s strategy in terms of finding new ways to monetize its product.

So far, the company has done very well on that front — Tinder generated a whopping $1.2 billion in revenue in 2019 thanks to its premium subscriptions and in-app purchases. Overall, Match Group made $2.1 billion in 2019 across a suite of dating apps that also includes OkCupid, Plenty of Fish, Hinge and others, it said.

In addition, Tinder will also soon roll out new social engagement features, which the company describes as a way for users “to express themselves and show their interests. This is something Tinder believes is important for the Gen Z market, in particular.

Based on the screenshot provided, these appear to involve a set of text and photo prompts that encourage people to be more thoughtful with their conversations. For example, prompts may include things like: “a life goal of mine is…”, “a social cause I care about is…,” “biggest risk I’ve ever taken is…”, “best travel story…”, “believe it or not I…,” and so on. 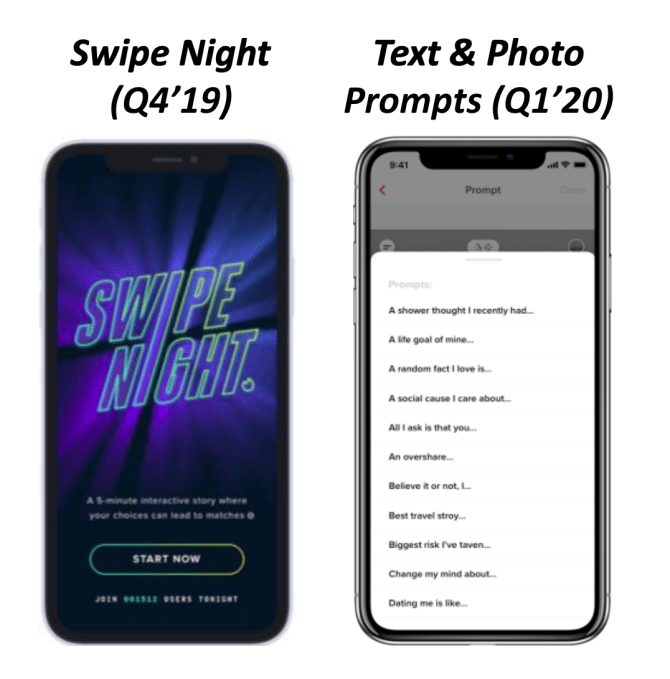 Match Group’s latest acquisition, Hinge, used a similar set of prompts to help users craft more engaging profiles that showcased their personality, not just their looks. Tinder, however, didn’t get into the product specifics.

The company also confirmed that its in-app, choose-your-own-adventure style story called Swipe Night will roll out to 10 new markets this quarter, in parts of Europe and Asia. Tinder had previously announced international ambitions for Swipe Night, after the U.S. launch was viewed by millions of users and led to double-digit increases in matches and messages.

Tinder’s product plans aren’t limited to the above in 2020. The company said it has a number of new ideas in the works, especially in the area of à la carte options.

These options will give Tinder users, especially power users, more advantages and benefits.

“On a platform such as games, you pay for advantages and it lends itself more to a consumable pay model,” explained Match Group President Shar Dubey, soon to be Match Group CEO. “Up until about three years ago, we had only pay-for-access subscription models on most of our platforms. Then we started experimenting with a couple of pay-for-advantage features, on Tinder particularly. And they’ve done really well and they already contribute north of 25% of our direct revenue,” she noted. “So we think we have a real opportunity to do more on the pay-for-advantage area and hence the focus on à la carte,” Dubey said.

The company also highlighted its recent investment in new safety features, powered by Noonlight, and said this rollout would be Tinder’s main focus in the first half of 2020.