2019 was a breakout year for Spotify’s podcasting efforts, and now the company is turning up the dial on its ability to monetize this popular form of audio programming. Today, at the Consumer Electronics Show in Las Vegas, Spotify is announcing Streaming Ad Insertion (SAI), its new, proprietary podcast ad technology for Spotify Podcast Ads.

In previous years, podcasts have been delivered by way of downloads from RSS feeds, which would make this sort of data collection difficult if not impossible. The shift to streaming changes that, as Spotify can tap into its suite of planning, reporting and measurement capabilities, as it does for streaming music.

At launch, Spotify’s SAI technology will only be made available to its original and exclusive shows. That’s because Spotify can control this content and knows what its backend looks like, making the new technology easier to implement. 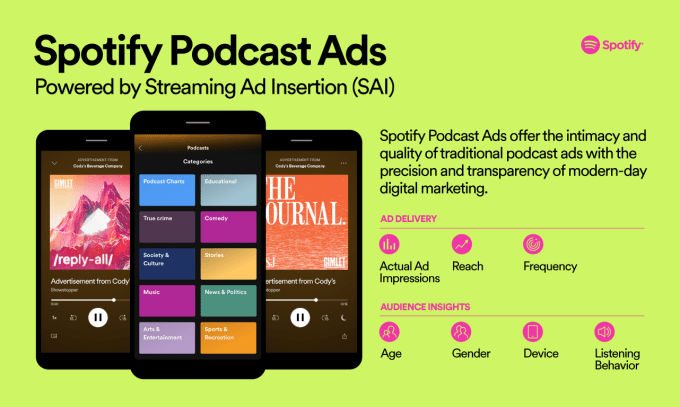 Podcast listeners are already more engaged with advertising often because the ads included in a podcast are read by the host or hosts themselves, making them feel less like an unwelcome interruption and more like a form of influencer marketing. SAI aims to improve the ad experience even more because the ads will be better-targeted and data-driven, like other modern-day digital marketing.

Early adopter Puma was the first partner to try out SAI by running host-read ads during the Spotify Original podcast, “Jemele Hill is Unbothered.” The ads resulted in ad recall lift of over 180%, Spotify says.

Today, Spotify has hundreds of originals and exclusives where it can leverage this technology at a time when podcast listening on its platform is growing. Podcast hours streamed jumped up 39% quarter-over-quarter in Q3 2019, and Spotify now touts over 500,000 podcasts on its platform.

“The problem we’re solving with Spotify podcast ads is really on the advertiser’s side — advertisers have no idea how their ads are working. They don’t even know whether or not an ad they purchase is being consumed by a listener,” said Jay Richman, VP, head of Global Advertising Business & Platform, speaking about the new ad technology at a press event during CES this week. The new technology, he continued, was a “first of its kind.”

“It introduces new targeting measurements and interactivity, which is a big step change for the industry,” he said.

Streaming ad insertion technology will give Spotify a way to better compete with the default podcast apps from Apple and Google. The former, Apple Podcasts, still claims the majority of podcast app market share — but that’s been slipping as Spotify gains. While Apple is rumored to be working on its own podcast originals, Spotify is speeding ahead to the next step of turning its shows into new revenue drivers.

Spotify’s new ad tech launch also comes at a time when the podcast industry itself is changing. Many podcasts today are really just audio programs, as they’re only accessible to a streaming service’s users — not the wider web.

General interest in podcasts is climbing, too. The number of people who are monthly podcast listeners in the U.S. is expected to climb to 106 million by 2023, Spotify notes. Meanwhile, ad revenue for podcasts is projected to reach over $1 billion in 2021. Spotify doesn’t disclose its revenue from podcasts, specifically but in Q3 2019 its ad revenue grew 29% year-over-year to $189 million — a boost many attributed to podcasts.