The once-king-of-the-hill smartphone vendor, which had a terrible 2018, continued to bleed last year, according to financial disclosures it made on Monday.

HTC reported revenue of 10,015 million TWD ($333 million) in 2019, down 57.8% from 23,741 million TWD ($789 million) it posted the year before, and a whopping 87% below the more than $2 billion it grossed in 2017. As Bloomberg columnist Tim Culpan pointed out, Apple now generates more from selling AirPods in a fortnight than HTC clocks from selling each of its offering in a year.

The drop in revenue comes as the Taiwanese firm scales back its smartphone business — a sizeable portion of which it sold to Google two years ago — and focuses on virtual reality headsets and accessories.

HTC has yet to disclose how much money it lost in the quarter that ended in December, but in the other three quarters last year, it lost 7.05 billion TWD ($234.4 million).

Last year, HTC made significant changes to its smartphone strategy in many nations, including India, the world’s second largest smartphone market. HTC no longer sells flagship and other high-end smartphones in India, and instead focuses on mid-range handsets. 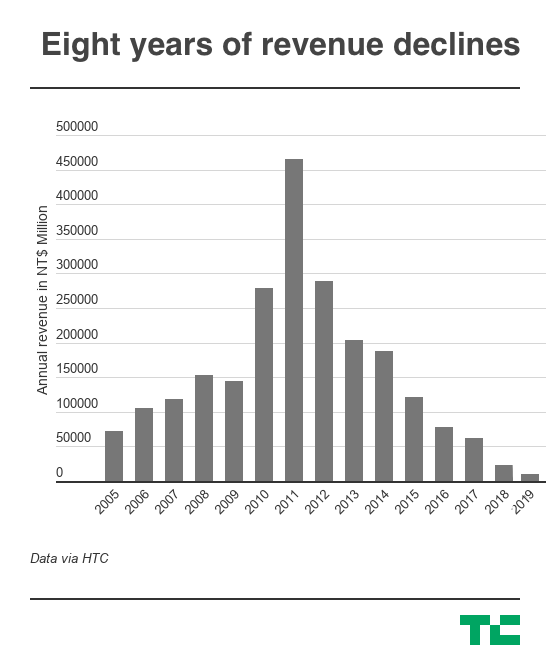 In September, HTC appointed a longtime telecom vet, Yves Maitre, as its new chief executive officer. In an interview at TechCrunch Disrupt last year, Maitre candidly opened about the once-iconic firm’s recent performance, saying HTC had “stopped innovating in the hardware of the smartphone.”

“And people like Apple, like Samsung and, most recently, Huawei, have done an incredible job investing in their hardware. We didn’t, because we have been investing in innovation on virtual reality,” he said.

Maitre has said that in the future the company will focus on virtual reality headsets and many of its applications, such as training and education. In recent quarters, HTC has launched Vive Pro Eye headset for enterprises, revamped its consumer-facing VR headset to better compete with Facebook’s offering, and produced VR works at the Venice Film Festival. It has not disclosed how many VR headsets it has sold.

The company has also launched a 5G-enabled mobile hotspot for users who don’t want to commit to a 5G smartphone just yet to enjoy the faster download speed (provided their local carrier supports it). It also refreshed its blockchain handset lineup in October last year, adding a cheaper variant to the mix.