If you think times are bad at Apple, spare a thought for HTC, the once king-of-the-hill phone maker that continues to struggle very badly.

The Taiwanese smartphone company, which offloaded a portion of its business to Google for $1.1 billion and is pivoting to VR, laid off yet more staff in 2018 and had its worst year of sales ever.

According to its own figures — and as noted by Bloomberg’s Tim Culpan — the company brought in just 23.74 billion TWD ($770 million) in revenue over the entire year. That’s the first time it has grossed less than $1 billion during a year as a public company.

That figure represents a massive 62 percent drop on HTC’s paltry revenue for 2017 — 62.12 billion TWD, around $2 billion — which was its poorest year since 2005. We don’t yet know the total loss for 2018, but its three previous quarterly reports combined amount to a total operating loss of 11.13 billion TWD, $361 million, with one more quarter to add. 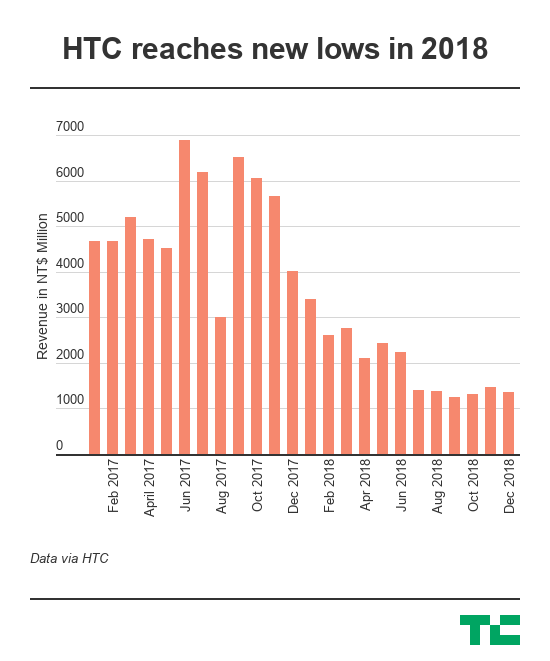 HTC’s 2018 total was so bad that it actually made more money during just one single month a few years ago. Its total revenue during May 2013, back when phones like the One M7, One Mini and One Max made it one of the best smartphone companies on the planet, came in at 29 billion TWD.

Those days of booming sales are, of course, long gone as these charts painfully illustrate.

The decision to sell a large chunk of the smartphone business to Google one year ago was the icing on the cake served at HTC’s smartphone wake. Yes, the company did announce the U12+ — with a squeezable side — in May and it is working on a blockchain phone that we kind of got a look at during our Shenzhen event last year, but these are peripheral plays that are tucked well away from where the mainstream players are dueling, a place where HTC used to be. 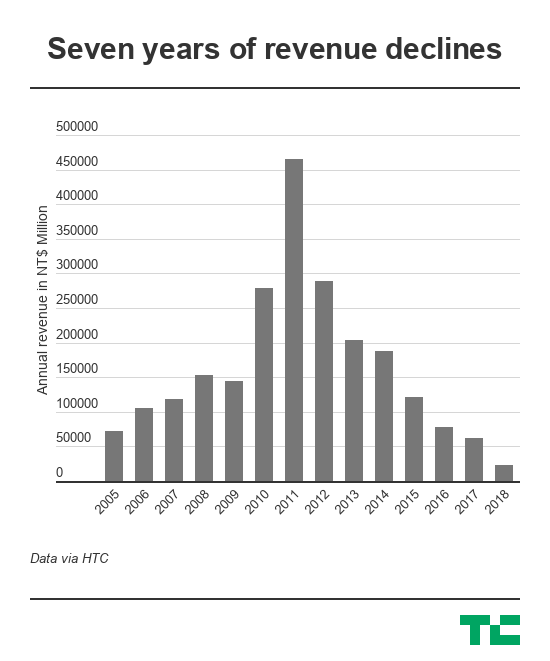 Even VR, trumpeted as HTC’s great area of hope, is a long-term play.

The company doesn’t break down revenue — that’ll come later when it releases its next earnings report in February — so we don’t know how its Vive and other virtual reality plays are working out in terms of numbers. But the immediate future isn’t great.

Lucas Matney — TechCrunch’s resident virtual reality cyberpunk — noted just this week that 2019 is shaping up to be a very testing year for the entire VR and AR industry, HTC/Vive very much included.

“There are plenty of reasons to be long-term bullish on AR, but the time horizons some have espoused seems to be bogus and pitch decks organized around a near-term spike in phone-based or glasses-based users are going to have a tougher time being taken seriously in 2019,” Matney wrote.

In many ways, it’s hard to not feel sorry for the company. Pivots this brutal are usually carried out by private startups who can keep the contents of their books to themselves, rather than 22-year-old public companies that must file financial statements. Unfortunately for HTC, information like monthly sales, losses and other revealing data will continue to be public information, ensuring that this painful transition continues to play out with full public scrutiny.

Despite an incredible downturn in success, co-founder, president and CEO Cher Wang continues to run the business with no calls for a change in leadership. Wang keeps a low profile and has said little of her plans to turn things around. Maybe 2019 is a good year for being more forthcoming, especially if the losses continue to mount, as seems inevitable.